Get to Know The Cast of ‘The Today Show’ 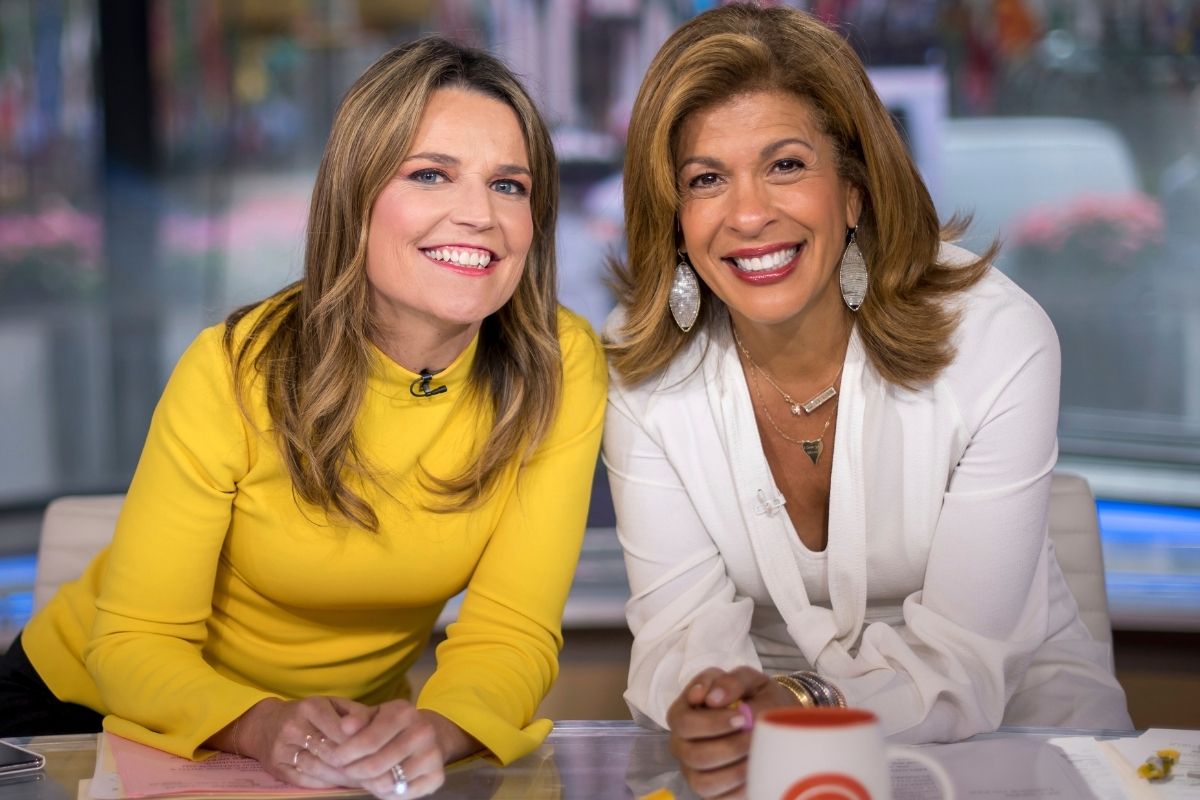 The TODAY show cast ha has been on the air for decades, bringing the news laughs and covering current events on weekday mornings. Bringing the fun during this covid ridden year, the staff festively dressed up for Halloween. Sgheinelle Jones and Dylan Dreyer showed up as Velma Kelly and Roxie Hart from Chicago. Craig Melvin joined in the fun as Alexander Hamilton from the Hamilton musical. Of course, Al Roker joined in the fun dressed as another Hamilton character, King George, because he felt “regal.” Jenna Bush Hager paid homage rot the always-popular musical Cats as the character, Grizabella. Hoda Kotb joined Savannah Guthrie in “Wicked” costumes as Glinda and Elphaba. Get to know this fun bunch below, the Today show cast!

Al Roker is one of the faces of the Today show cast members that looks familiar to everyone! He has worked at the show since 1996. He is a weather anchor and a 3rd hour today host. Before TODAY, Roker was working in Cleveland at an NBC station. He has since been awarded an American Meteorological Society?s prestigious Seal of Approval, named New York magazine best weatherman two times, and has won three Daytime Emmy awards. He hosts “Off the Rails” with Dylan Dreyer and Sheinelle Jones, alongside ?Cold Cuts with Al Roker? on YouTube.

He also holds a record for the longest uninterrupted live weather report broadcast. In November 2020, Roker unfortunatly revealed he was diagnosed with prostate cancer back in September 2020. He did note that he was going to fight to get better, and wasn’t planning on going away from the show anytime soon. Rocker is currently married to fellow journalist Deborah Robeters who has reported for both NBC and ABC.

Another Well-known and loved face amongst the Today show cast is Hoda Kotb. Fun Fact, did you know she is Egyptian? Both her parents are from Egypt and her family lived there for a year, as well as Nigeria. She has been apart of today’s family since 1998 and has hosted many segments. She is a co-anchor of NBC News TODAY and the 4th hour with Jenna Bush Hager, whom she previously hosted with Kathie Lee Gifford. On SiriusXM, she hosts “Thd Hoda Show on SiriusXM.”

She is the author of four books, “Hoda: How I Survived War Zones,” “Bad Hair, Cancer and Kathie Lee,” “Ten Years Later: Six People Who Faced Adversity and Transformed Their Lives and “Where They Belong.” Since 2013 Kotb has been ina relationship with Joel Schiffman, announcing she was engaged on November 25, 2019. On February 21, 2017, she announced on Today that she had adopted a baby girl named Haley Joy Kotbh, and later adopted a second girl named Hope Catherine Kotb on April 16, 2019.

Co-anchor of the Today show Savannah Guthrie has worked for the TODAY Show since the 2000s. She started as a legal analyst and correspondent and was a white house correspondent and The Daily Rundown co-anchor. In 2018, she was included in Time magazine’s ‘Most Influential People of the Year’ list. Since 2009 she has been dating Democratic political and communications consultant Michael Feldman. They married on March 15, 2014, in which two days later Guthrie announced she was four months pregnant. They are now parents to Vale, born in 2014, and Charles Max born in 2016.

Craig Melvin is a weekday news anchor for NBC New’s TODAY and is a today show host in the 3rd hour. He is a host of tv show Dateline NBC and an MSNBC anchor. He had covered carious stories like Sandy Hook and other school shootings. In politics, he’s covered multiple democratic and republican conventions and interviewed notable figures like John Kerry, Joe Biden, Condoleezza Rice, and many more. He was named ‘Best Anchor’ in 2007 by the South Carolina Broadcaster’s Association and was has won a total of three Emmy Awards. Melvin is currently married to then ESPN sports anchor and former WRC-TV sports reporter Lindsay Czarniak. The couple married in 2001 and have a son, Delano, born in March 2014, and Sybil, born in November 2016.

Carson Daly does a lot on the NBC network since he joined in 2013. He is a host on The Voice and worked on the Today’s Orange Room. He started as a DJ, and they moved to Los Angeles. Shortly after, he was brought on board by MTV to host and be an executive producer for “Total Request Life” in New York City. He now hosts the Last Call with Carson Daly, where he gives many bands and artists their first big break. He married his wife, Siri Pinter, who is a food blogger in 2015. They have four children together, Jackson, Etta, London, and Goldie.

Before she joined the TODAY show in 2005, she was a reading teacher in Baltimore, Maryland. Currently, she works as a 4th-hour host with Hoda Kotb. Hager is also an editor for “Southern Living” Magazine. Hager is also an author, writing “Sisters First” and “Ana?s Story: A Journey of Hope,” and children’s books called “Our Great Big Backyard,” and “Read All About It.” Fun Fact, she is a graduate of UT Austin! Her and her twin sister, Barbara, are the daughters of the 43rd U.S. President George W. Bush and former First Lady Laura Bush. She is currently married to Henry Chase Hager and have three children, Margaret, Poppy, and Henry.

Jones co-hosts the NBC New’s TODAY 3rd hour and is a mid-week correspondent. She is one of the “Off the Rails” show hosts with Al Roker and Dylan Dreyer. She is a graduate of Northwestern University’s Medill School of Journalism and has interviewed several notable figures, including and celebs like Kevin Hart, Martin Sheen, Barack Obama, and Hillary Clinton. Jones is a member of the National Association of Black Journalists, the Alpha Kappa Alpha Sorority Inc. Jones Married her husband Uche Oheh back in 2007 and have three children together.

Dylan Dreyer is the weather anchor and meteorologist for Weekend TODAY and a co-host for The TODAY Show‘s 3rd hours. On the weekend, she hosts with Willie Geist. She is an NBC Nightly News co-host as well. She also hosts an XM radio show “Off the Rails” with Al Roker. She was named Boston’s Best Meteorologist in 2008. She was born in Manalapan, New Jersey, and graduated from Rutgers University in 2003 with a bachelor’s degree in meteorology. She married Brian Fichera in 2012 and currently has two children, Calvin and Oliver.

A co-anchor of Weekend TODAY, Peter Alexander, is also a White House correspondent. Peter is an Emmy award-winning journalist. He reported from the 2018 Winter Olympics in South Korea and led the Supreme Court Justice Brett Kavanaugh hearings. He often speaks about his sister, Rebecca, diagnosed with Usher Syndrome. He married Alison Starling in April 2012, who is an anchor at WJLA-TV and share two children together. He was nominated for the ‘Outstanding Live Coverage of a Breaking News Story ? Long Form News & Documentary Emmy Award’ for his coverage in the NBC News Special Report: The Death of Pope John Paul ll documentary.

Another host of NBC New’s Sunday TODAY is Willie Geist. He’s regularly contributed to TODAY as well as MSNBC’s Morning Joe show. He’s the author and has been on The New York Times Bestseller list with this book “Good Talk, Dad,” “American Freak Show: The Completely Fabricated Stories of Our New National Treasures”, and a self-help book called “Loaded! Become a Millionaire Overnight and Lose 20 Pounds in 2 Weeks or Your Money Back”! Geist also dived in the Hollywood world, voicing for Kung Fu Panda 3 opposite of Al Rocker’s Dim. He is a frequent guest on Andy Cohen’s late-night show Watch What Happens Live and has appeared twice in People Magazines ‘Sexiest Man Alive’ issue in 2012 and 2018. He married his high school sweetheart Christina Sharkey in 2003 and share a daughter Lucie and son George.