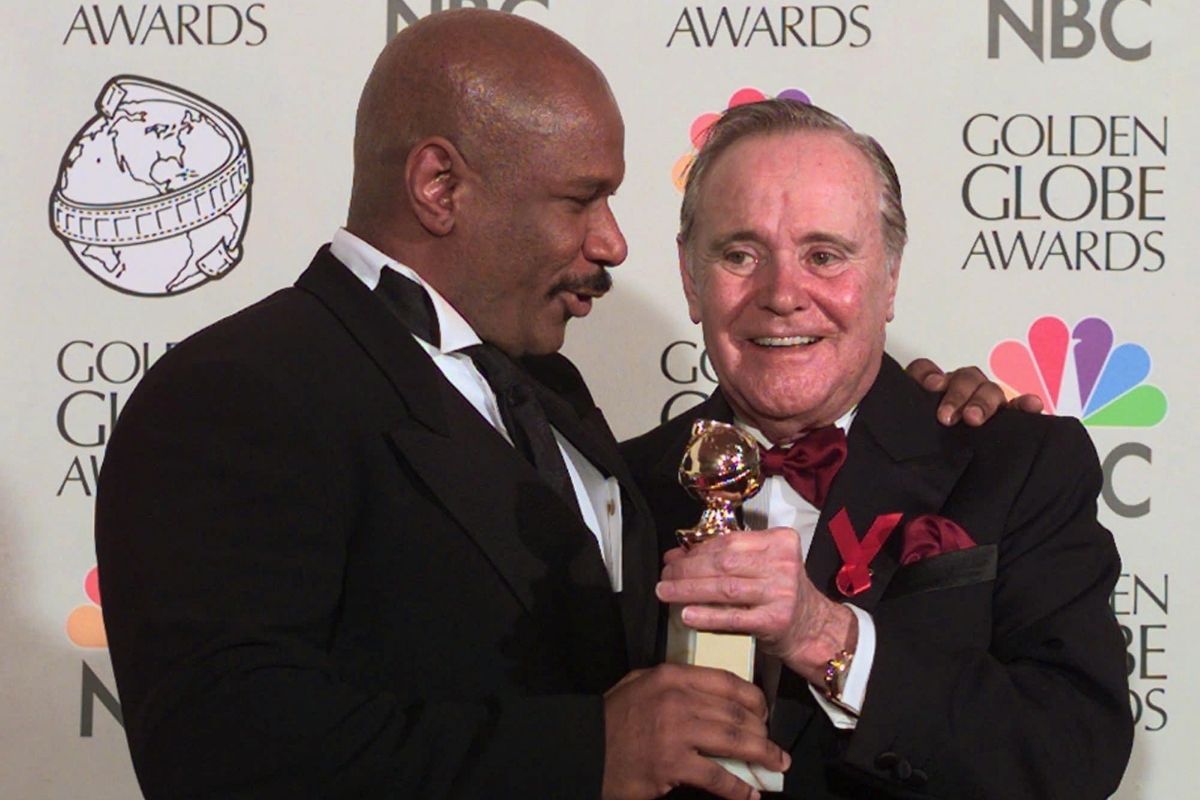 Everyone loves an unexpected, surprising moment at an awards show and the 1998 Golden Globe Awards, held at the Beverly Hilton in Los Angeles, California, provided one for the ages. It’s not unusual for an award winner to recognize and thank the fellow nominees in their category, but the common follow-up is an acceptance speech and many proud photographs posing with the award. When Ving Rhames won the Outstanding Lead Actor in a Miniseries or a Movie Golden Globe for his role in HBO’s Don King: Only In America, he not only asked the audience to applaud for every other contender in the category, he asked fellow nominee Jack Lemmon to join him on stage and insisted Lemmon accept his award.

At the time of the 1998 Annual Golden Globes Awards, Jack Lemmon had been a Hollywood icon for decades. He was famous for his roles in such countless classics, and in addition to two Oscars, he had already won four individual Golden Globes—three Best Actor awards for Some Like It Hot, The Apartment and Avanti! and the Cecil B. DeMille Award, which is an honorary award given for “outstanding contributions to the world of entertainment,” per the IMDB. In 1998, he was nominated for the 19th time for his role in the TV movie remake of the classic Broadway play 12 Angry Men. This was Ving Rhames’ first Golden Globe nomination and first win.

After he was announced as the winner, Rhames took to the stage and tearfully addressed the audience, thanked his fellow nominees, Armande Assante, Matthew Modine, Gary Sinese, and Lemmon, and asked the audience to give them all a round of applause. As if that wasn’t enough, Rhames then followed up by asking if Jack Lennon was in the audience and requested that he join him on stage, as reported by Today.

When Lemmon arrived at the podium, Rhames told him “I feel that being an artist is about giving and I’d like to give this to you, Mr. Jack Lemmon, it’s yours.” Lemmon tried to return it to Rhames, who refused, and called the gesture “one of the nicest, sweetest moments I’ve ever known in my life.” He went on to note that he appreciated “the art in [Rhames]” and called his performance as Don King “brilliant.” Lemmon carried the statue off stage as the audience, which included celebs like Jack Nicholson and Jodie Foster, gave the pair a standing ovation. Rhames eventually got his own duplicate award from the Hollywood Foreign Press.

Don King: Only in America

Not Everyone Loved Ving Rhames’ Gesture

As noted by the website Shadow and Act, “Rhames was criticized by some within the Black community for the act….given how terribly infrequent it is that Black actors win anything at these major awards ceremonies; and so the act of a Black actor willingly giving his earned recognition to a white actor he felt was more deserving, was, for some, reflective of a “colonized mind.”” Ving Rhames was only the sixth Black actor to be nominated in the category Best Performance by an Actor in a Limited Series, Anthology Series, or a Motion Picture Made for Television and was the very first Black winner. In fact, he and Idris Elba remain the only Black actors to win Best Actor Golden Globes in that category.

A scene in Spike Lee’s 2000 film Bamboozled in which the character “Pierre Delacroix gives his Academy Award win to Matthew Modine because he feels he’s more deserving” in a dream sequence is a dig at Rhames. When asked about it in a 2000 interview with Newsweek, Lee replied “When you give your award to a man you never met in your life, what do you expect? That sent chills down my spine, to see him do that to an award he earned.”

Jack Lemmon actually went on to win the Best Performance by an Actor in a Miniseries or Motion Picture Made for Television Golden Globe in 2000 for his role in Inherit The Wind. He died on June 27, 2001.