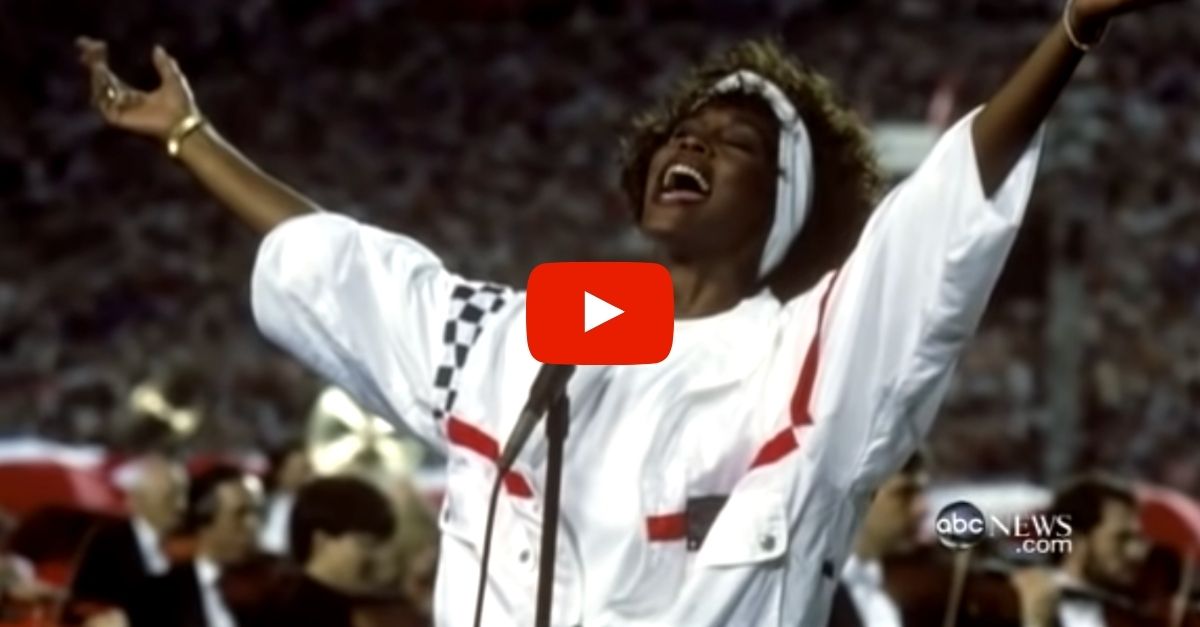 Whitney Houston is known as one of the greatest artists of all time. Her ability to sing the highest note possible brought her stardom in 1985, with her debut self-titled album. But it was 1991, during her Superbowl performance of The Star-Spangled Banner, that confirmed her career as one of the biggest voices on planet Earth.

I’m not going to lie, this brought tears to my eyes the first time I heard it. Confession: I still cry watching it to this day. It’s easy to say that no one can compete with Whitney Houston. At the NFL’s Super Bowl XXV between the New York Giants and the Buffalo Bills, Houston performed one of the most incredible performances of The Star-Spangled Banner to date with 750 million people watching that night. The big game came at a restless time for the United States as it had just entered the Gulf War in order to liberate Kuwait — just 10 days prior to dropping the first bomb on Iraq in what was became Operation Desert Storm.

So although circumstances around in the country were tense, the Super Bowl in Tampa Bay Florida kicked off with a very patriotic performance by Whitney Houston. Sure enough her rendition of the National Anthem brought Americans tears of love, hope, and gratitude. Wearing red white and blue, Houston, who was just 27 at that time, starts off by waving at the crowd who were cheering their life away, as she showcased her amazing vocal range for her version of the National Anthem. With a Florida Orchestra playing in the background, the singer begins those famous words, “Oh say can you see…? and it’s immediately apparent that the superstar is about to do something special.

The singer-songwriter went on to sing the song, hitting every high moment flawlessly. You can see the crowd and US soldiers saluting and singing along as a camera and pans to a close-up on Houston’s face. As her voice radiates through the speakers, you can also sense a self-assured and calmness as Houston flashes her perfect smile before the appreciative audience. As she gets to the “And the rockets red glare,? Houston belts notes that most singers only dream of.

Honestly, it’s hard to believe that any human can sing this way, especially at a sporting event, but she did and so gracefully. She took the song to a whole other level, with her voice radiating through the Tampa stadium speakers showing us why she deserved all those Grammy Awards. If Houston’s version doesn’t give you chills, I don’t know what will. Her voice is literally soul-touching. I’m sure many fans will always remember that performance because, well, it was a truly epic one. As expected, at the end of the song several spectators go absolutely bonkers as a Fighters Jet flew over the stadium.

Houston’s performance went down as one of the most memorable and important moments in Super Bowl history. Safe to say that Houston was so breathtaking to watch that even though the star isn’t around anymore, people can still connect with her music every day. Some artists have musical abilities out of this world and she was definitely one of them. Houston rendition paved the way for other artists to continue the tradition, such as Jennifer Hudson, Carrie Underwood, Lady Gaga, Beyonce, Christina Aguilera, and Demi Lovato to name a few.

Editor’s Note: This article was originally published on September 17, 2020.