A Cook County couple marked the first marriage of 2018 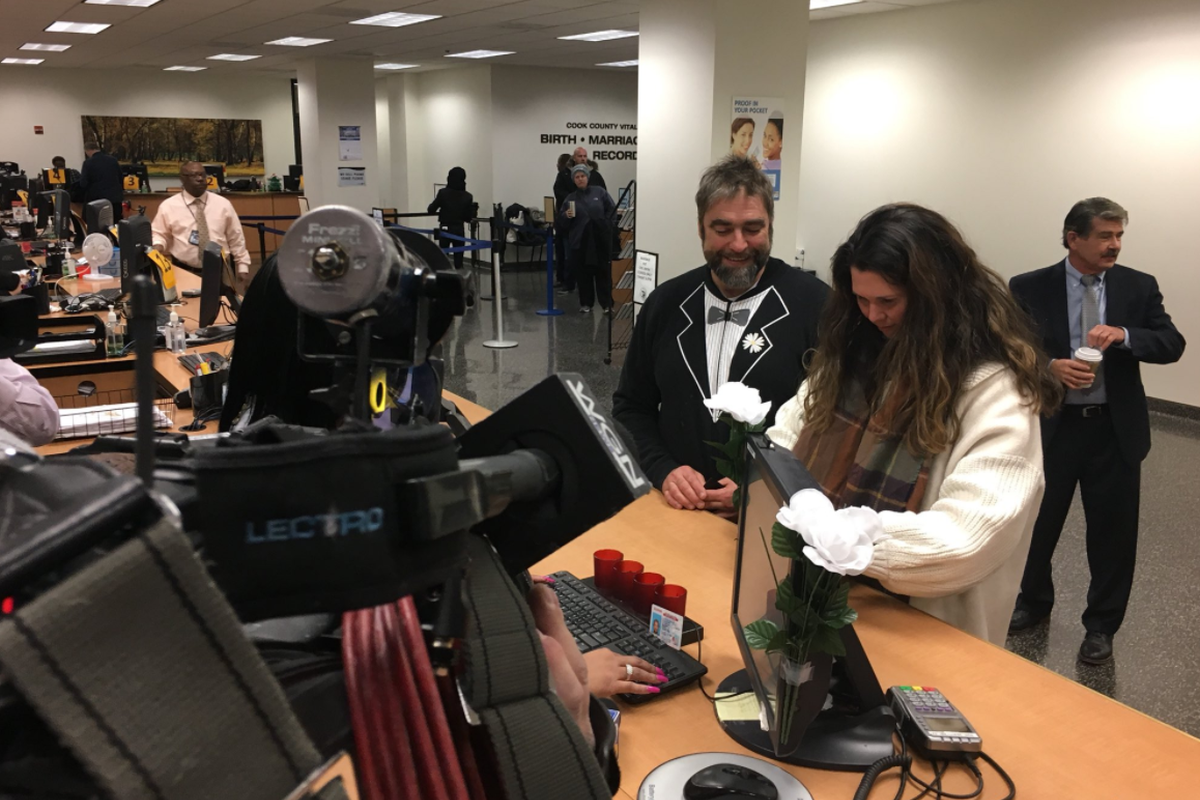 For the last time, Cook County Clerk David Orr performed the first wedding of 2018 on Tuesday. He isn’t going for re-election, so it was his pleasure to serve the first marriage license of 2018.

Since 1991, Orr has married the couple to obtain the first marriage license of the year, providing donated gifts for the newlyweds. It?s a tradition that is now coming to an end, as Orr is not seeking an eighth term in office.

Brian Wildeman braved a warm tuxedo shirt as the festive attire and his fiancee, Susie Fogle, was armed with cookies for the security guards. They huddled in the stairwell of Daley Plaza on Tuesday just before 4 a.m. so they could claim their spot in line to get their marriage license when the Cook County Clerk?s office opened at 8:30 a.m. and get married on the spot.

After 5 years together, Brian Wildeman and Susie Fogle, from Woodlawn, got married at the George W. Dunne Cook County Office Building on Tuesday.

?We already have our daughter which is great and we?re already living together. We?ve already hit so many milestones that it seemed like a traditional wedding wasn?t a good fit,? said Fogle, 35, a nanny.

?It?s an adventure,? said Wildeman, 49, a teacher. ?Getting up super early is sort of like getting up to go on a trip or something like that ? getting up really early and planning part of it in advance and you don?t really know what?s going to happen.?

Wildeman and Fogle, both who did not have to work Tuesday, had to do a little research on how early past couples staked their place in line, set their alarm for 3 a.m. at their Woodlawn home and talked to security guards once there to find out which door would be unlocked first. Their efforts paid off.

?We considered, like, would we try to buy off another couple, what would we do? And then we talked about it, and we were like, ?If someone gets here earlier than that in negative 25-degree wind chill, we?ll shake their hands,?? Susie said.

It turned out another couple arrived about an hour after Brian and Susie.

?They stood in line behind us. The mother came. She was crying. It was little bit awkward,? Susie said. ?We think they?ve been in Chicago all weekend, like in a hotel for this purpose.?

?It?s kind of an adventurous way to do it, too, so it?s fun, and it?ll be a fun surprise when we do announce it to our friends and family,? Brian said.

The exchange of the rings wasn?t as smooth as intended, after Susie got the ring on Brian?s finger, the bride and groom shared the first Cook County wedding kiss of the year.

Since he started presiding over weddings for the new year 27 years ago, Orr has missed only one ceremony.

?People from everywhere, and different backgrounds, and why they happen to be getting the license right now. Many of them have kids,? he said. ?A lot of good people we?ve met over the years, and I guess it?s fun when I run into couples sometimes I barely remember, ?Oh yeah, you married us.??

As their wedding gift from the county, The Wildemans not only received their marriage license for free, but got vouchers for a free hotel stay; dinner for two; flowers; a cake; and tickets for shows like Riot Fest, iO Theater, and the Chicago Shakespeare Theater.

RELATED: Forget the Feds: This Cook County Commissioner is appealing to the UN to help with violence in Chicago

?This is such a fun thing, given government we have our share of problems. So it?s a fun thing, lots of nice goodies,? Orr said.

Brian and Susie planned to take a trip to Tokyo for their honeymoon. Their 2-year-old daughter likely will join them, though Susie joked Orr could offer to watch the child while they?re away.