Yesterday, superstar Patrick Kaner traded in his hockey mask for a hard hat as he toured the new Blackhawks Community Ice Arena.

RELATED: The ’09-10 Chicago Blackhawks team was just voted one of the top 20 NHL teams of all time

Join @88PKane as he tours what will become the new Blackhawks Community Ice Arena just a few blocks south of the @UnitedCenter! https://t.co/lHbZHawDxP

According to the Blackhawks’ website, the rink will be the coldest place on ice, even in the summer months:

“The facility will house year-round youth hockey development programs, recreational leagues and events and serve as the practice facility for the organization and visiting NHL teams.”

Located two blocks south of the United Center near Malcolm X College, there will be two NHL regulation-size ice rinks, and nearly 100 percent of the rink will serve the surrounding community, including young adult, youth and community programs.

The Blackhawks and the Chicago Park District will offer programs to the youth, including open-skate, hockey and figure skate rentals, and the facility is also designed for hosting hockey leagues and tournaments.

RELATED: The Sharpest thing on ice is finally back home in Chicago, and the city could not be more thrilled

Check out more photos of what the inside will look like here, and we’ll see you on the ice in December! 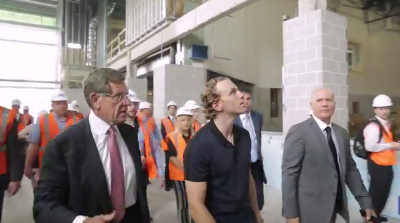