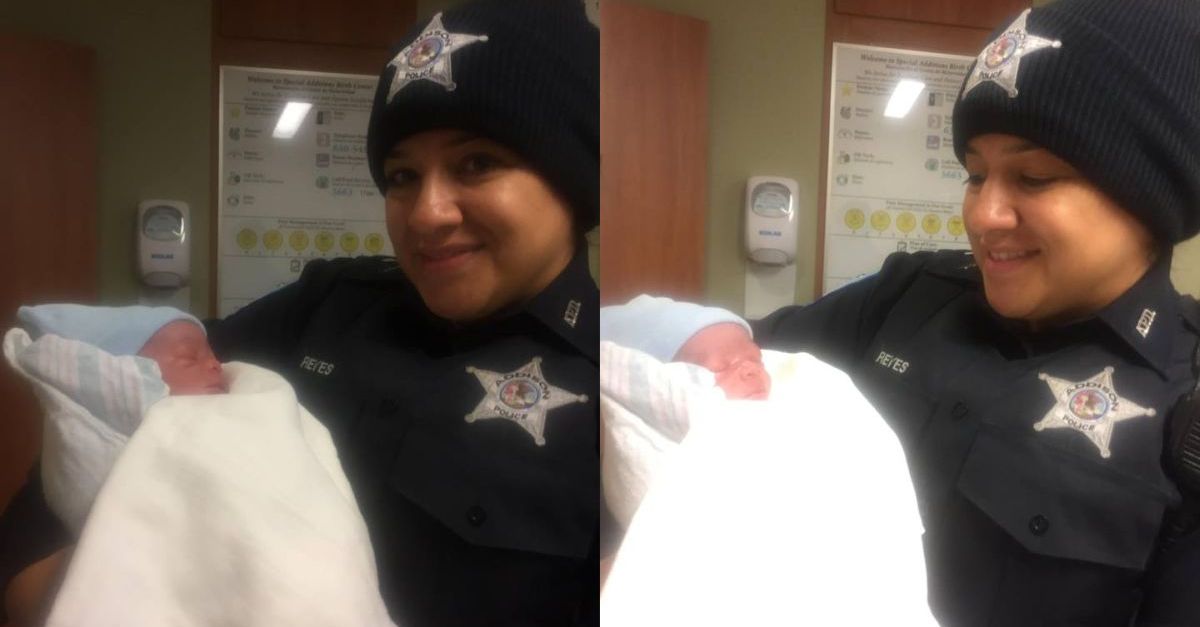 What people are calling a, “Christmas miracle,” wouldn’t have happened if it wasn’t for a 911 operator and a police officer, according to an Addison mother. She said the two helped her deliver a baby boy who arrived much faster than anticipated on Tuesday.

RELATED: Did you ever hear the one about the baby that got a liver transplant…via FedEx?

Addison Officer Maria Reyes was the officer who responded to a dramatic 911 call from a suburban family on Tuesday morning. Sondra Johnson, 29, delivered baby Malachi in her house in the 600 block of Meadows Boulevard. She and her mother-in-law were waiting for her five children and their father to warm up the truck to go to the hospital when the baby started coming about 10 a.m., Johnson said.

“The pain started coming back to back, so I finally stood up and went to the door and the water broke,” she said. “And there goes Malachi.”

Her mother-in-law called 911 but was so “discombobulated” she initially gave the wrong address, operator Tiffany Williamson said.

Officer Maria Reyes happened to be about one block away from the home when a dispatcher sent her to the scene. With the help of the operator, Williamson who was still on the phone, Reyes was able to follow her instructions and safely deliver baby Malachi.

“Your adrenaline begins to rush. It’s very exciting,” Williamson said. “My hands were shaking afterward, but I was able to keep my composure on the phone and give the grandma directions. Inside, it was a ball of nerves for me.”

The birth happened so quickly in fact that the baby actually hit the floor. Johnson handed the officer the baby, who was in the fetal position and whose toes, fingertips and earlobes were blue, Reyes said. It was obvious that he wasn’t breathing right.

Williamson gave instructions about how to clean the baby’s face to clear his airway and asked the grandmother to find a shoe string to tie off the umbilical chord. However, Reyes had already thought quickly and used a latex glove she was carrying. Blood rushed in and the baby gained color.

“He opened up, his arms came out and he was screaming. He was loud,” Reyes said. “I knew that was a good thing.”

Addison Fire Protection District paramedics took mom and baby Malachi — who was 6 pounds 4 ounces, and 18 inches long -to Glen Oaks Hospital in Glendale Heights. The baby, along with his mother, are both are doing well as they recover from what turned into a memorable morning.

Johnson, a stay-at-home mom, said Malachi is her second baby to arrive in a rush. Her youngest child, now 4, was born in Aurora, the birth happened in a car in the parking lot of a CVS store. Johnson and her mother-in law were on their way to the hospital when they pulled over and called 911 because the baby was coming, she said. In both situations, paramedics arrived on time and helped Johnson with her babies.

Unfortunately, Malachi’s father Michael missed the birth because he was still outside warming up the car to take his wife to the hospital.

As for officer Reyes, she went the extra mile and stopped by the family’s home to deliver Christmas gifts to the kids and to celebrate the arrival of their new little brother.