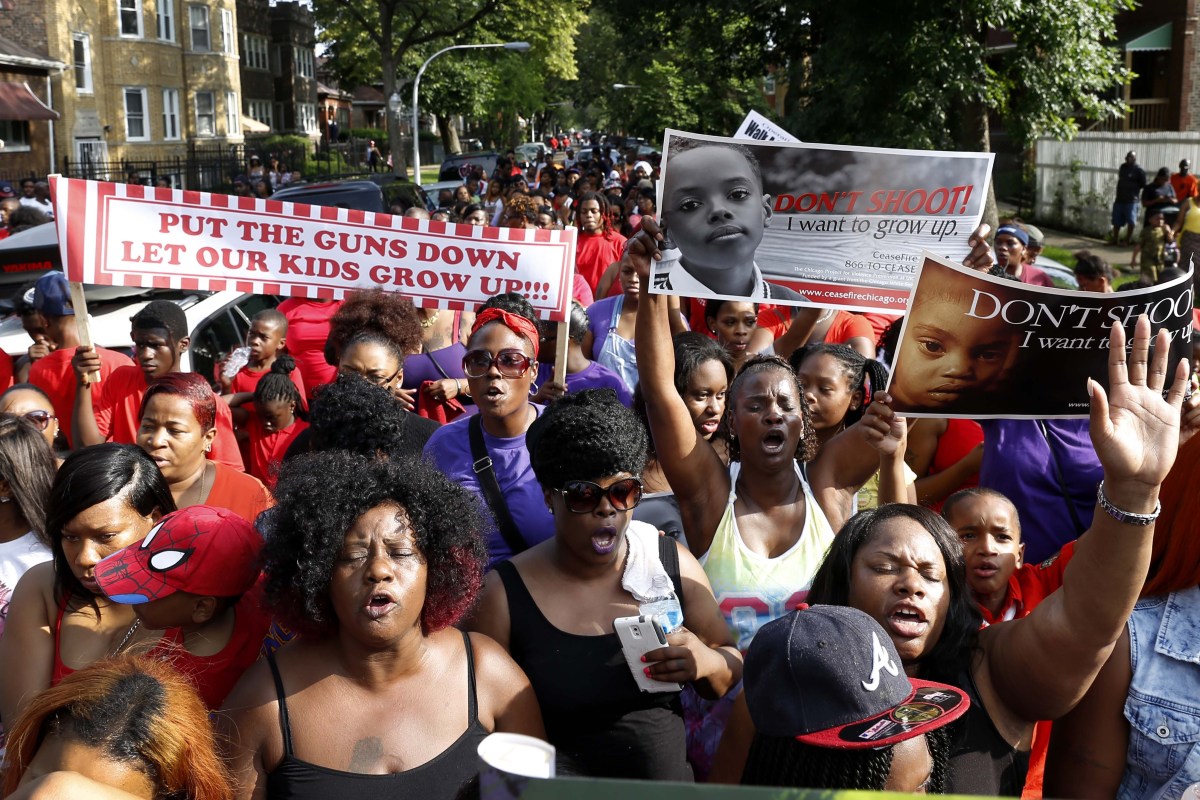 AP Photo/Christian K. Lee
Members of the community march on Chicago's West Side to protest the death of 7-year-old Amari Brown, Monday, July 6, 2015, in Chicago. Brown, who was one of seven people shot to death in Chicago over the holiday weekend, was the son of a gang leader with a lengthy arrest record, and police say the man's refusal to cooperate with detectives highlights the city's ongoing challenge in curbing gang-related violence. (AP Photo/Christian K. Lee)

Aram Han Sifuentes is a master of the sewing machine – beginning the Protest Banner Lending Library last year after the presidential election – encouraging others to make protest banners. She says keeping up has been almost impossible.

Aram and her performance artist husband, Roberto Sifuentes, recently moved into a new home in Budlong Woods, and they say the basement is already crowded with protest banners and shopping bags crammed with piles of fabrics needed for more banners.

But still, the Protest Banner Lending Library lives on, sometimes staying for weeks in an art gallery, sometimes in her basement.

Banners saying, “We Can’t We Won’t We Don’t Stop.”

And her work is now being noticed across the pond as curators at the Design Museum in London are showing one of her banners for the next few months as part of its prestigious Beazley Designs of the Year exhibition, so they asked her to choose a representative work.

She jokingly said she wanted to send a banner that showed the F-word, repeated six times, in cheerful candy colors.

“They were like ‘Uh, how about the one in Spanish, saying ‘Another World is Possible’?”

Aram Han Sifuentes teaches fiber arts at the School of the Art Institute. In the days after the 2016 presidential election, like many – she considered her response. “Soon it became so clear: protest banners. Thing is, I wasn’t comfortable going out to protest — I wasn’t a citizen at the time, I was the mother of a small child.”

Aram grew up in California but is a native of Seoul, South Korea – applied for citizenship after Trump was elected (“You can’t be sure now how policy might change now”). She received citizenship in May, but in November, “I was making banner after banner, and by the Women’s March (in January), I had 20, so I started asking: ‘Hey, who wants to take this to a protest? I can’t.’ Then people started asking if I had anything for them. At first, it was friends on Facebook and Instagram. Then people I didn’t know started asking for banners. Then I thought, ‘A banner lending library. Of course.’ ”

“Now I get emails all the time,” she said, “that’ll say, ‘Need a banner for a Planned Parenthood benefit’ and I can respond: ‘Well, we have a couple of different kinds of those.’ ” Standing in her basement, pulling materials from her Ikea bags, she holds up banner after banner, flipping through slogans (“No Wall,” “Love Resists,” etc.) as giving a presentation of 2017 causes and concerns — police reform, education reform, transgender bathrooms, deportation, Trump.

Through Nov. 16, the Protest Banner Lending Library can be found at Alphawood Gallery in Lincoln Park.