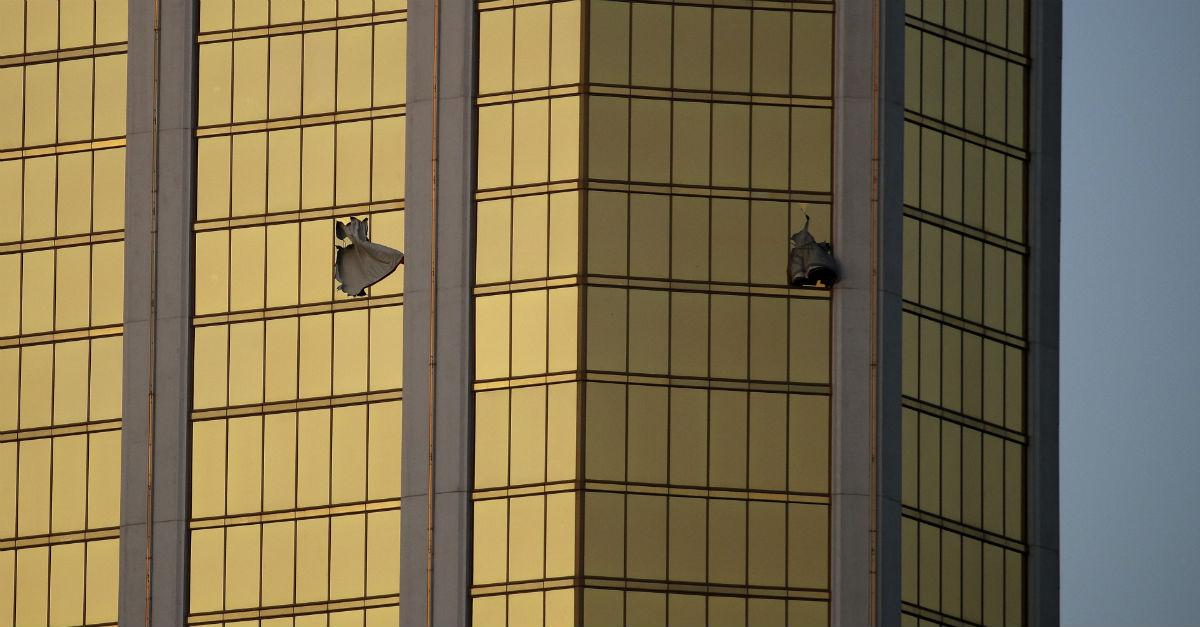 AP Photo/John Locher, File
In this Monday, Oct. 2, 2017 file photo, drapes billow out of broken windows at the Mandalay Bay resort and casino on the Las Vegas Strip, following a mass shooting at a music festival in Las Vegas. From two broken-out windows of the resort, Stephen Craig Paddock had an unobstructed view to rain automatic gunfire on the crowd, with few places for them to hide. Sunday night’s bloodbath left dozens of people dead and hundreds wounded. (AP Photo/John Locher, File)

Elisha Seng was in Downtown Las Vegas, visiting from Bartlett, Illinois, watching Jason Aldean perform on stage right in front of her. It was a memorable time and she wanted to capture it, so she started looking for someone to take a picture of her with the musician in the background.

RELATED: Las Vegas sheriff says what may have been a ?determining factor? in the shooter?s massacre

Then she heard what she first believed to have been fireworks. Her worst fears were confirmed however when she realized those weren’t fireworks. She saw the young woman right behind her suddenly clutch her neck, gasp for breath and pull down one of Seng’s friends as she fell.

“I just keep seeing the image of her eyes and her mouth gasping for air,” Seng said to the Morton Times in a phone interview.

Mike, Seng’s husband reacted almost instantly and covered his wife on the ground with his body as shots fired past them.

They didn’t know it at the time, but they were in the middle of the worst mass shooting in modern U.S. history. Fifty-eight people were killed and more than 500 were injured as a gunman fired from the 32nd floor of the nearby Mandalay Bay Resort and Casino. A point in history that will now be remembered as the Las Vegas Massacre.

Elisha, 46, and Mike, 47, were watching Aldean’s performance about 15 people back from the right side of the stage during the last night of the “Route 91 Harvest Festival.” They were with two friends from Chicago and two young women from Oregon they’d met during the three-day music fest. All of them survived the shooting uninjured.

Elisha said she was later surprised to learn the gunfire had lasted 9 to 11 minutes, to her it felt like the longest hour of her life. They flew home at 3:30 p.m., several hours later than their originally scheduled morning flight.

Elisha had planned to return to work in Schaumburg on Tuesday, but she gave herself another day to try to recover. She claims she has been affected by the events in every aspect of her life back home.

“It’s tough to sleep,” she said. “It’s tough to think about anything. Watching it on TV makes my stomach turn. My body sometimes shakes.”

Though she’s been looking at portraits of those who died, she can’t positively identify any of them as the young woman right behind her who was shot. As for her husband, Mike, he is choosing not to talk about the experience. Even beyond her current shock, Elisha Seng believes the experience may have made some permanent changes to her life and interests. And she isn’t the only one suing for it.

Lawsuits related to the Las Vegas massacre are mounting, as 14 more concertgoers have initiated legal action, including one other victim who was so traumatized after the attack she said she’s mistaken the sound of rain for Stephen Paddock?s deadly gunfire.

The hotel-casino from where Stephen Paddock fired, concert organizers and the makers and sellers of a bump stock gun accessory that enabled him to fire rapidly are named as defendants. The court filings argue that they all share blame for the worst mass shooting in recent U.S. history.

Michelle Simpson Tuegel, an attorney representing victim Paige Gasper, a 21-year-old college student who was left with shattered ribs and a lacerated liver after being shot in the massacre, told Fox News it ?is going to be a long road for all of these survivors, both physically and emotionally.”

The challenge for mass-shooting lawsuits is clearing a high legal bar to prove someone other than the shooter bears any responsibility. Such litigation typically drags for years and can end with victims and their families receiving little to nothing.

A lead attorney in the lawsuits, Chicago-based Antonio Romanucci, echoed that call Wednesday. “These people need answers and are looking for closure and the only way we can get closure is by filing lawsuits and getting information,” Romanucci told FOX5 Las Vegas.

Seng said she joined the civil case to force better security at concerts and at hotels. She said she can’t fathom how a hotel-casino that devotes so many resources to catching gamblers that cheat didn’t notice Paddock bringing in high-powered weapons over a number of days.

“They can catch a person counting cards,” she said. “But they can’t catch someone carrying bags of guns.”