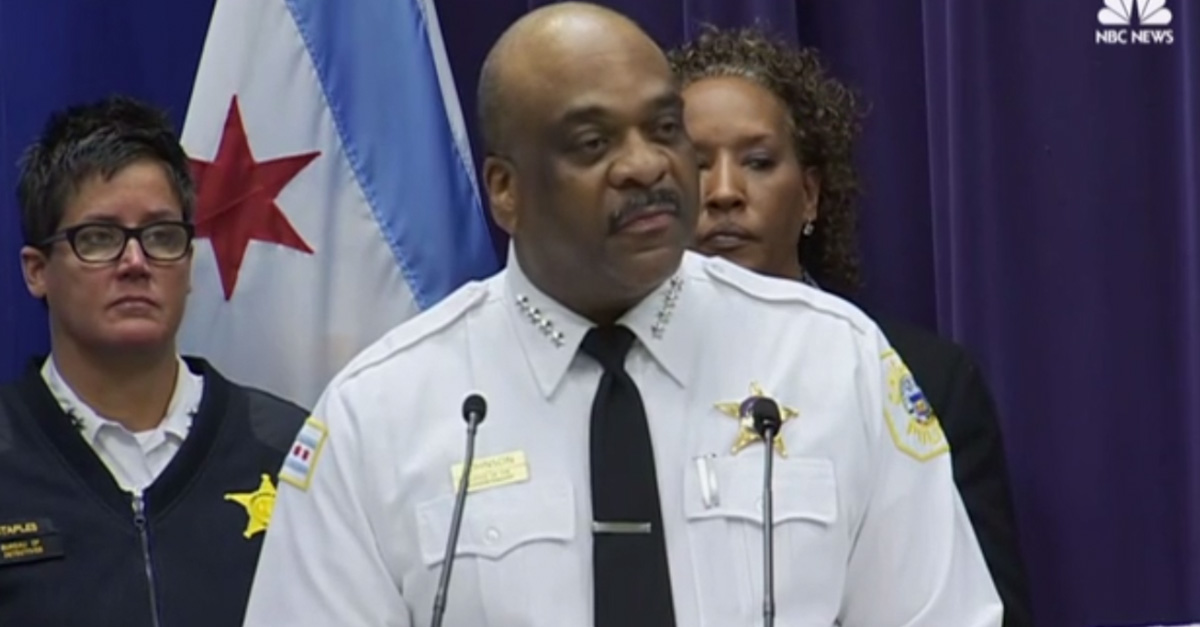 CHICAGO  — An arrest warrant has been issued for a second teenage boy in the sexual assault of a 15-year-old Chicago girl that was streamed live on Facebook, and further arrests are expected, police said Sunday.

A day after announcing the arrest of a 14-year-old boy on sexual assault and child pornography charges, police said they were looking for a 15-year-old suspect in the March 19 attack, which investigators have said involved five or six males. Investigators didn’t specify how many others would likely be charged, but they did say one adult male was among them.

RELATED: A patriotic Chicago teacher received a severe punishment for asking a student to stand during the Pledge of Allegiance

Police were careful not to release too many details of the ongoing investigation, but they did provide some that helped illustrate why Superintendent Eddie Johnson remained visibly upset as he has been since the investigation began.

Commander Brendan Deenihan said that the victim saw one of the suspects, whom she knew, on the day of the attack. She said the suspect “lured” her into the home of one of the offenders in the North Lawndale neighborhood on the city’s West Side, where she also lives.

“She was not allowed to leave and she did not consent to what occurred,” he said.

Police spokesman Anthony Guglielmi said the girl was threatened by suspects, but he would not say what those threats entailed.

RELATED: Another atrocity has been committed in Chicago on Facebook Live — this time it went unreported

Deenihan also said there were multiple cellphone videos made of the attack, not just the one streamed live on Facebook that was viewed by about 40 people — none of whom reported it.

“It disgusts me that we have people who would look at those videos and not pick up a phone and dial 911,” he said.

Deenihan declined to say if either of the teens who are already facing charges streamed the live video. But the charges against the 14-year-old — aggravated criminal sexual assault, manufacturing of child pornography and dissemination of child pornography — suggest that he shot video or took photographs of the attack, Guglielmi said.

Last month, the girl’s mother told The Associated Press that her daughter received online threats following the attack and that neighborhood kids were ringing her doorbell looking for the girl, who hasn’t returned to the neighborhood. On Sunday, Deenihan said police were investigating what he called “social media bullying” and that detectives have “executed social media search warrants” in the case.

He said the girl is traumatized and reluctant to talk about the attack, and that she’s going to need help for a long time. After the news conference, Guglielmi said city officials and the Cook County State’s Attorney’s office have relocated the girl to a “safe place,” but he declined to elaborate.