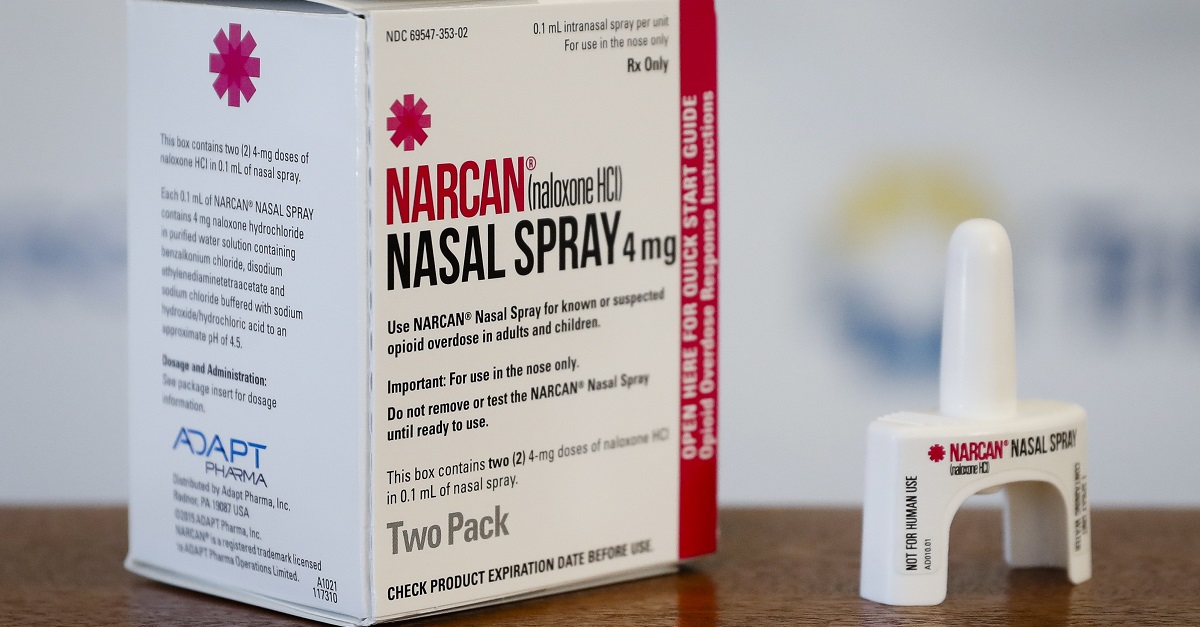 AP Photo/John Minchillo
Narcan is displayed after a news conference to announce a program and pilot study in Hamilton County to more than quadruple distribution of the opioid overdose-reversing drug to 30,000 units in nasal spray form, Thursday, Sept. 7, 2017, in Cincinnati. Attorney General Mike DeWine and representatives of the University of Cincinnati College of Medicine, BrightView Health and Adapt Pharma plan to dramatically expand availability of the drug in the southwest Ohio county stricken by increases in synthetic opioid abuse. (AP Photo/John Minchillo)

The opioid crisis is a national emergency and Chicago has been hit as bad as anywhere else. Over one thousand people died in 2017 in Cook County from opioid overdoses.

Certain areas of the city have been hit worse than others, and now Chicago Police officers in those districts are being trained in how to handle opioid overdoses by properly using an antidote called Naloxone, according the Chicago Sun-Times. Narcan is the brand name of the antidote.

Chicago Firefighters have been carrying Narcan since 2016 and have used it in thousands of cases. Walter Katz is the deputy chief of staff for Rahm Emanuel. ?Often, police officers are first on the scene,” he said. “When it comes to an overdose, every second counts.

Chicago Health Commissioner Dr. Julia Morita agreed with the ever-evolving forms of treatment from both CFD and CPD. ?We really focused in on EMS early on,” she said. “But we?re now engaging very actively in a very targeted and appropriate way with the police.?

?We have to have medications to treat it. We have to de-stigmatize substance abuse disorder so people aren?t afraid to get access to therapy,” Morita added. “We have to have reversal agents available. And we have to do the work to connect individuals to treatment, so they can break the habit.”

The $200,000 will be funded by fines accrued from drunk drivers.

While it may seem like a good idea to get this drug into more hands of first responders, some doctors are skeptical of the use of Narcan in general.

?At some level, this is really just a big public health experiment in which we are collecting data,? he added. Some of the issue is that suspected overdose victims might be given Narcan without having overdosed at all, which can cause further complications.

?Of 100 people who get Naloxone, it?s very likely only one of them would?ve died ? the problem is knowing who that one person is.?

RELATED: Police use Narcan on a 2-year-old boy and question how he overdosed in the first place

But Dr. Patrick Lank of Northwestern Memorial Hospital disagrees. ?It is a life-saving medicine, and without it people absolutely die,? he said. Lank added that those who are given Naloxone should immediately go to the ER.

Narcan is actually available over-the-counter at across 8000 Walgreens stores in 45 states as well.