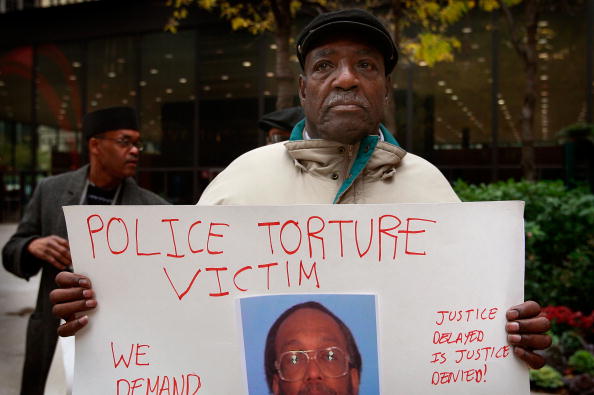 (Getty Images / Scott Olson)
CHICAGO - OCTOBER 27: Aaron Cheney demonstrates outside the federal courthouse where former Chicago Police Commander Jon Burge was attending a hearing on charges he obstructed justice and committed perjury for lying while under oath during a 2003 civil trial about decades-old Chicago police torture allegations October 27, 2008 in Chicago, Illinois. Burge cannot be charged for the torture of suspects because the federal statute of limitations for the crime has expired. (Photo by Scott Olson/Getty Images)

It was one of Chicago?s ugliest chapters, and now it may be your eighth-grader?s homework.

The history of Jon Burge?s ?Midnight Crew? and the near two decades of police torture has been integrated into Chicago Public School?s curriculum.

The curriculum was developed by social science specialists who worked for months with African-American community leaders, civil rights advocates, law enforcement, academic researchers and the Chicago Teachers Union, according to the Chicago Tribune.

That isn?t enough for some parents, who argued Wednesday night that it doesn?t belong in the curriculum at all.

People weighed in on both sides of the issue on Twitter.

Teach CPS children proper English, mathematics & behavior. Have a curriculum on being a lawful citizens who obey lawful order by LEO.

I think it would be better to teach this at a higher grade level. Perhaps as seniors about to get out into the world, why 8th grade? Odd

The thin blue line that keeps us from discussing the problem. How can you learn from it if it's squelched?

Do you think this chapter of Chicago?s history should be taught in schools?