Cops tried to give this car a ticket, but left a hilarious note instead 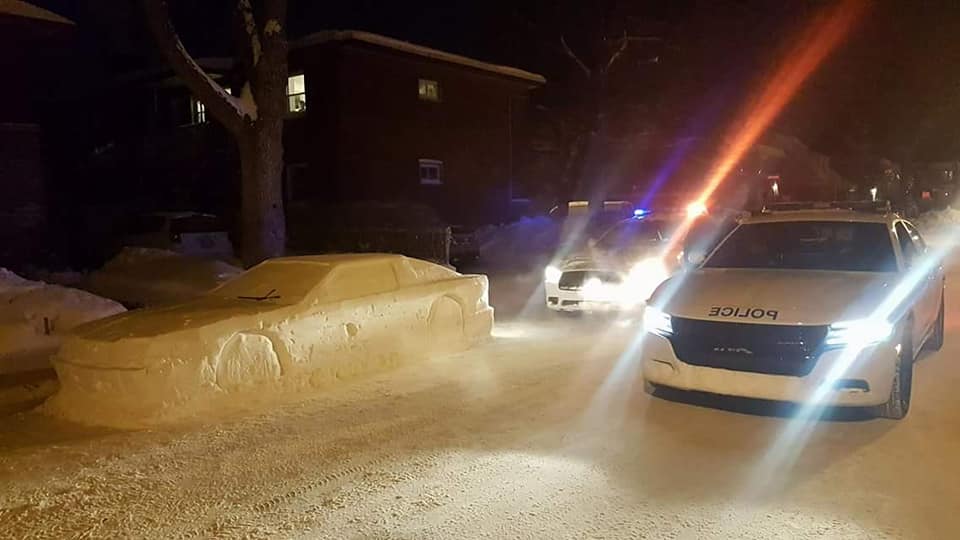 When life gives you snow, you make a fake car out of it in a snow removal zone to play a prank on police officers and snowplow drivers alike. That’s how that saying goes, right?

RELATED: City snow plow and garbage truck drivers almost went on strike until this agreement was made

Simon Laprise had a plan, some snow and a couple hours to spare. 33-year-old Montreal machinist and artist Simon Laprise of L.S.D. Laprise Simon Designs.

A resident of the borough Ahuntsic-Cartierville, Laprise spent his Sunday afternoon molding the recently fallen snow into a DeLorean DMC-12, as made famous by the movie Back to the Future.

Laprise’s finishing touch was masterfully placing a reject windshield wiper on the car’s faux windshield as if it were the only part of the car left exposed. Laprise found the lone wiper blade across the street while sculpting his creation. The solid snow jalopy took around 4 hours to create from start to finish.

The police drove by to check the snow removal zones around 1 Monday morning when they came across the snowy vehicle. A delightful picture of the lone police officer, staring skeptically at the car parked in a snow removal zone, ticket book in hand, wen viral just a few moments later.

Amused by the false DeLorean, the officers left Laprise’s car with a ticket under its single wiper, reading, “You made our night!! Hahahahaha :)”.

RELATED: Here’s the real reason why the new Apple store couldn’t handle all of that snow

All good things must come to an end, the car was demolished by snow removal crews later on Monday morning, according to Global News.

Five others have been molded in Laprise’s car-sculpting past, and it the artist claims that this one won’t be his last.

“I intend to continue doing so,” Laprise said. “It’s fun, it’s free and [the snow] keeps its form.”