During an “unofficial visit” to the White House, the Cubs brought a whole lot of Chi Town to D.C. 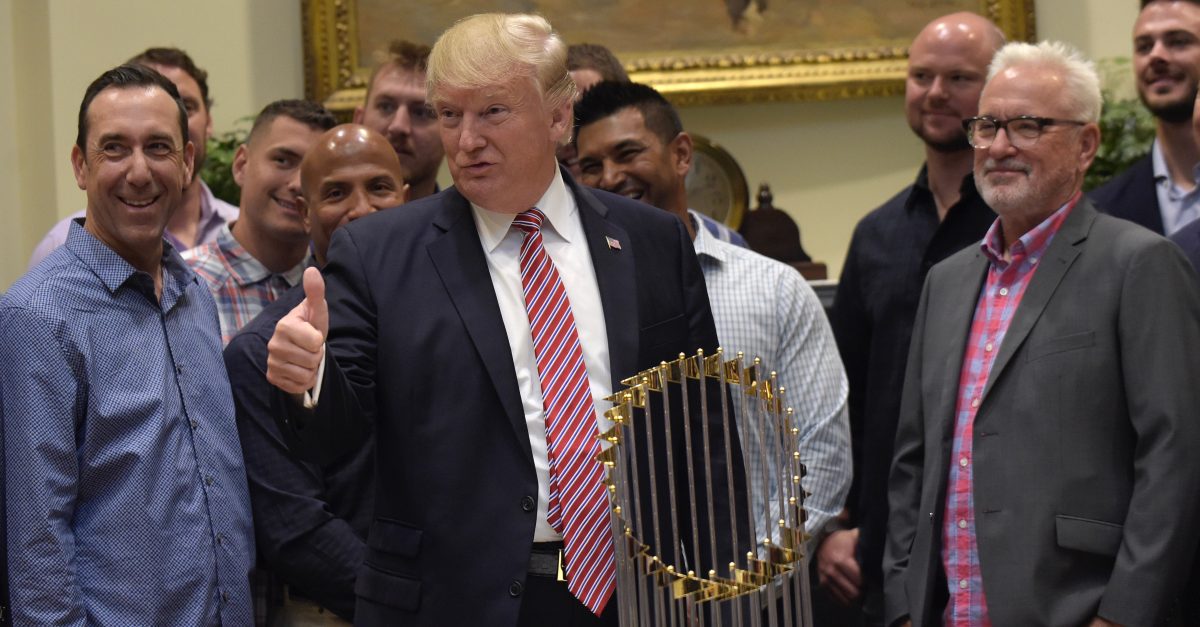 The Chicago Cubs are continuing their World Series Championship celebration.

While in Washington D.C. to play the Washington Nationals, members of the Cubs’ team and organization returned to the White House, this time to meet President Trump.

Joe Maddon, Anthony Rizzo and Kris Bryant were a few of the members of the team who returned to the White House for a second time.

Per the organization’s own words, this trip was unofficial, as the team had already visited the White House in January, days before, ahem, White Sox fan President Obama left office.

It was my great honor to welcome the 2016 World Series Champion Chicago @Cubs ⚾️ to the @WhiteHouse this afternoon. Congratulations! pic.twitter.com/ZZl3GrFFU9

Before the visit,  both Joe Maddon and Anthony Rizzo shared similar statements that the visit had nothing to do with politics and was instead out of  respect for the United States and the White House itself.

?To go [Wednesday] is out of respect to the Ricketts family and to the office and the building itself,? Maddon said before Wednesday’s visit. ?Listen, I like the United States a lot. I like living here a lot. I like everything that it represents a lot. When you get a chance as a citizen to get to go to the White House, you go.

Maddon continued with a message on tolerance and respect:

?And whether you like that person that?s running the country or not, out of respect to the office itself, you go. I don?t agree with all the other banter that?s going on right now because I have a different perspective. I would much prefer living here than some of the other places that adopt different methods of government. I think sometimes that gets confused when people want to take a stand [without] realizing actually what we have here, which is a lot better than most everyplace else.?

Anthony Rizzo had similar comments on the visit:

?I?m going because it?s the United States of America, and I?d rather not (be) anywhere else but this country. There?s no political ties. It?s the White House.?

‪#CubsTrophyTour at the White House, round two. 🏆‬

RELATED: Some of our favorite Chicago Cubs funny moments and pranks