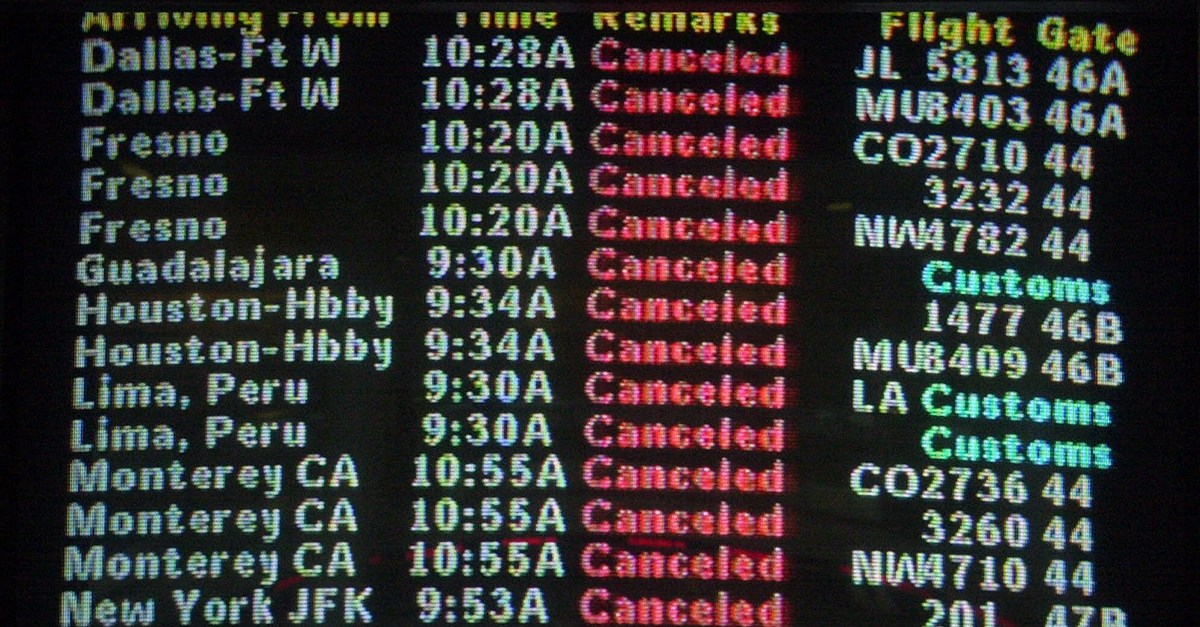 AP Photo/Nick Ut
A sreen at the American Airlines terminal at Los Angeles Internatinal Airport shows that all flights have been canceled as the airport is shutdown, Tuesday, Sept. 11, 2001. In one of the most horrifying attacks ever against the United States, terrorists crashed two airliners into the World Trade Center in a deadly series of blows that brought down the twin 110-story towers. A plane also slammed into the Pentagon as the government itself came under attack. (AP Photo/Nick Ut)

As storms swept the city, many Chicagoans were left stranded at airports late Thursday and early Friday morning, with numerous flight delays as a result of the extreme weather.

RELATED: Chicago weatherman can’t help but point out all the things people think they “see” in weather coverage

Both Midway and O’Hare airports experienced several backups because of the storms, ultimately resulting in hundreds of cancelations Thursday afternoon, according to NBC.

At one point, the weather was so bleak, both airports were forced to put a ground stop in effect to prevent planes from coming in and landing during the storms.

More flights were canceled at O’Hare, but both airports struggled to get passengers to their destination, and, by 6:00 a.m. Friday, more than 140 flights at O’Hare Airport, along with another 19 at Midway, were called off.

Some passengers stood in line for hours, helplessly.

One passenger, Brent Rolland, told NBC he watched his flight get canceled twice.

Southwest Airlines issued a statement about the numerous delays and displacements, reporting the safety concerns of passengers were too great to risk putting them on a plane during the storms.

The extreme weather conditions left passengers stranded overnight in both airports as they waited in lines and slept on cots, waiting out the dangerous storms passing through.

Ending the first night of the city’s annual music festival Lollapalooza early, the weather looks clearer for the weekend, and day two events are running according to schedule.