Since Friday evening, two men were shot to death and at least 29 other people have been wounded in shootings across Chicago – marking an ominously tragic start to the first weekend in the autumn season. After the latest death, 472 people have been shot dead in the city since the start of the year according to data by the Chicago-Sun Times.

Friday marked the end of a turbulent summer season that left behind 184 who died from city gun violence from June 21st. The city has recorded at least 507 homicides in 2017.

In the latest gun violence, seven men were wounded in separate shootings across the city in the early hours of Sunday, in a span of four hours. At 4:39 a.m., a 29-year-old man was shot in the abdomen in the 6800 block of North Sheridan in the Rogers Park neighborhood on the North Side, said police. He was later taken in serious condition to St. Francis Hospital in Evanston.

At 4.02 a.m. a 24-year-old man was standing outside when someone in a dark-colored car opened fire in the
3600 block of East 99th Street in the East Side neighborhood on the Far South Side, said police. He was shot in the right hip and right arm. He was then taken to Christ Medical Center in Oak Lawn, where he was deemed in critical condition.

At about 3:05 a.m. in the Douglas neighborhood on the Southside, a 23-year-old man was shot inside of a fast food restaurant. He was inside the restaurant in the 3400 block of South King when another male entered and opened fire, said police. The man was shot in the right leg and taken to Northwestern Memorial Hospital, where his condition was later stabilized.

A 20-year-old man was standing on the sidewalk in the 2100 block of North Kilbourn in the Hermosa neighborhood when he was shot in the left leg at 2:34 a.m. on the Northwest side. According to police, he was taken to Illinois Masonic Medical Center, where his condition was stabilized.

RELATED: Chicago still leads the nation in homicides, but here’s some much-needed context behind the numbers

Before 1 a.m. someone in a black SUV fired shots in the 6600 block of South Maryland in the South Side Woodlawn neighborhood, hitting a 36-year-old man who was standing on the sidewalk, said police. The man had gunshot wounds to the right leg and was later taken to Northwestern Memorial Hospital, where his condition was stabilized.

At 12.47 a.m. a 22-year-old man was shot in the back while standing on the sidewalk. In the 2600 block of West Wilcox on the Near West Side, police said he later showed up at Mount Sinai Hospital, where his condition was stabilized.

At 12:38 a.m. a 26-year-old man was shot while standing on the sidewalk in the Bridgeport neighborhood on the South Side. As he stood on the 1600 block of West 36th Street, someone in a black van fired shots, striking him in the groin area. According to police, his condition was stabilized at Mount Sinai Hospital.

A total of at least 22 other people have been wounded in Chicago shootings since 7:30 p.m. Friday. In the previous weekend, 11 people were killed and 29 others wounded in citywide attacks between Friday evening and Monday morning. 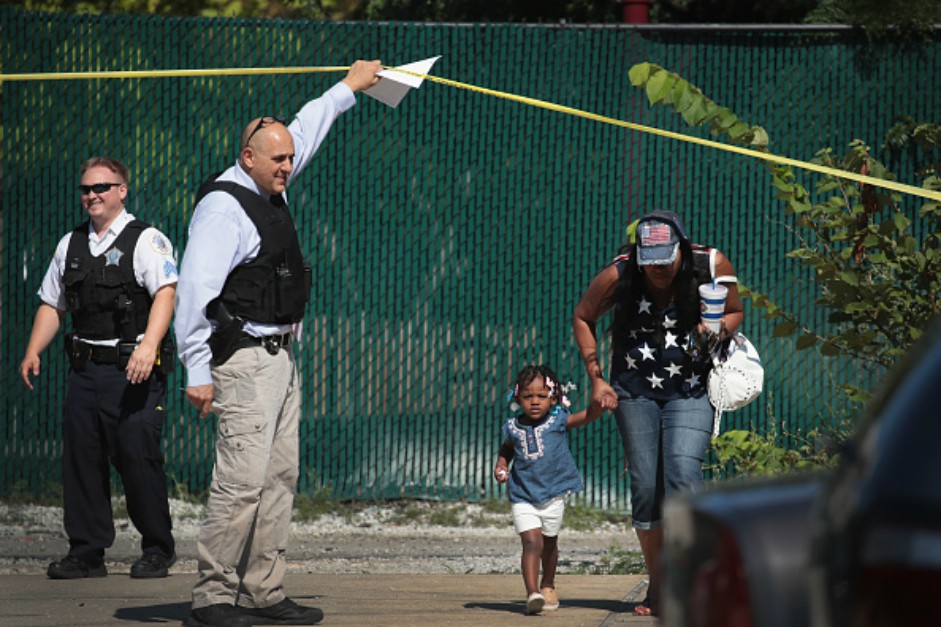