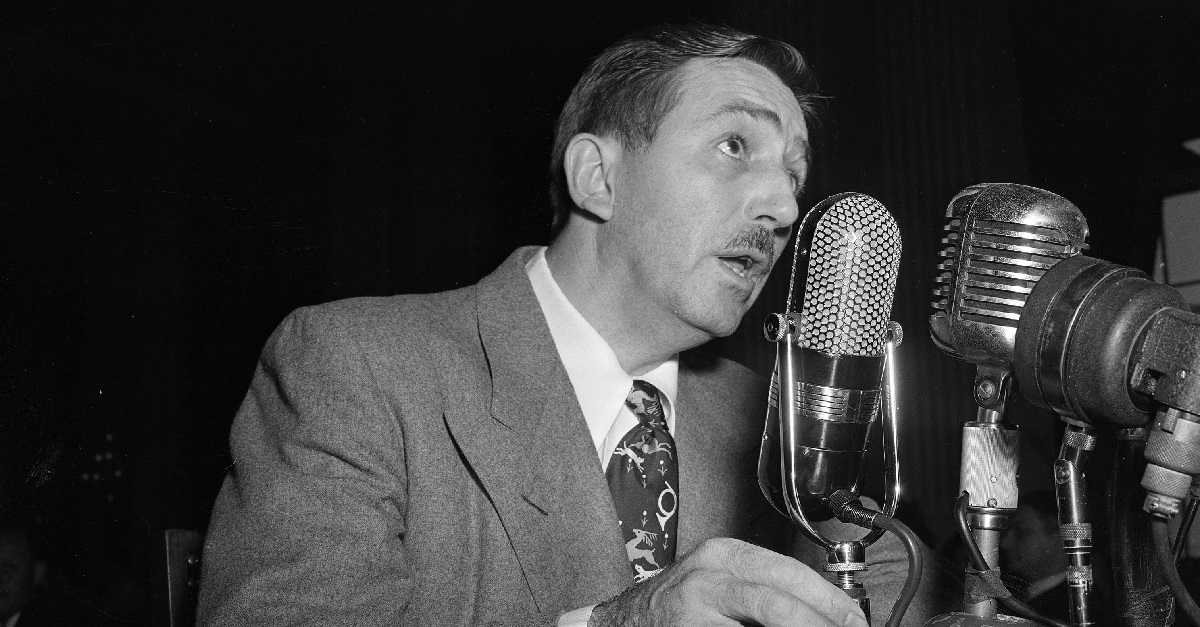 AP Photo
At microphone, movie cartoonist Walt Disney replies to questions of the House Un-American Activities Committee during a hearing of the Communist probe in Washington, D.C., Oct. 24, 1947. Disney told the group that a Hollywood Union Leader once said he could use the National Labor Relations Board "As it suited his purpose." (AP Photo)

While Disney might be more associated with their Hollywood studio or Florida themepark, the company’s founder actually has a stronger Chicago connection that you may not know about.

Walt Disney was born December 5th, 1901 in the Hermosa neighborhood on the North West side, at 1249 N Tripp Avenue. Shortly after his birth, his family moved to Missouri where he spent most of his childhood. But after his father got a new job opportunity, the family moved back to Chicago.

Disney attended McKinley High School at 2040 W Adams (now closed) where he studied art and photography. He also took night classes at the Chicago Academy of Fine Arts (aka, the Art Institute of Chicago). It was around this time that “Walt began to love, and appreciate nature and wildlife, and family and community, which were a large part of agrarian living,” according to Just Disney.

After joining the Red Cross and moving to France during World War I, Disney never really came back to Chicago. But because the city was so integral to his formative years, the city now throws him a birthday celebration at his childhood home.

ABC7 was there to capture footage of the celebration which had neighbors and fans coming out to sing ‘Happy Birthday’ on a particularly cold December evening.

Disney’s home is not a city landmark just yet, but the newest owners are working to restore the building to reflect the 1901 character. According to their website:

Over the last century, the home has changed hands several times and has been added to and altered significantly. These ?renovations? have almost completely covered up the authentic details of the house. We have already lost too many buildings that were an incredibly important part of Walt Disney?s history. And that is why we have purchased this house and will restore it to its original state, honoring and preserving the home for generations to come.

Our project is about more than just a restoration. It is also an opportunity to research this period of the Disney family history which has sparked a larger vision for the home beyond the restoration. Each day, we gain new insights into how and why Walt and Roy became the men they were. We are learning how their childhood, family and parents impacted their lives and laid a foundation that nurtured collaboration, creativity, and innovation.

With our team of project advisors, we are formalizing strategies on how we can empower today?s families to nurture and raise the creative thinkers of tomorrow. Our dream is that The Walt Disney Birthplace becomes a portal to new approaches in early childhood development and helps to inspire future Walts and Roys.

RELATED: ?David Letterman? and ?Magnum, P.I.? perform a metal version of a song from ?Frozen?

Anyone looking to learn more about the Walt Disney Restoration Project can contact them here, as well as contribute a donation to the organization.