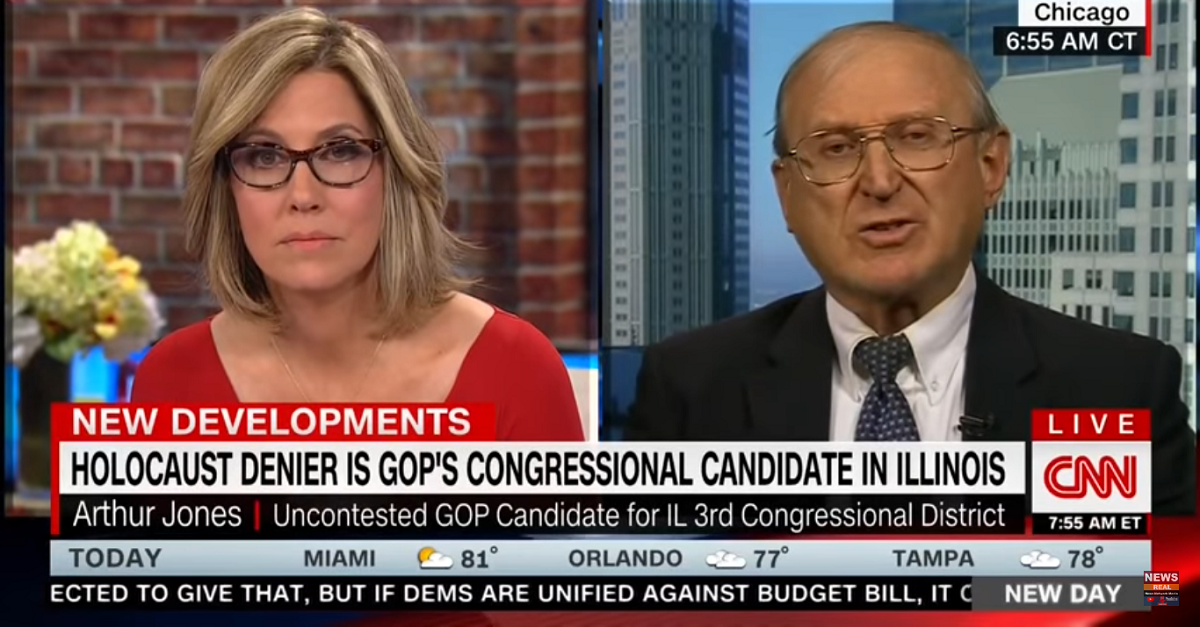 Arthur Jones is running on the Republican ticket for the third congressional district which includes parts of the South Side of Chicago and some West and Southwest suburbs.

RELATED: Why is this teacher handing out Hitler-themed homework to her kids?

In a recent interview on CNN, Alisyn Camerota did not hold back on making it clear that Jones’s perspective is not only skewed and delusional, but dangerous.

“Your website is filled with the most vile, rancid rhetoric I think I’ve ever read,” said Camerota.

“I disagree with you,” Jones responded. “It’s not vile and rancid, it’s the truth. There’s nothing on that website that’s not true. I personally put that stuff on there. I personally picked out the articles on there because they’re true.”

Despite what is posted on his website or what he’s said at rallies (which CNN shows video of) Jones rejects the Nazi label. “The only organization I belong to is my own organization. And that’s the America First Committee.”

“I call myself an American patriot and statesman,” he added.

He double-downed on one of his favorite lines that the Holocaust is an extortion racket, which he had previously mentioned in an interview with the Sun-Times.

Although he is running on the Republican ticket, Jones repeatedly disapproves of “the two-party, Jew-party, queer-party system.”

Watch the full, almost unbelievable interview, here (it should go without saying, but be aware that there is harsh and hateful language in the interview):

While the district has been Democrat for some time now, it’s still worrisome that someone with these views could rise so high within the Republican Party, and one wonders why they didn’t bother getting someone else on the ballot.

Although at this point, it wouldn’t be surprising to see Jones offered a spot in the Trump Administration.