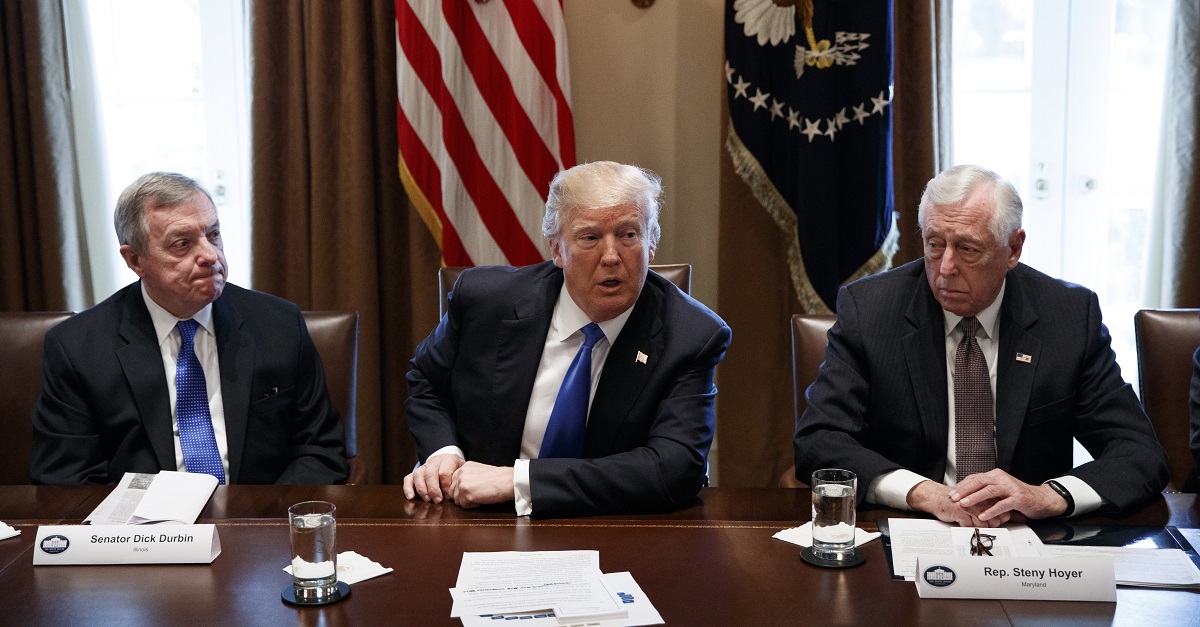 “Why are we having all these people from shithole countries come here?”

Those are the words spoken by the President yesterday at a meeting with lawmakers to discuss protections for immigrants from Haiti, El Salvador, and various African countries as reported by the Washington Post.

RELATED: If Democrats are worried about Trump abusing his power, why are they giving him more of it?

It didn’t stop there. According to those in the meeting, he said: “Why do we need more Haitians? Take them out.”

In a video posted by MSNBC this morning, U.S. Senator Dick Durbin has called Trump’s comments about immigration are “hate-filled,” “vile” and “racist.” “You’ve seen the comments in the press. I have not seen one of them that is inaccurate.”

BREAKING: Democrat Sen. Durbin, who was in meeting with Pres. Trump: "He said these hate-filled things." https://t.co/yUHQuZIOCm pic.twitter.com/s9fMhtcguR

U.S. Senator Tammy Duckworth took to Twitter to express her own outrage.

Donald Trump’s ability to degrade the office of the Presidency never ceases to shock me. Disgraceful. What makes this country strong is the diversity of its people. Nothing can change that, no matter what the President says. https://t.co/N5iXJ8V8mM

Other Illinois Democrats were quick to condemn the comments as compiled by the Chicago Tribune.

“When you thought Donald Trump could not get any more racist, he digs down to an even deeper low,” said Democratic U.S. Rep. Jan Schakowsky of Evanston. “These vile comments are unacceptable and unbecoming of the presidency. It is time for my Republican colleagues to say so. Enough is enough. Silence is complicity.”

“We always knew that President Trump doesn’t like people from certain countries or people or certain colors,” said Luis Gutierrez, the U.S. Representative from Chicago who is stepping down from his position.

“We can now we say with 100 percent confidence that the president is a racist who does not share the values enshrined in our Constitution or Declaration of Independence,” he added.

Rep. Raja Krishnamoorthi of Schaumburg said that “In a time when we need to come together as a country, these comments drive people further apart.”

Members of the media have condemned Trump for his comments as well, in particular Don Lemon and Anderson Cooper, both on CNN.

Lemon opened his show saying, “The president of the United States is racist. A lot of us already knew that.”

“For the President to believe that Haitians have not contributed extraordinary things to American society, that is ignorant,” said Cooper. “For him to claim that all the countries of Africa are “shitholes” is woefully ignorant.”

RELATED: CNN gave Kellyanne Conway a reminder after she claimed “nobody” at White House talks about Hillary Clinton

Naturally, Trump took to Twitter to claim this all as fake news.

Never said anything derogatory about Haitians other than Haiti is, obviously, a very poor and troubled country. Never said “take them out.” Made up by Dems. I have a wonderful relationship with Haitians. Probably should record future meetings – unfortunately, no trust!