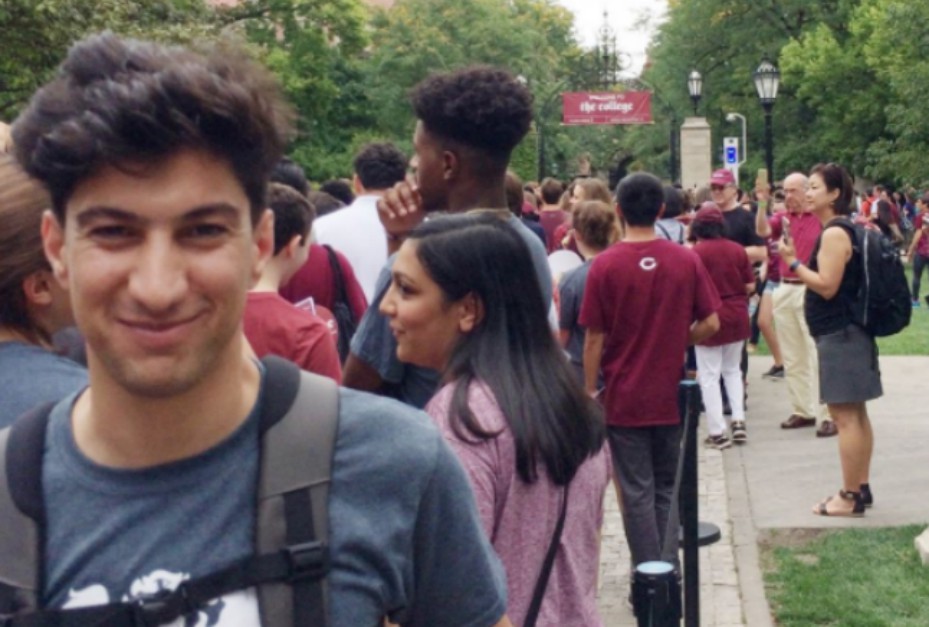 Computer science student Hazim Avdal at the University of Chicago sat down with David Letterman to discuss how he left Iraq after the Islamic State targeted his hometown and how he received support from George and Amal Clooney to continue his studies in Chicago.

According to a Chicago Tribune report, Avdal’s appearance on “My Next Guest Needs No Introduction” was apart of a interview Letterman conducted with George Clooney regarding his career, marriage, twins and their sponsorship of Avdal who moved to Chicago in September.

RELATED: Washington says the war in Iraq is ending ? again ? but it?s probably not

?I?m hoping that through this Letterman show that (my classmates and friends) will be more aware of the things that happened back in Iraq,? Avdal told the Tribune.

Avdal who is 23-years-old, grew up part of the Yazidi religious minority in the Sinjar region of northern Iraq. Avdal graduated high school in 2013 and was later accepted to the University of Mosul but was unable to begin his studies due to al-Qaeda violence against Yazidis made Mosul unsafe. The Islamic state in 2014 or ISIS began the Yazidi genocide.

Avdal shared with the Tribune that he was working six hours from his hometown when the attacks started, saying his family escaped minutes before ISIS arrived. They were able to go to ta refugee camp in Turkey – his mother now lives in Germany while his their relatives are still in Iraq. Avdal’s father died when he was just a young boy.

Avdal began to work for Yazda – an organization that supports the Yazidi community in the aftermath of the genocide. He is a self-taught programmer who designed and programed database management software that helped the organization manage its clients – hundreds of Yazidi women rescued from sexual harassment.

Through that organization, Avdal met Amal Clooney – an international human-rights lawyer who represents Nadia Murad, a Yazidi woman who survived enslavement. Adval said he met Clooney at a ceremony for Murad when she was appointed a goodwill ambassador for the United Nations in September in 2016.

?I?ve had the privilege of representing a number of Yazidis who have been the victims of genocide perpetrated by ISIS over the last couple of years; that?s how I met Hazim,? Amal Clooney told Letterman on his show. ?And when I met him, I remember being so struck by his courage but also just this amazing spirit and how he spoke about, even after everything he lost, he spoke about a desire for justice, not revenge.?

Matthew Barber, a University of Chicago doctoral student, also met Avdal. Barber’s focus was on Islamic thought and Syrian and Iraqi history. Barber was also the former executive director for Yazda in Iraq, and when he met with Avdal, he talked up the University of Chicago while they worked together for a year. All the while, Barber worked behind closed doors with George Clooney to try to get Avdal into the school.

?I was really impressed with his character and his work ethic when I was there, but also his intelligence,? Barber told the Tribune. ?Iraq has a standardized high school examination that?s given to all graduating seniors from high school. ? The year that Hazim graduated from high school, he was the seventh-highest-scoring student in the whole country of Iraq.?

RELATED: George Clooney reveals the unexpected guests who were there when he met his wife Amal

In May 2017 during a visit to the admissions office, Avdal found out he was accepted to the University of Chicago. Barber said to the Tribune Avdal buried his face in his hands and couldn?t speak for several minutes.

Barber along with one of George Clooney’s cousins helped move Avdal into his dorm in Septemebr before Avdal started clases. And on breaks and holidays, Avdal says at Clooney?s home near the Oscar winner?s parents in their hometown of Augusta, Ky.