It’s not just you: Chicago just tied a snowfall record 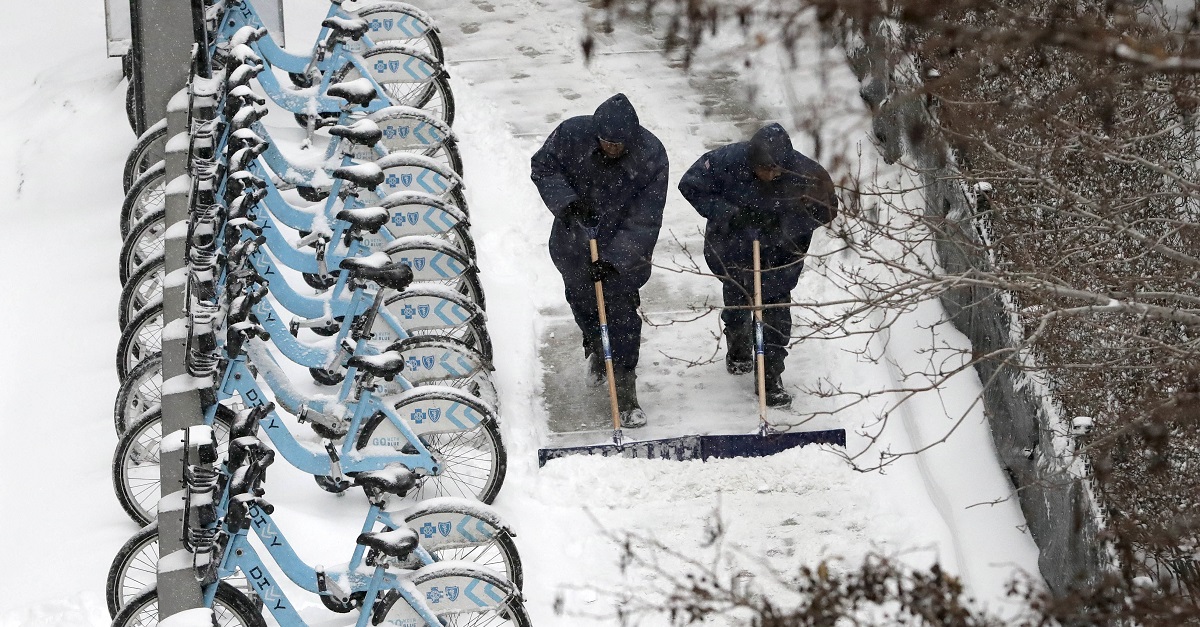 AP Photo/Charles Rex Arbogast
Workers shovel a sidewalk as a winter storm makes its way through several Midwest states Friday, Feb. 9, 2018, in Chicago. The upper Midwest is preparing for a wintry blast as a winter storm is expected across the region, with forecasters saying up to a foot of snow is expected in some areas. (AP Photo/Charles Rex Arbogast)

It’s not just in your head. The snow accumulation has been extraordinary lately and a record has just been matched.

Measurable snow fell every day from February 3rd to the 11th, tying the previous record of nine consecutive days with snowfall.

The two previous times this has happened was from January 29th to February 6th, 1902 and more recently in 1999 from January 6th to January 14th, according to WGN News.

Here are the accumulation amounts from O’Hare over the nine days:

National Weather Service climate data reports that 28.2″ of snow has fallen since December 1st, 2017. The normal value is 22.9″ and through this time last year, only 18.3″ of snow was recorded.

While the city was prepared for the snow, shutting down Chicago Public Schools and county and federal departments on Friday, it has still caused many headaches around the area.

Primarily, over 900 flights were cancelled last Friday at both O’Hare and Midway airports. And even though the snow mostly stopped by Sunday night, Southwest was forced to cancel all of their flights when they ran out of deicer.

The city can finally take in a reprieve from the snow although some rain could be on the way beginning Wednesday evening and into Thursday. Temperatures are even gonna hit the 40s.

After 9 days in a row, we can finally say there will be no snowfall today! Chilly start though with temps at or below 0°, so bundle accordingly. Quiet til later Wed when fog potential arrives into Thu a.m. Chance of rain Wed & Wed Night then chance of snow Thu night. #ilwx #inwx pic.twitter.com/HcM73cl4CZ

RELATED: City snow plow and garbage truck drivers almost went on strike until this agreement was made

So this hasn’t quite been the tropical winter predicted by meteorologists back in October. But at least we finally get a mesmerizing gif out of all of this.

One final look back on the frequent snowfall period of February 3-11. This is a radar loop of those nine days, all of them with accumulating snow in Chicago. For a full recap including maps, numbers, photos, and more see: https://t.co/G44GkMoRCN #ilwx #inwx pic.twitter.com/vpM3CnYn3c