Kid writes letter to teacher about “lying” about Christopher Columbus 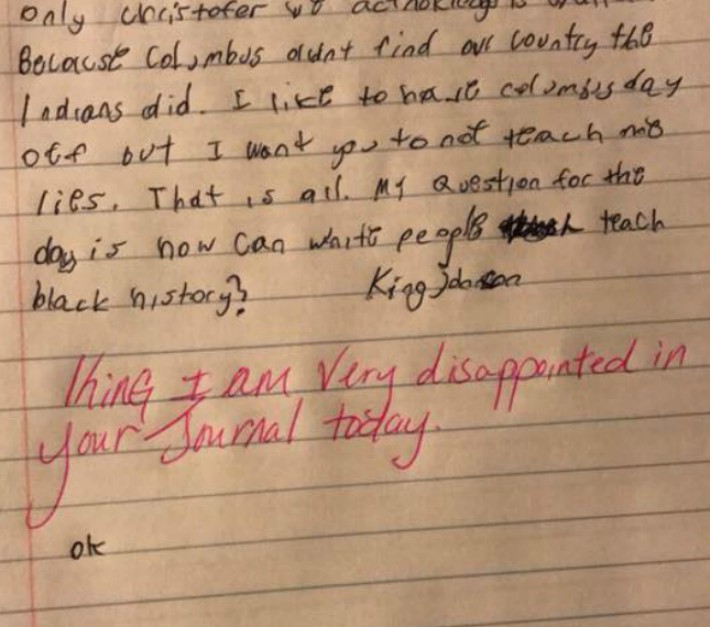 After a student set his teacher straight in a journal entry response regarding Christopher Columbus, his words have gone viral.

According to the HuffPost, King Johnson, an 8-year-old, wrote the journal entry after talking to Robin Johnson, his mother about the true meaning of Columbus Day, King’s mom told the news outlet.

In the letter, King calls out his teacher after finding Christopher Columbus discovered America.

“Today was not a good learning day. Blah, blah, blah,” he wrote. “I only wanted to hear you not talking. You said something wrong and I can’t listen when I hear lies.”

The wise beyond his years 8-year-old goes on to remind his teacher about Native Americans while dropping an appropriate Jay-Z lyric.

“My mom said that the only Christofer we acknowledge is Wallace. Because Columbus didn’t find our country, the Indians did. I like to have Columbus Day off, but I want you to not teach me lies. That is all.”

King’s teacher said she was “very disappointed” in response to his entry, he simply replied, “OK.” according to the news outlet.

According to the HuffPost, King’s mom said she was “proud of him but not so pleased with the ‘blah blah blah.’”

“I always use every moment as a teaching moment,” she said to Huff Post. “His first day off of school for Columbus Day, I decided to talk to him and his siblings about it because he asked why they didn’t have to attend school.”

King said he wrote the letter as he does not like the “dark side” that comes out of a person when they lie, according to the HuffPost.

“It’s important to tell the truth because the world should be full of trust and love,” he said to the HuffPost.

The journal entry posted via Facebook has been shared over 140,000 times as of Friday, with many people praising King for speaking up against the teacher’s lesson. But many people are curious to know why the teacher did not use the entry as an opportunity for a learning moment.

RELATED: Check out what vandals did to Houston’s Christopher Columbus statue amid the Confederate statue outrage

King’s mom said she was taken aback that her son’s journal went viral, according to the HuffPost. King wants to be a police officer when he grows up so he can save lives and in the interim, he appreciates the compliments.

“It makes me feel a lot more confident in myself,” King said of the comments to HuffPost. “Some things that I may not feel comfortable saying I can now say with more courage and to know that I will be supported. All the compliments gave me a lot more courage.”