Kris Bryant gets ejected from Game 2 of Crosstown Classic 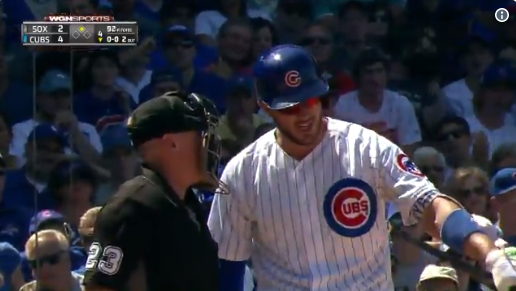 While Kris Bryant is usually calm, cool, and collected, fans saw a different side to the Cubs’ player on Tuesday’s game against the White Sox.

During game 2 of the Crosstown Classic, Bryant not only took a pitch to the knee, but was also tossed from his first career game.

According to WGN, while up to bat after the knee-hit, the ump called a strike, but Kris wasn’t having it.

Check out he moment below:

Here's the terrible call that led Kris Bryant to argue… and get tossed from a game for the time in his career. @WGNNews pic.twitter.com/Yo21eZRgo4

As you can tell, Cubs fans had his back during the moment. So did Twitter, with reporters stating it was a “terrible call” and “you can’t blame him” for being angry.

Bryant gets tossed for first time in career & you can't blame him after strike 3 was 6 inches off the plate (it's the #6 ball in pitchcast). pic.twitter.com/JKtVXI5tZx

The Cubs won the game, making the series 1-1 as they head to Guaranteed Rate Field tonight and tomorrow.