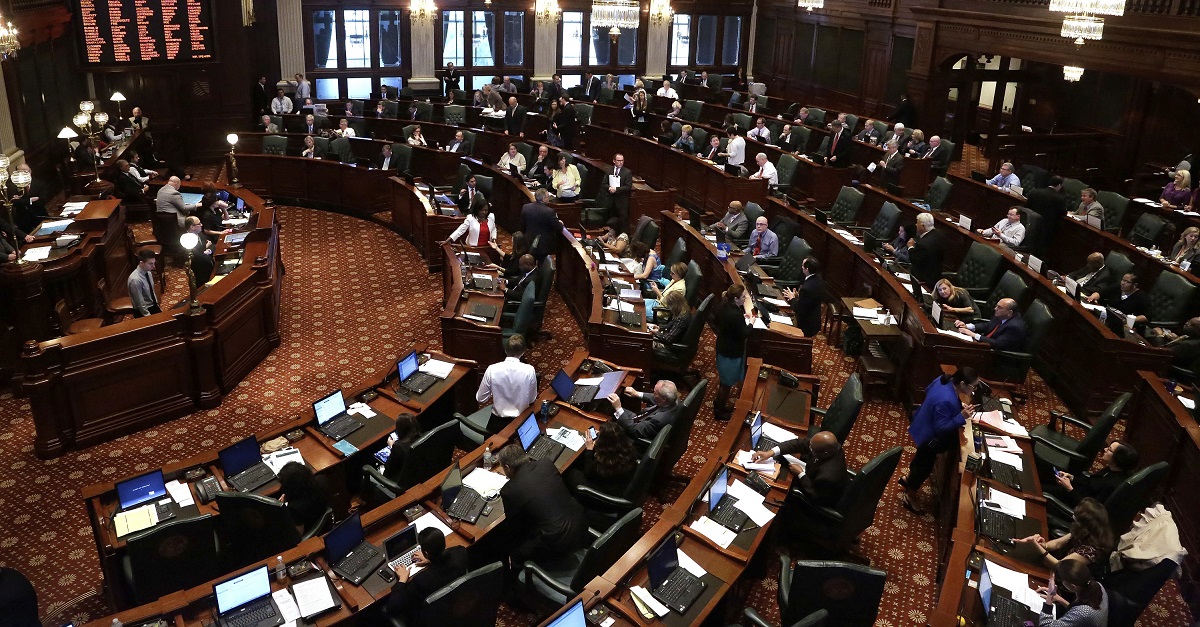 AP Photo/Seth Perlman File
FILE - In this Friday, May 30, 2014 file photo, lawmakers are seen on the House floor during session at the Illinois State Capitol in Springfield Ill. More than two-dozen legislators, about 15 percent of the General Assembly, have either resigned months into the current session or said they won't seek re-election. (AP Photo/Seth Perlman File)

Multiple bills have been or are going to be introduced in the Illinois House and Senate with regards to gun control. A House bill to be introduced Tuesday will honor slain Chicago police officer Paul Bauer, who was shot and killed at the Thompson Center on February 13th.

After hearing scanner traffic describe a suspect, Bauer confronted the a man that matched the description. After a struggle, he fired a gun at the 31-year department veteran and killed him.

If the bill passes, there would be a ban on sales of body armor and high-capacity magazines to anyone who is not a police officer, licensed security guard or member of the military, according to WGN.

The suspect who was charged with the fatal shooting of Bauer was wearing body armor at the time. It is a felony to wear body armor while committing a crime in Illinois.

?I think there?s been a sea of change, not just in Illinois, but across the country,” said Mayor Rahm Emanuel. “We have to make sure we don?t allow this to pass, but take this opportunity to do something significant that?s been pushed for a while.”

Emanuel has been highly vocal lately about gun control, especially as the topic of arming teachers in schools has been debated across the country.

?It is absurd anyway you look at it by President Trump, that the best way to protect our kids is to bring more guns into schools,? Emanuel said. ?I want to make sure our teachers are armed with education and textbooks.?

?I am all for Americans who have legal rights to own firearms only, but you can not convince me that high-capacity magazines are needed in the city,” said Chicago Police Superintendent Eddie Johnson. Johnson will be in Springfield to testify in support of the bill.

“As a legal gun owner, you can’t convince me you need an AR-15 in the streets of Chicago, you just won?t convince me of those things,” Johnson added.

Other bills call for a ban on assault rifles and semi-automatic weapons.

?I don?t see the need why someone has to have an AR-15,? said Senator Ira Silverstein, D?Chicago, who filed the Senate bill. ?We?re not at war, people can protect [themselves] using smaller guns. We have concealed carry.?

Another bill in the House would ban the sale of guns without a serial number, also known as “ghost guns.”

?Without a serial number, it?s untraceable,? said State Representative Marty Moylan, D?Des Plaines, who introduced the bill. ?So, convicted felons, who aren?t supposed to have a gun or other individuals who are able to use the gun in crimes, are able to order one over the Internet.?

Chicago and Illinois already have a perception of being strict on gun laws, but that isn?t necessarily the case. A previous handgun ban was overturned in 2010 and a concealed carry law was passed in 2013.

Likewise, gun owners are not required to register their weapon with the city nor obtain a permit.