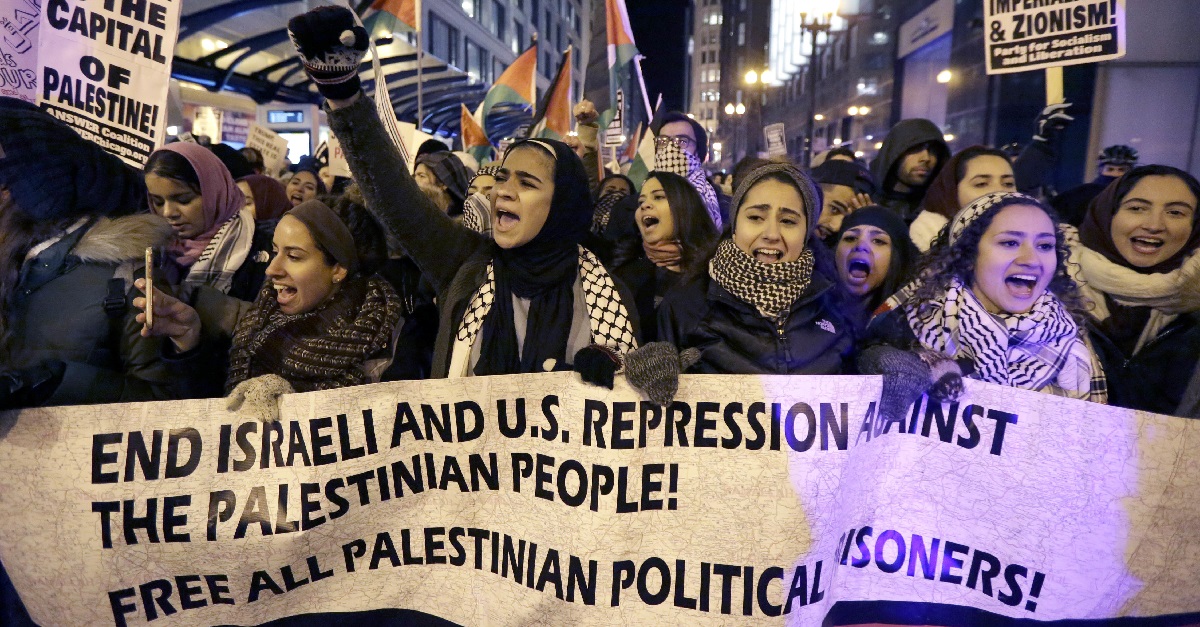 On Wednesday, President Trump announced that he formally recognizes Jerusalem as the capital of Israel and plans to move the US Embassy to there from Tel Aviv. The controversial move has been seen as an attack against Palestinians and a reversal of US foreign policy of nearly seventy years.

In response to the declaration, protestors worldwide have demonstrated their disapproval of the act, including on the streets of Chicago Thursday night.

Coalition for Justice in Palestine member Deanna Othman said in a statement, “This unilateral move is further proof of the fact that Trump and the U.S. are not, and have never been, honest brokers for peace in the Middle East.” Palestinian leaders have called for “Three Days of Rage” in response to Trump’s announcement.

The peaceful Chicago protest wound through the streets in the Loop, with a couple hundred demonstrators marching down Madison to the Israel Embassy which is located at 500 W. Madison St.

Protests have taken place in Jerusalem and other parts of Israel as well. While the Chicago demonstrations were peaceful, there are conflicting reports about the state of violence at those protests.

The New York Times wrote that while three were arrested, “the enormous outburst of violence that had been feared after Mr. Trump’s decision to formally recognize Jerusalem as the capital of Israel did not immediately materialize,” and that “the main Friday Prayer at Al Aqsa Mosque was held without incident, according to the Israeli police, and the crowds that gathered afterward dispersed largely peacefully.”

However, new reports from Al-Jazeera that a “30-year-old Palestinian man was killed by Israeli fire during protests in Gaza on Friday.”

Israel Prime Minister Benjamin Netanyahu thanked Trump for his decision. “We’re profoundly grateful to [President Trump] for his courageous and just decision,” he said. “This decision reflects the president’s commitment to an ancient but enduring truth — to fulfilling his promises and to advancing peace.”

While Trump pulled the trigger on this decision, this isn’t an entirely new idea in US foreign policy. In fact, the United States has been trying to do this for over twenty years.

The Jewish Embassy Act passed through US Congress on November 8th, 1995, with bipartisan agreement tallying 374-37 in the House and 93-5 in the Senate. It was signed into law by Bill Clinton.

But while the Act was passed, neither Clinton, George W. Bush, or Barack Obama followed through with it, fearing that it would only instigate violence and provide no practical path towards peace in the Middle East.

RELATED: Americans are gathering to mark the election anniversary in the loudest way possible

Check out more photos from the protest in Chicago below.