Recent changes in weather means a huge uptick in potholes around Chicago; here’s what you can do 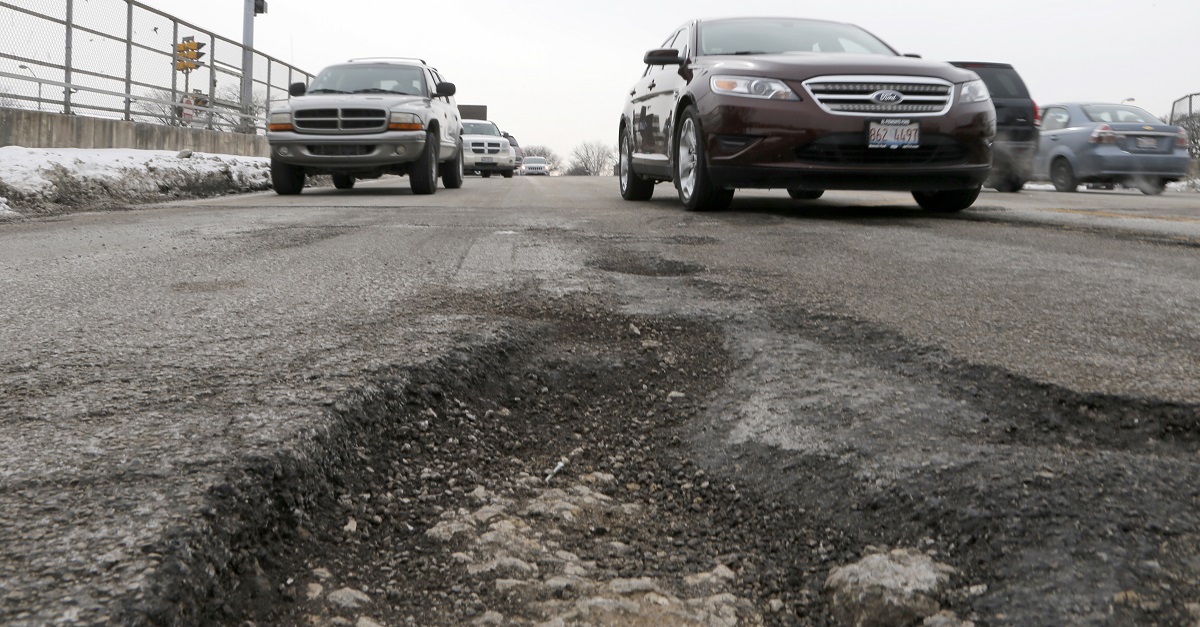 AP Photo/Charles Rex Arbogast
Motorists traveling on Chicago's Austin Ave. dodge potholes as the effects of a harsh winter continue to challenge the city's infrastructure Wednesday, Feb. 12, 2014, in Chicago. The relentless cycle of snow and bitter cold this winter is testing the skeletons of steel and cement on which communities are built. Pipes are bursting in towns not used to such things, and roads are turning into moonscapes of gaping potholes big enough to snap axles of passing vehicles like Popsicle sticks. (AP Photo/Charles Rex Arbogast)

Recent large snowstorm? Check. Post-storm rise in temperatures? Check. Major uptick in the amount of potholes on the roads? You betcha.

One of Chicago drivers’s most notorious foes is back in action and Chicago Department of Transportation crews have been busy trying to alleviate the problem.

RELATED: This woman was sick of the potholes in her town so she decided to fill them with something sweet

According to a department spokesperson, 40,000 potholes have already been filled this year, which is about 25,000 fewer than at this time last year.

“Since the snow has been melting they’re getting deeper and deeper. And I’m just going on a roller coaster ride,? driver Robin Minkins told Fox 32 News.

Potholes form when temperature fluctuations allow water to seep into the pavement then freezes, expands, and melts again. Cracks continue to grow in the pavement and the weight of multiple vehicles driving over the cracks eventually collapse the asphalt, causing a pothole.

According to CDOT, “Chicago has more than 3,800 miles of streets, and potholes can occur on any one of them. Potholes tend to appear most on arterial streets (which carry the most vehicles) and under bridges and viaducts, areas where water often collects.”

If there’s a particular pothole causing you problems, there are multiple ways to report it to the city. You can call 311 and tell them the location, take a picture and email it to them, or use their website to report online.

Typically, potholes are filled within two days of a complaint. Keep in mind that not every crack in the sidewalk is a pothole.

The CDOT website differentiates three different kinds of street problems. “Potholes are typically irregularly shaped holes of varying depths. Sinking pavement adjacent to a manhole or catch basin is usually a cave-in that requires reconstruction by the Department of Water Management. Square or rectangular pavement problems are often failed utility cuts created when contractors dig into the street.”

If you are unsure of what kind of issue is plaguing your street, feel free to call 311 to report any issue. To see the progress, the city also has a pothole tracker of recent filled potholes.

RELATED: This driver was stuck in a huge pothole but never thought this tow truck would make the situation worse

If you’re real lucky, you can get street pothole artist Bachor to come and fill one outside your home.