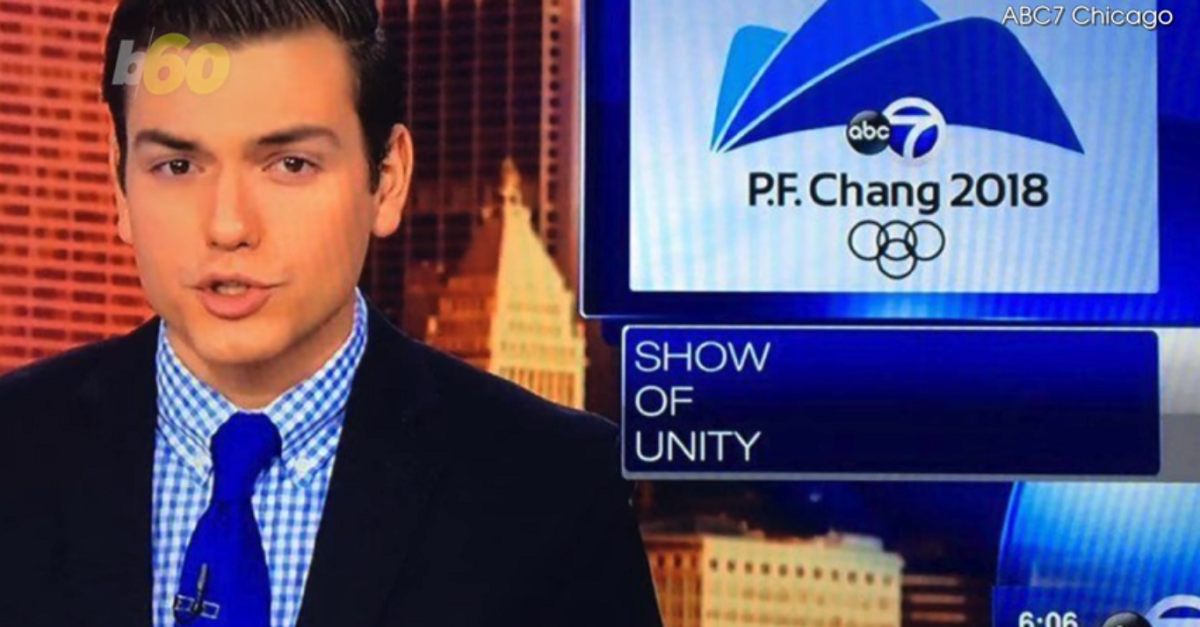 It was only a matter of time that someone was going to goof up the name of the location where the Winter Olympics are being held. But who had their money on it being ABC 7 Chicago?

RELATED: See the move a pair of Olympic figure skaters toned down for being a bit too sexy for viewers to handle

News anchor Mark Rivera was delivering a segment about the Olympics on Saturday when he slipped up the name Pyeongchang with P.F. Chang’s, a Pan-Asian chain restaurant.

According to ABC spokesperson Jayme Nicholas, the mistake was because of a graphics mix-up. Mark Giangreco, ABC sports anchor, had invited viewers to share satirical Olympic events last Friday. The graphic was mistakenly used by Rivera’s team on Saturday.

The four rings that are obviously not the five-ringed Olympic logo do suggest the graphic was never to be used in a serious situation. While this is quite a disappointing mix-up from a local news affiliate, Rivera has apologized. And this wasn’t even the first news controversy to hit the waves this year.

NBC contributor Josh Cooper Romo upset many Koreans when he commented that “every North Korean will tell you that Japan as a cultural and technological and economic example has been so important to their own transformation.”

On the plus side, there is plenty of positive and local news coming out of the Olympics worth paying attention to.

Shani Davis is Chicago-native who’s propelled himself to speedkater stardom. This is his fifth straight winter games and he was the first African-American to win an individual gold medal at the Winter Olympics.

WBEZ has the full run down of Chicago-area athletes competing in the games.