Suspect charged with fatally shooting police officer was wearing body armor at the time, a felony in Illinois 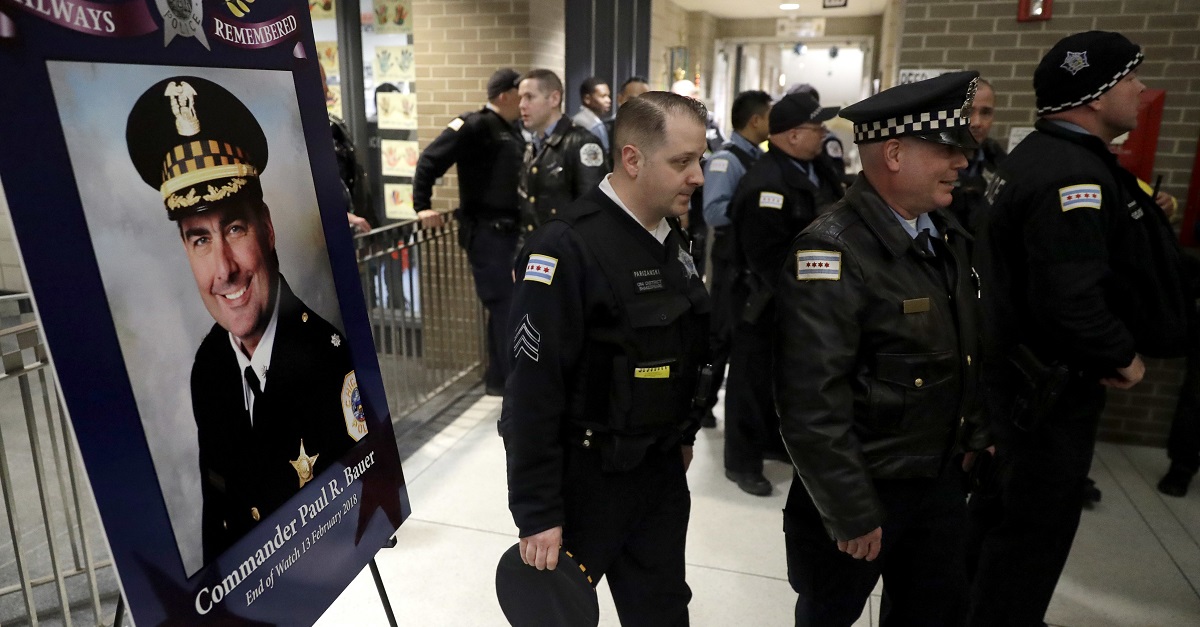 AP Photo/Charles Rex Arbogast
Chicago police officers pass a memorial portrait of Cmdr. Paul Bauer for a candlelight vigil for Bauer outside the Near North District headquarters Wednesday, Feb. 14, 2018, in Chicago. The 53-year-old Bauer, who had been with the department 31 years, was fatally shot as he went to assist other officers who were pursuing the suspect, Shomari Legghette, in downtown Chicago on Tuesday. Legghette is charged with first-degree murder in the shooting of Bauer. (AP Photo/Charles Rex Arbogast)

On Tuesday afternoon, a commander for the Chicago Police Department was fatally shot at the Thompson Center in the Loop.

Commander Paul Bauer chased down a man that tactical officers were previously trying to stop. Bauer confronted the suspect but after a struggle, he fired a gun at the 31-year department veteran and killed him.

RELATED: The Ohio police officers shot and killed while responding to a 911 call have been identified

Officers later apprehended the suspect who is a four-time felon with an arrest record that goes back to 1994. The police now say he was wearing a bulletproof vest at the time of the shooting. In Illinois, it is a felony to wear such a vest while committing a crime.

The Chicago Tribune also notes that it is a felony to wear a vest and illegally possess a firearm. The minimum prison sentence for such a crime is ten years.

The suspect in the murder of Commander Paul Bauer was even arrested for wearing a bulletproof vest and possession of a gun with a defaced serial number while on parole in 2007. He served three years for the crime.

Generally, this type of felony is rare for police to encounter, but it does happen. ?Someone that?s a hardcore killer, or he?s probably going to get engaged in a shootout with rivals,? an anonymous officer said.

RELATED: FBI may have known months in advance that Florida shooting suspect had plans to be a ?professional school shooter?

Bauer will be remembered for his dedicated life to family and community service. His neighbors in the Bridgeport neighborhood spoke highly of him and could always depend on him to help out with everyday tasks, particularly with helping clear sidewalks after the recent snowstorm. He leaves behind a wife and a 13-year-old daughter.

?Let?s not forget the legacy of Commander Paul Bauer. He gave his life for the protection of this city,? said Police Superintendent Eddie Johnson. ?I just ask the citizens of this city to keep the Bauer family in their prayers.?