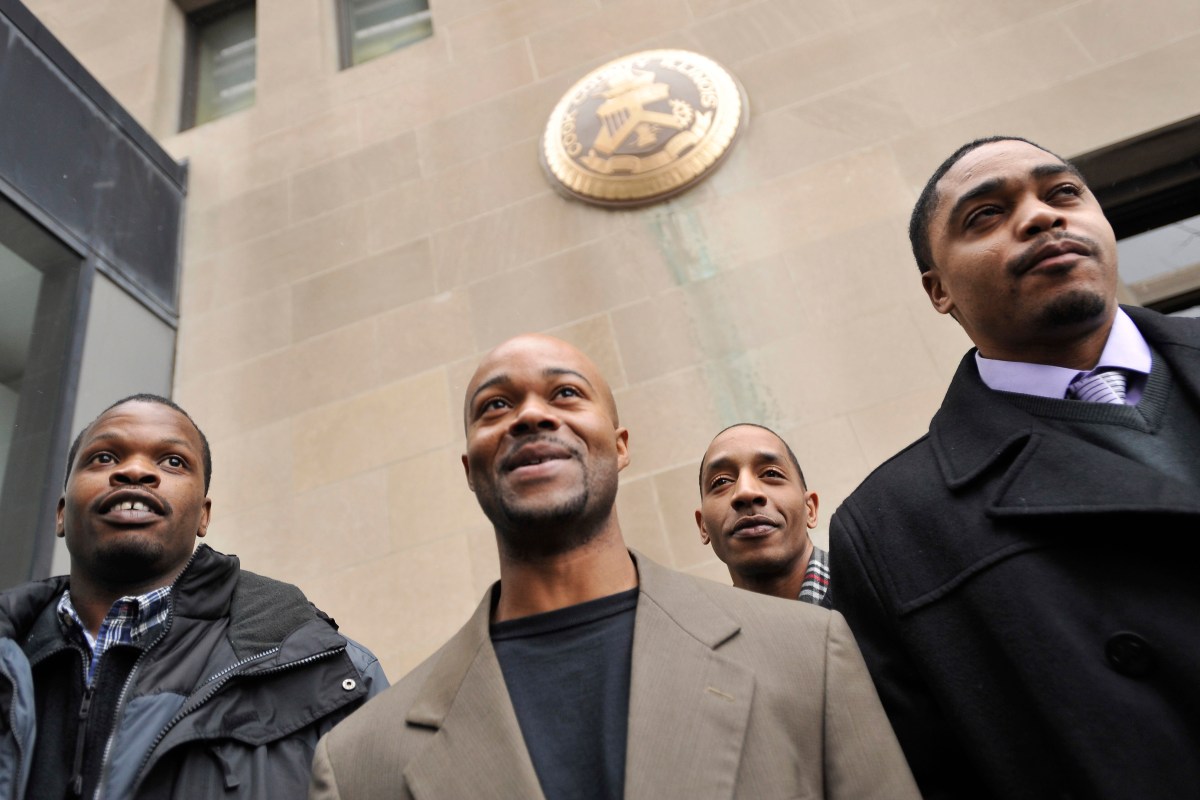 (AP Photo/Paul Beaty, File)
FILE - In this Jan. 17, 2012 file photo, Harold Richardson, left, Vincent Thames, second from left, Terrill Swift, and Michael Saunders, right, pose for a photo after a hearing in Chicago for the four men whose 1994 rape and murder convictions were overturned in November 2011. New DNA evidence linked another person to the crime. The men, known as "the Englewood Four," filed a federal lawsuit Thursday, Nov. 15, 2012, against the city asking for a jury trial. The lawsuit names the city, several Chicago police officers and other public entities. (AP Photo/Paul Beaty, File)

After being wrongfully convicted and spending fifteen years in prison, four are now potentially receiving a nearly $31 million settlement, one of the largest the city has ever had to pay.

RELATED: One corrupt cop was behind these 18 convictions that just got overturned

The men were known as the “Englewood Four” and convicted of the 1994 rape and murder of 30-year-old Nina Glover. New results from DNA recovered from the crime scene have overturned the conviction in 2011.

The four men (Michael Saunders, Vincent Thames, Harold Richardson and Terrill Swift) originally confessed to the crimes but later said they were coerced into the confession according to the Chicago Tribune. All four men were teenagers when they were arrested.

Swift has already reached a $5.6 million settlement with Cook County. He now lives in California and “plans to use the money to fund a career in real estate and secure the future of his two daughters.” There are three other lawsuits against Cook County from the men as well.

While this settlement won’t get the men fifteen years of their lives back, it is Swift’s hope that future cases will be more thoroughly reviewed. However, one member of the police union shot back at the Tribune‘s request for more information:

Martin Preib, a spokesman for the city?s main police union who frequently alleges media bias against officers, replied to a Tribune reporter?s request for comment on the settlement with an email saying, ?What?s your cut??

The four men originally filed suits in 2012. ?We are not filing complaints just for monetary gain,” Swift said at the time. “We want you to make a change in how you interrogate us, speaking in reference to how we were as a youth, how you guys took advantage of us. That?s what we want. We want an apology as well.”

Earlier this year, the city awarded a man $44.7 million after he was shot by a police officer after a night of drinking. Michael LaPorta was shot in the skull by off-duty officer and friend Patrick Kelly. LaPorta?s attorney Antonio Romanucci said ?this verdict is a step towards creating meaningful and permanent institutional reform in law enforcement in the city of Chicago.?

While both of these situations are different, the aims of both settlements are for more police accountability and institutional reform.

RELATED: ?Making a Murderer? fans will be surprised to hear the latest news about Steven Avery

Although approval of legal settlements is typically considered a formality, the City Council’s Finance Committee is meeting today to finalize the plan.