This Chicago artist is making collages out of used dime bags 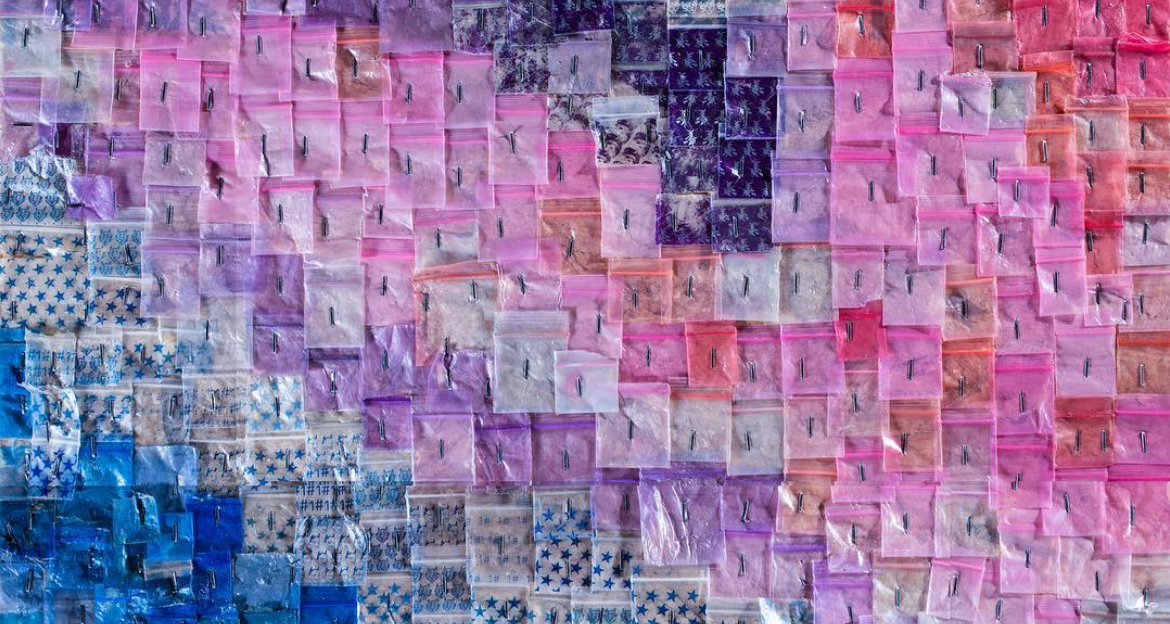 Drugs have inspired some great art throughout the history of mankind. But Chicago artist Ben Kurstin has been working on a drug-addled project in a very unexpected way.

RELATED: The opioid crisis: A toxic marriage of the War on Drugs and easy painkiller prescriptions

Kurstin used to live in the Humboldt Park neighborhood where he would constantly see dime bags on the ground. As DNAInfo reports, his initial curiosity became an obsession that turned into a vast artistic project.

Picking up dozens and sometimes hundreds of bags a day, Kurstin began to clean and organize the bags and started making colorful and beautiful mosaics out of them. He has collected over 8,000 bags.

On Kurstin’s website, you can see the wide variety of bags that he has found and the ways he has turned them into art. The outcome of the project blends a few artistic inspirations.

Pop culture items like the American flag, Richard Nixon, and the Playboy logo are reminiscent of Andy Warhol and Jasper Johns. Some of the more conceptional and colorful pieces bring to mind the abstract expressionism of Mark Rothko.

But it’s not just about making something aesthetically pleasing. “Seeing the sheer number of bags I was finding, and the indifference of the police to that, was really concerning,” Kurstin told DNAInfo. “It became very obvious that the ‘War on Drugs’ is a complete failure. People who are addicted are able to get drugs, and they’re able to get them easily.”

The open-air drug market is particularly bad in Humboldt Park as the Chicago Reader reported a few years ago.

RELATED: A family was dumbfounded when their pet golden retriever dug up a whole lot of hard drugs in the backyard

Kurstin’s work is especially timely based on the growing national conversation centered around the opioid epidemic. He is currently looking to showcase some of his work in local galleries.