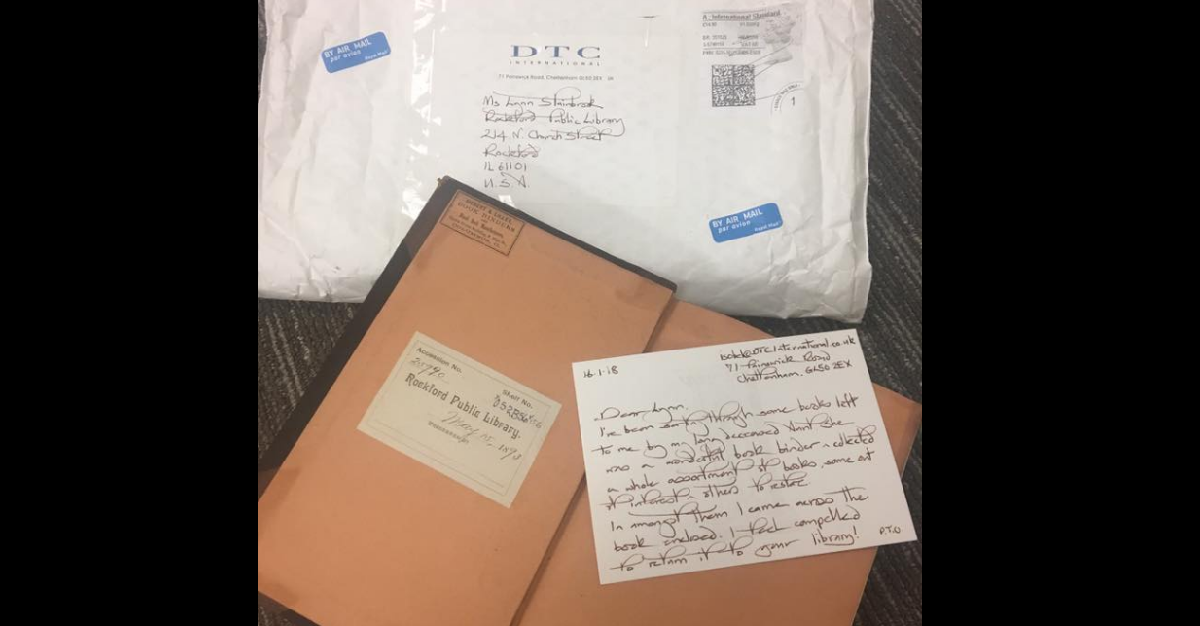 Worried that you may have insurmountable fines from an overdue library book? Well now you have a precedent to get away with not paying the fine.

At least if your book is 124 YEARS past due.

NBC 5 News reported that Rockford Public Library posted pictures of a book returned to the library of a book that somehow made it all the way to Chattenham, England.

While sorting through books from her deceased aunt, Isabella Heaton noticed one book that was checked out on May 15, 1893 from the Rockford Public Library.

“I’ve been sorting through some books left to me by my long deceased Aunt,” she wrote. “She was a wonderful book binder and collected a whole assortment of books, some out of interest, others to restore. In amongst them I came across the book enclosed. I feel compelled to return it to your library!”

The book in question was The Blackwood’s Edinburgh Magazine Jul-Dec 1844 Vol. LVI.

According to their Facebook page, the Rockford Public Library opened in 1872 and was the second public library to be established in Illinois. The library joked that they are forgiving the way long overdue fine.

This is certainly one of the oldest library books to ever be returned but there is some debate over what the longest overdue book is.

According to the Guinness Book of World Records, the largest fine ever paid was $345.14 for a book that was overdue 47 years in Kewanee Public Library in Illinois.

Last year, a book was returned to a library 78 years late with an overdue fine of over $2800. But the library decided to forego cashing in on the fee.

But perhaps the worst offender was by that of our nation’s first president. That’s right, George Washington rented a book that wouldn’t be returned for over 221 years.

Washington checked out two books on October 5th, 1789 from the New York Society Library. They were due back on November 2nd but he never showed up.

At some point before 1792, the ledger that kept track of his overdue fines goes missing. Fast forward to 1934 where the ledger is recovered. There is no evidence that points to Washington having ever returned the books.

In April 2010, Archivist Matthew Haugen discovers the New York Society Library’s long-lost 14-volume collection of the Commons Debates. Volume 12 is still missing. At this point, Washington owes a fine of $300,000. “We’re not actively pursuing the overdue fines,” said head librarian Mark Bartlett at the time. “But we would be very happy if we were able to get the books back.”

RELATED: Obama Library to be built by minority-led firms

Well, they may have been close enough when a month later, Mount Vernon staff, having heard of the missing books and unable to find them Washington’s estate, found a similar copy The Law of Nations (the second book Washington checked out) and purchased it for $12,000 to return to the library.

We express our gratitude for your patience… and for your generosity in erasing the considerable funds that were probably owed by George Washington,” James Rees, executive director of Washington’s Mount Vernon Estate, told library staff. “He did not do his public duty.”