This man couldn’t afford to ride in the bus in Chicago, so he decided to ride ON it 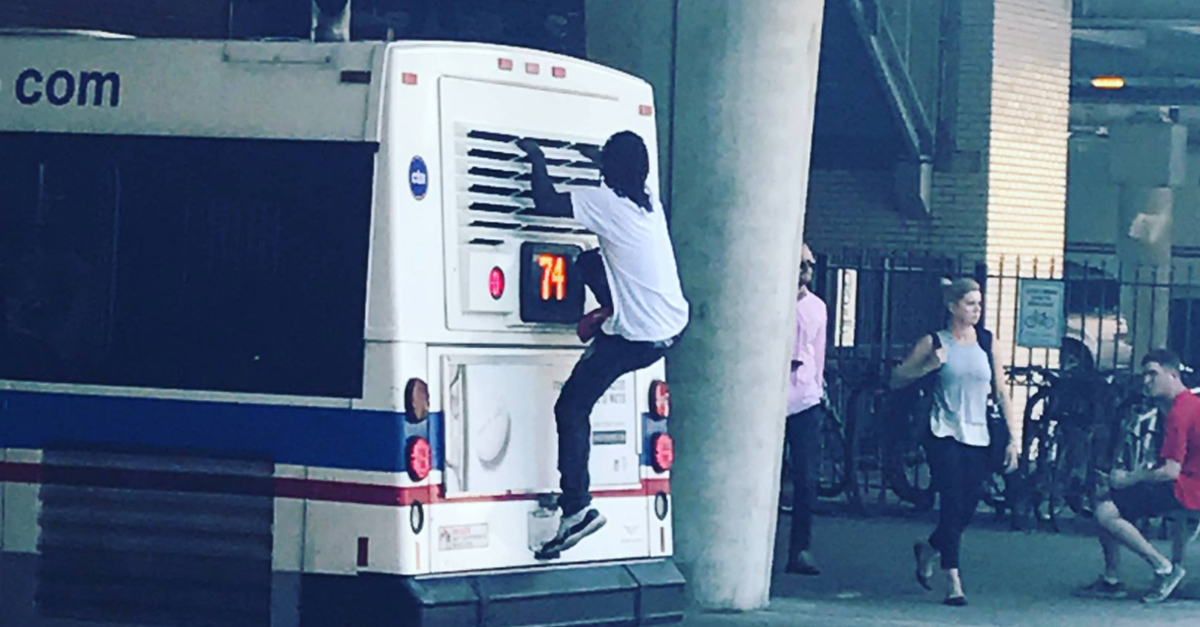 When you can’t afford a ride on the CTA bus from point A to point B, there’s always one other option: you could jump on top of it like this guy did.

Caught on video by Lloyd-Anthony Peters of Rogers Park, the video, which was filmed on Wednesday at the Fullerton station in Lincoln Park, shows how one man caught a ride on top of the bus. Peters had an encounter with the man prior to his journey when he asked him for a cigarette, according to DNAinfo.

RELATED: Chicagoans really love the voice on the CTA

Peters gave the man a cigarette, but then he asked for a tap on Peters’ Ventra card so that he could catch a ride on the bus and, when Peters said he couldn’t because he’s on crutches and wouldn’t be able to get to the card reader, the man simply spoke to him a few moments longer before literally jumping on the bus.

“He just said, ‘F— it’ and literally climbed on top of the bus, lit the cigarette that I gave him and went down the street like a boss,” Peters told DNAinfo.

Being as surprised as everyone else by the sudden and abrupt route the man took, Peters still managed to capture video which he posted to Facebook and Instagram. Since being posted, the video has been watched over 40,000 times and shared hundreds of times, gaining popularity about as quickly as this man made him move.

RELATED: Chicago is losing billions of dollars searching for parking

The man climbed on top of the bus with ease and was even careful to avoid its diesel stack as he perched on the roof to get to his destination without a care in the world.

“In the city of Chicago, I’ve seen a lot of strange things … someone climbing on top of a bus to ride it, that’s a first for me,” Peters said. “That’s definitely a first for me.”