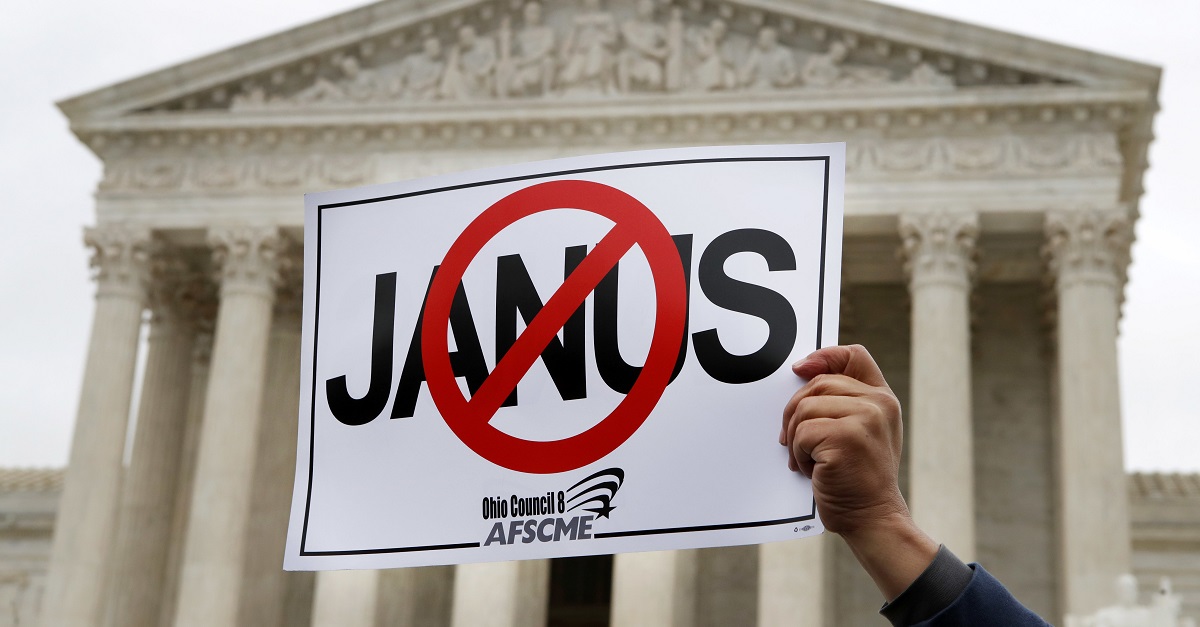 AP Photo/Jacquelyn Martin
Stephen Roberts, with the American Federation of State, County and Municipal Employees (AFSCME), holds up a sign against Mark Janus during a rally outside of the Supreme Court, Monday, Feb. 26, 2018, in Washington. The Supreme Court takes up a challenge in a case that could deal a painful financial blow to organized labor. The court is considering a challenge to an Illinois law that allows unions representing government employees to collect fees from workers who choose not to join. (AP Photo/Jacquelyn Martin)

Various union members marched downtown on Saturday to fight for worker’s rights. The group was protesting a Supreme Court case that could potentially dismantle union protections.

Public arguments in the case of Janus vs. AFSCME begin on Monday. The plaintiff is a State of Illinois employee and says he shouldn’t pay dues to a union he doesn’t agree with, writes WGN.

The Loop rally, which had protesters marching from Daley Plaza to the Thompson Center, was “part of a nationally coordinated effort” against the Supreme Court case, which “threatens to strip Americans of our freedom to come together in strong unions, build power, and have a voice at work, writes the Illinois Education Association (IEA).

The IEA has also argued that this case could have a huge impact on teachers across the state and country. ?Nationally, about 70 percent of teachers belong to a union and here in Illinois that number is even higher. Nearly every preK-12 teacher in Illinois is in a union,? said IEA President Kathi Griffin.

?The IEA alone has 135,000 members in Illinois. That?s why we have such outstanding schools. Our teachers and our education employees have a voice, and we are able to do what?s best for our students,” she added.

Parts of the protest was also sending a message to Illinois Governor Bruce Rauner, as Kathi Griffin explains the court ruling against the unions would be favorable to Rauner.

?The Janus case could affect our ability to fight for our students with our voices; our ability to negotiate fair contracts for teachers, support staff; our ability to take a look at what?s best for students, whether it?s classroom environments or curriculum decisions,? IEA member and teacher Unique Morris said.

?It?s an attempt to break up unions and strip away the voice that we have that fights not just for students, but for parents and the communities that we service,” said Morris.

At the rally, speakers talked about the need for unions and even referenced the recent topic of arming teachers in schools.

“It has been the unions that has fought to keep our schools and we will continue to fight and we will do without guns in our hands,” said Crysta Weitekamp, a teach in Springfield.