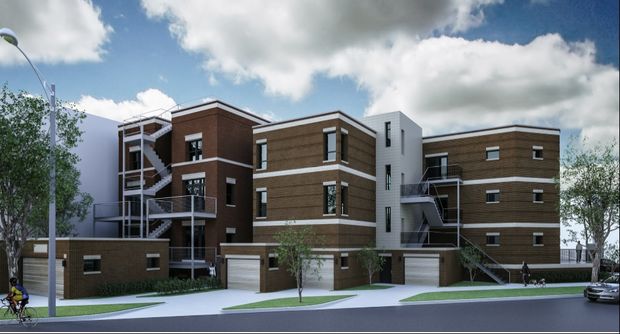 via Our Urban Times
W

It takes a lot to bring something new to a community and, after months of minor adjustments and compromise, an influential group of neighbors has approved a plan to brings seven condos to the corner of Schiller and Evergreen at the site of the collapsed Mision Cristiana church.

Wednesday, the neighborhood group took to a vote and Ed Tamminga, chairman of the Wicker Park Committee’s preservation and development subcommittee, said the results were largely in favor of the plan with a 12-1 majority, according to DNAinfo.

RELATED: Redesigned to alleviate wind concerns, Vista Tower will soon be one of the most advanced high rises in Chicago

“It looks like it is going to proceed and hopefully everyone is reasonably content with it,” Tamminga told DNAinfo.

This positive move forward comes following the group’s smaller subcommittee’s approval of architect John Schiess’ designs for two neighboring condo buildings offering four duplexes and three condos, respectively, at 1909-1911 and 1907 W. Schiller St. in Wicker Park. With things being received well, it looks as though plans will move forward with the support of the community.

The design features three, rather than the originally planned four, brick and limestone buildings with curved glass windows overlooking the corner and a reduced height. The unique triangular shape of the lot posed a challenge for parking availability, but Schiess designed for 7 garages alongside the buildings.

RELATED: Chicago?s Union Station is getting a massive rehab project, that comes with a hefty price tag

After receiving the support of the community, Ald. Joe Moreno (1st) said Monday he will support the project as well now that it has gone through the approval process of his constituents.

“This is a good example of the community working with the developer, and vice versa, to obtain a positive outcome for the neighborhood,” Moreno told DNAinfo.