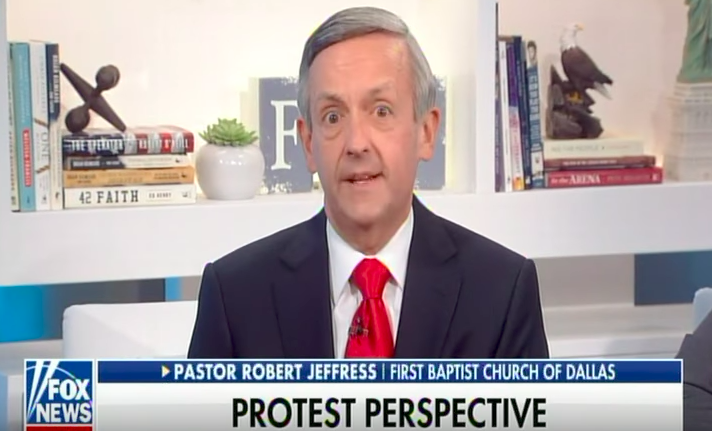 During a Monday appearance on Fox and Friends, Dallas Pastor Robert Jeffress made some incendiary comments about the current debate over the NFL protests.

?I think what these players are doing is absolutely wrong,? Jeffress said on the show. ?These players ought to be thanking God that they live in a country where they?re not only free to earn millions of dollars every year, but they?re also free from the worry of being shot in the head for taking a knee like they would be if they were in North Korea.?

RELATED: Chicago police officers take a knee amid NFL controversy — now they will face the consequences

Jeffress went on to back President Donald Trump’s decision to criticize the protesting players, saying he believes “tens of million of Americans” agree with him. Trump called for a boycott of the league and for the NFL to either fire or suspend the protesting players, calling them “sons of bitches” that were disrespecting our nation’s heritage.

The protests are just as much of an indictment of Trump as police brutality. For his part, Trump has continuously leaned into his stance and made matters worse.

The issue of kneeling has nothing to do with race. It is about respect for our Country, Flag and National Anthem. NFL must respect this!

Jeffress compared the protests over the issue of race to Christian bakers making cakes for same-sex weddings, saying they didn’t “call the president a bum.” Jeffress sits on the president’s evangelical advisory committee, and said previously that God has given Trump the authority to take out North Korea.

?In the case of North Korea, God has given Trump authority to take out Kim Jong Un. I?m heartened to see that our president ? contrary to what we?ve seen with past administrations who have taken, at best, a sheepish stance toward dictators and oppressors ? will not tolerate any threat against the American people.?

Then again, he also wrote a book about Barak Obama clearing a path for the antichrist.