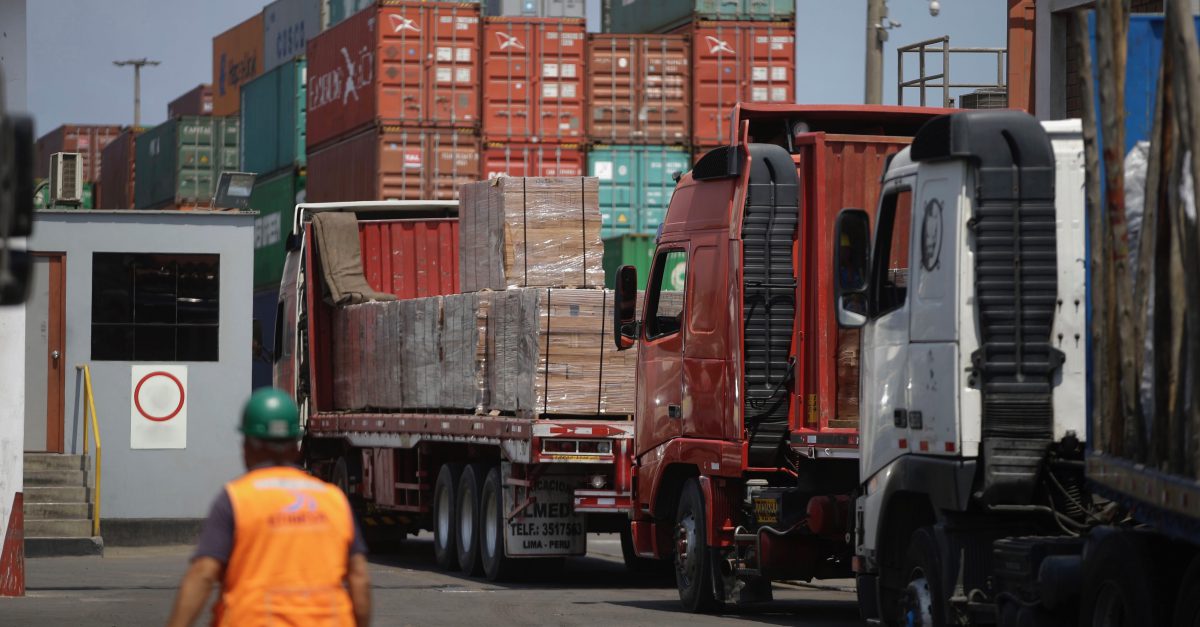 AP Photo/Martin Mejia
In this photo taken in Feb. 20, 2017, a customs agent observes the arrival of trucks with wood from the Peruvian Amazon at the port of Callao, Peru. Inspections to detect criminal timber harvesting operations were scaled back following the halting of 1,770 metric tons at the Port of Houston in October 2015 in a rare blow against illegal logging. Prosecutions of illicit logging in Peru have barely advanced since, while officials who signed falsified logging permits for years remain on the job. (AP Photo/Martin Mejia)

A recent report showed the Port of Houston handled more than 2.4 million shipping containers during 2017, a new record for one of the nation’s busiest ports.

The total reportedly represents a 14 percent increase over the previous year, with experts attributing the increase both to the strong Texas economy and to the completion of an expansion project for the Panama Canal.

The Panama Canal expansion, completed in June 2016, came at a reported cost of over $5.3 billion; experts say its expansion allowed for larger container ships from Europe and Asia to deliver more imports to U.S. ports.

According to records, American ports handled more than 20 million of the 20-foot standard shipping containers last year, an increase of 7 percent over from 2016.

Ricky Kunz, the port’s chief commercial officer, told a Houston newspaper the canal expansion “has made a huge difference for us. We are continuing to build to keep up with demand.”

Administrators said they expanded the canal to handle ships with larger capacities.

For instance, newer vessels are arriving in Houston from Europe, with some ships said to be capable of hauling up to 8,000 shipping containers.

According to Kunz, many of these newer ships are also expected to arrive in Houston from Asian shipping lanes.

Kunz further mentioned the Asian market makes up more than 40 percent of the imports arriving at the Port of Houston.

He said that is ?enormous interest? in adding a fourth East Asian line to the arrivals, after the port added a third at the end of 2016.

RELATED: Take a free tour of the Houston Ship Channel

The increase in shipping also reportedly contributed to an increase in jobs, with the boost has spurring job growth in the transportation and retail industries, as workers move the goods from the ships, to the trucks, to the warehouses, to the stores.