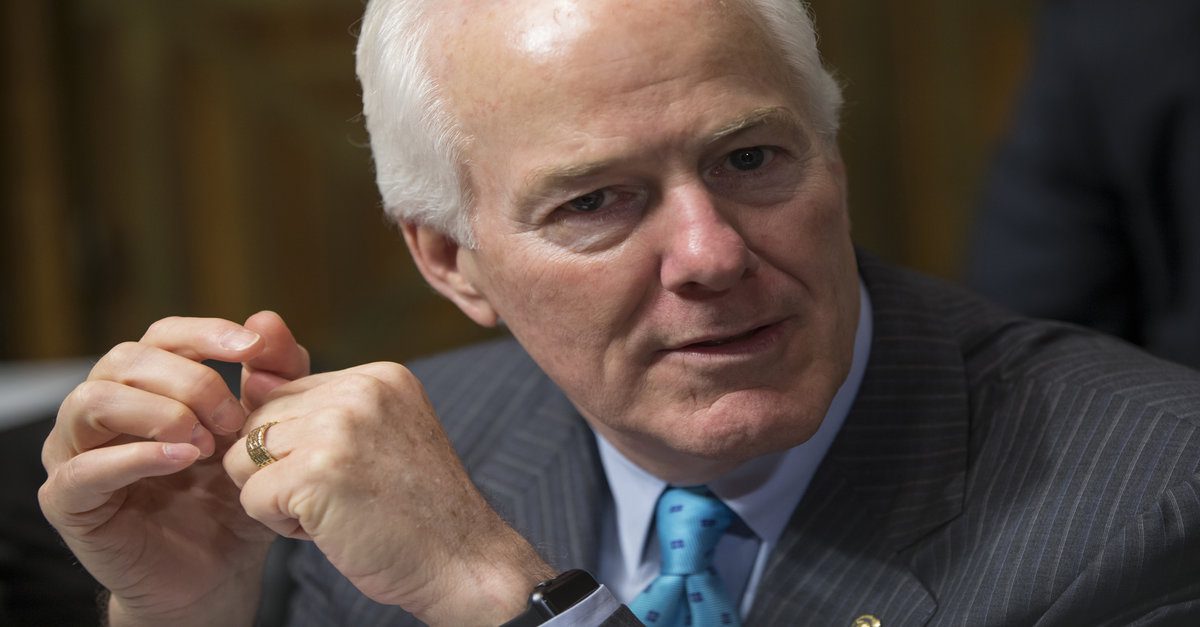 AP Photo/J. Scott Applewhite
FILE - In this March 16, 2016 file photo, Sen. John Cornyn, R-Texas is seen on Capitol Hill in Washington. The Senate passed legislation Tuesday, May 17, 2016, that would allow families of Sept. 11 victims to sue the government of Saudi Arabia despite a White House veto threat and fierce objections from the U.S. ally. The legislation, sponsored by Cornyn and Charles Schumer, D-N.Y., gives victims' families the right to sue in U.S. court for any role that elements of the Saudi government may have played in the 2001 attacks that killed thousands in New York, the Washington, D.C. area and Pennsylvania. (AP Photo/J. Scott Applewhite)

China has a lot of money. Lately, they’ve been spending a lot of it in the U.S. — $30 billion more than usual, to be exact.

Amidst a poised Trump trade war, the uptick reported by the American Enterprise Institute has federal lawmakers from both parties worried and working on legislation to do something about it, including number-two U.S. Senate Republican John Cornyn.

RELATED: Texas ranchers are set to be the first to feel the impacts of Trump’s trade policy

According to a report by the Washington Examiner, the Republican Whip is drafting a bill that would expand power for the super-secret Committee on Foreign Investment in the U.S. CFIUS is authorized to review the effect of certain business transactions on national security. Basically, if a foreign person or entity makes a transaction to control a U.S. business, this committee could request a closer look.

CFIUS hasn’t met in almost a decade, but Cornyn’s legislation would require the anonymous group of board members to come up with a list of “countries of concern,” which could possibly translate to “countries that are a potential military threat.” Cornyn’s legislation would also expand the types of transactions CFIUS can review to include property near military bases.

The Democrats’ version of this legislation, authored by Minority Leader Charles Schumer (D-N.Y.), calls for CFIUS to review deals that may cause “economic” harm.

In addition to their efforts to buy all of Hollywood, China loves to spend their money on building controversial islands and expanding their 2.3 million active-person military. That’s about a million more military personnel than the U.S. has, and we don’t even have any valuable real estate in the South China Sea.

RELATED: Against warnings from China, the United States Navy sets out for South China Sea

AEI Chinese economic scholar Derek Scissors shared his views on the multi-faceted situation with The Examiner:

“I think the president is probably generally in favor of the Chinese investing in the United States. It has the potential of at least creating jobs. It’s not like imports from China, which he thinks is hurting jobs.”