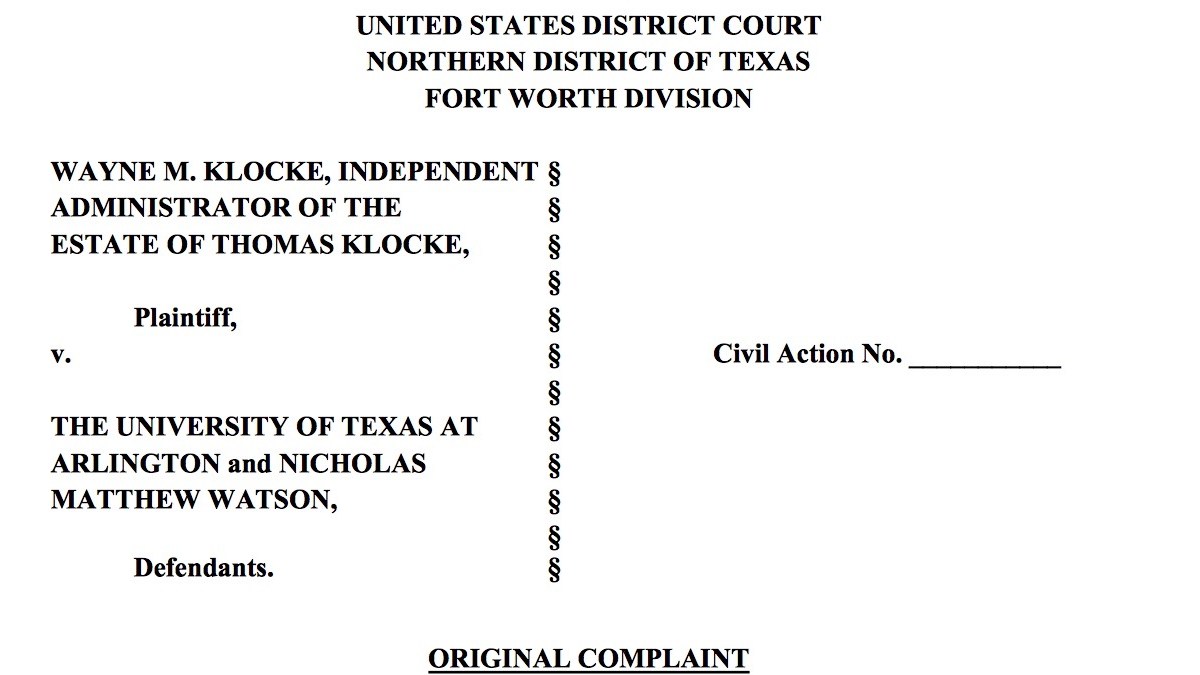 In 2016, a University of Texas Arlington student committed suicide after he was accused of sexually harassing a peer.

Last June, Nicholas Watson accused of Thomas Klocke of writing anti-gay slurs on his computer during a class.

RELATED: Elementary teacher and his husband involved in murder-suicide after allegations of sex with young boys

According to a defamation lawsuit filed against Watson by Klocke?s father, attorney Wayne Klocke, UTA officials did not follow Title IX sexual harassment procedural requirements and instead chose to utilize an improper alternative resolution process based solely on hearsay.

In a nutshell, Watson told UTA administrators Klocke typed ?gays should die? into his computer browser where Watson could see, to which Watson responded by typing ?I?m gay? into his own computer?s search bar.

Watson then claimed Klocke called him a faggot, making him feel ?terribly scared and uncomfortable.?  He added that Klocke further told him to ?consider killing [himself].?

Klocke?s lawsuit, however, claims it was Watson who actually initiated the situation by making ?unwanted sexual advances? toward Klocke before the browser search bar exchange and possibly made up the story implicating him to prevent repercussions for his own possible sexual misconduct.

The complaint indicates Watson told Klocke he was beautiful, prompting Klocke to type ?Stop ? I?m straight,? into his computer, to which Watson wrote, ?I?m gay,? in his own browser in reply.

It additionally states Klocke was never given a chance to defend himself or properly dispute the allegations, and it characterizes the two code of conduct violations he ultimately received as baseless and negligently investigated.

Evidence on this point is based in part on Watson?s close relationship with a student affairs administrator who was soon a lead, biased advocate for the openly homosexual student during the disposition of the alleged exchange and ultimately took control of the divergent disciplinary procedure.

Under Title IX standards and requirements, which provide federal Constitutional protections to students accused of sexual harassment, Klocke was to receive a hearing and impartial representation throughout the investigative process; however, the complaint maintains none of this was provided.

Klocke denied uttering the homophobic slurs up until he was found responsible for harassment, despite an acknowledgement by the potentially tainted investigators of a lack of evidence against him.

Shortly after receiving a disciplinary probation punishment and tarnishing his record for prospective graduate school pursuits, Klocke took his own life.

In an email exchange on the filed suit, Wayne said Thomas had no history of mental illness and believes proper procedures would have preserved due process protections for all involved, especially his son, who he believes received unfair treatment due to his gender:

When a college violates the legal rights of a student accused of misconduct, and its own rules for addressing such a complaint, the accused student can suffer life altering consequences.  The important case of Klocke v. University of Texas at Arlington illustrates just how quickly and arbitrarily a college can act, leading to the most tragic outcome from the unimaginable stress and pain that an unfairly treated, accused student can suffer.  It also serves to underscore why reforms in the campus disciplinary process are so necessary, as recently recommended by the American College of Trial Lawyers, and why accountability through the judicial process may help to promote those reforms.

This isn?t the first case of a Texas university being accused of violating students? due process rights when a homosexual student was involved as a party to the issue.

In a bizarre twist to the already peculiar situation, Governor Rick Perry expressed his outrage that the allegations and technical violations against McIntosh, which were found to be unsubstantiated in part, were acted on so swiftly by TAMU administrators without due process or a proper investigation, allegedly all in the name of promoting diversity under homosexual representation.

UTA officials have not commented on the ongoing Watson-Klocke matter at this time.