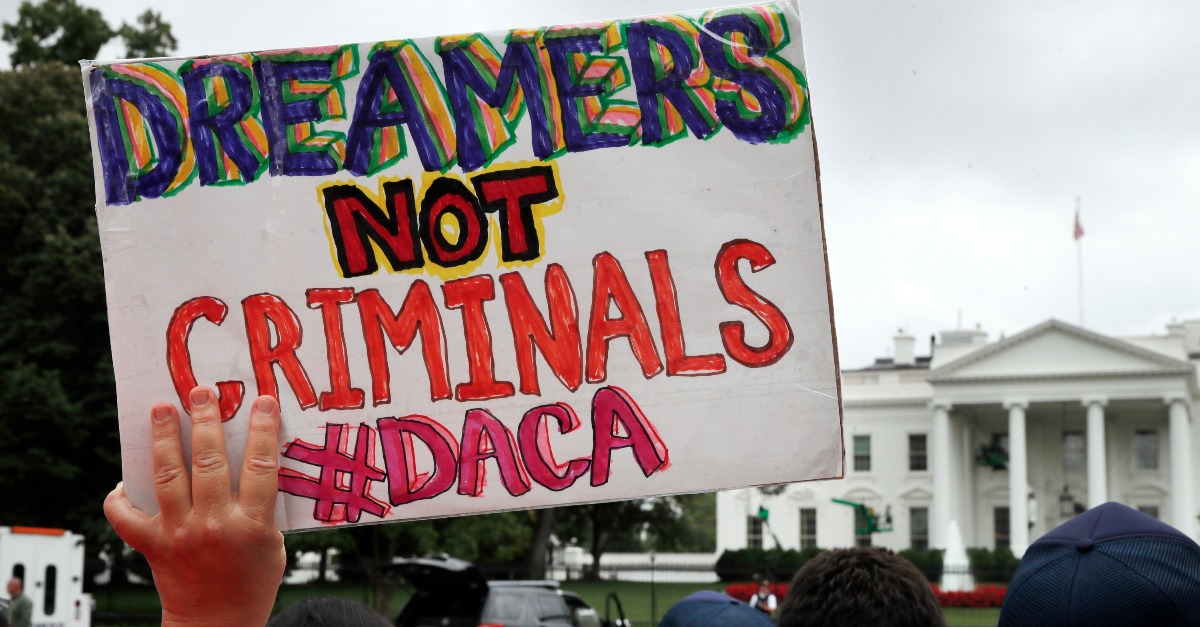 AP Photo/Jacquelyn Martin
In this Aug. 15, 2017, file photo, a woman holds up a signs in support of the Obama administration program known as Deferred Action for Childhood Arrivals, or DACA, during an immigration reform rally at the White House in Washington. After months of delays, President Donald Trump is expected to decide soon on the fate of so called “dreamers” who were brought into the country illegally as children as he faces a looming court deadline and is digging in on appeals to his base. (AP Photo/Jacquelyn Martin, File)

Earlier this week, a group of immigration activists rallied at the University of Houston campus in an effort to show support for undocumented immigrants brought to the U.S. by their parents or without their understanding as children.

Demonstrators reportedly held the rally as part of an effort to get Congress to pass the ?DREAM Act,? a law meant to follow up on a policy to defer any deportation proceedings for the children of undocumented immigrants.

The Deferred Action for Childhood Arrivals, known as DACA, came as a policy instituted by the previous presidential administration allowing undocumented immigrants to stay in the U.S. if they arrived here as children.

Estimates indicate many of these children, known informally as ?Dreamers,” a term technically stemming from a similarly previous-rejected child immigration policy, are now grown to adulthood in the U.S., making American the only real country and culture in their lives.

Many say they possess stories of how their parents escaped from totalitarian regimes, drug wars and constant danger to bring their children to the U.S. in the hopes of leading a safe, normal life.

Currently, the Trump Administration is seeking to phase out DACA, which could leave nearly 800,000 people, including 125,000 in Texas, in danger of deportation.

Congress is reportedly working on a ?clean DREAM Act? to help those who qualify stay in the country, but the bargaining process of partisan politics is said to be slowing those efforts.

RELATED: Trump says no deal on DACA despite what Schumer and Pelosi say

Jose Garcia, a junior at the University of Houston, reportedly came to the U.S. at the age of 3 with his parents.

He spoke at the rally and decried the leaders of both parties for using Dreamers as ?bargaining chips:?

?They?re still human beings that are part of this country and part of the society that we?re living in right now.”