Afraid of being deported, a new report shows Houston’s undocumented immigrants may be avoiding hospitals 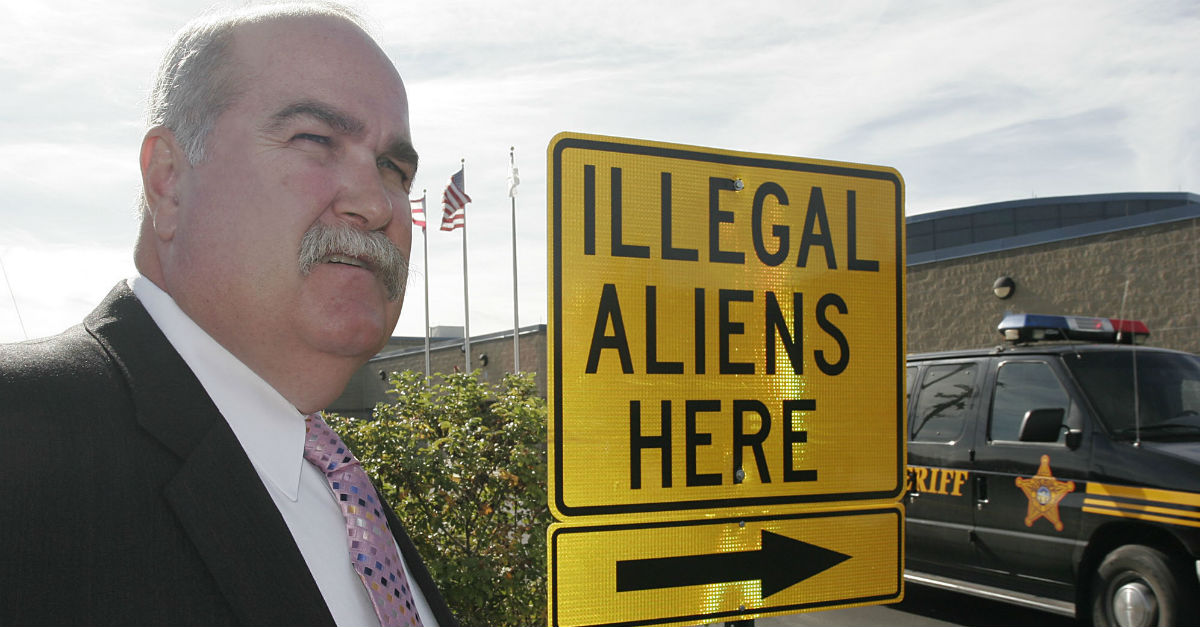 AP Photo/David Kohl, File
In this Nov. 3, 2005, file photo, Butler County, Ohio, Sheriff Richard Jones stands next to a sign with an arrow labeled "Illegal Aliens Here" that he had installed in the sheriff's office parking lot in Hamilton, Ohio. President Donald Trump's supporters could not be much happier with his executive order temporarily banning refugees and immigrants from seven mostly Muslim countries. (AP Photo/David Kohl, File)

Undocumented immigrants in Houston are forgoing their health out of fear, according to a new report by the Houston Chronicle.

The Chronicle details how undocumented immigrants are ignoring phone calls to come in to the doctor’s office or hospital because they don’t want to be deported, which, according to the report, in many cases, would mean being taken away from their families.

RELATED: Undocumented immigrants have targets on their backs from landlords after Harvey

The article goes on to conclude their fears are increasing thanks to stricter immigration laws, with Congress’ and Texas’ latest sanctuary city bills ramping up the possibility of deportation be requiring law enforcement officials to cooperate with Immigration and Customs Enforcement (ICE).

The Chronicle interviewed several persons, as well as health care professionals and nonprofit organizations to get a picture of the situation in Houston:

“The city with the largest medical center in the world shouldn’t have people afraid of seeking medical care,” Francisco Arguelles, executive director of the Living Hope Wheelchair Association, said in an interview.

According to the Chronicle, ICE classifies medical facilities as “sensitive locations,” meaning a raid can’t be conducted there.

However, people are still afraid to go in, with one undocumented person interviewed in the piece saying the following:

“Immigration officers are more terrifying than an illness.”

This fear is said to be leaving serious conditions untreated.

For example, one woman who went by Lorena in the Chronicle piece suffers from a cervical condition, which doctors say could develop into cancer, yet, she reportedly refuses to seek treatment.

Furthermore, El Centro De Corazon, a Houston-based health services organization, reported a drop in the number of undocumented patients coming to them for prenatal care.

This contributes to a snowball effect for both physical and mental health issues, with medications getting skipped, people going without needed psychiatric care and the general health of the population declining, the report claims:

“If we catch it earlier…the cost of care is less, and the treatments are often more successful, and patients will be more likely and able to pay their co-pay, return to work and lead healthy and productive lives wherein they can contribute to our local communities,” Karen Mountain, CEO of Austin based Migrant Clinicians Network, said in an interview.

This could mean more costly procedures down the line and more people likely to end up in the emergency room if treatment is avoided and problems worsen.

“This is not just an immigration issue. This is a public health issue,” Houston Health Department Spokesman Porfirio Villareal said in an interview.