After hours last night, Texas House Members came to a deal and passed an amendment version of the “bathroom bill” 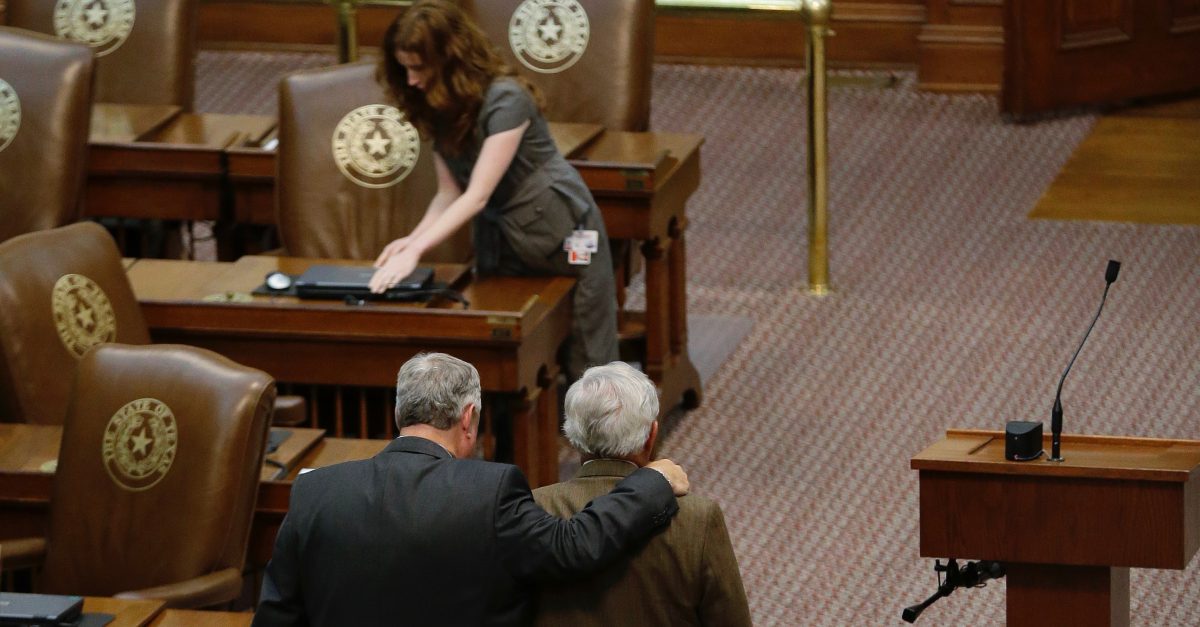 AP Photo/Eric Gay
Lawmakers leaves the Texas House of Representatives after they passes a final transportation funding bill and adjourned, Monday, Aug. 5, 2013, in Austin , Texas. The Texas House has passed a bill and the proposed constitutional amendment that would boost spending for roads and bridges. (AP Photo/Eric Gay)

Late last night, the Texas House passed an amendment version of the controversial bathroom bill, which prohibits, specifically, transgender public school students from using the restroom of their identified, rather than their anatomical, gender.

Working against the clock of the 85th Regular Legislative Session scheduled to adjourn on May 29, the Sunday deal was largely passed along party lines, with many Democrats opposing what they described as a “Jim Crow-era [style] attack” on vulnerable minors, and an opposing, majority-Republican coalition maintaining their amendment deal would not disenfranchise anyone.

Despite opposition to bathroom bills directed toward transgender-related matters from the NBA and NFL, which bring significant sources of revenue to Texas annually, the 91-50 vote count heavily suggests the final vote necessary to pass the bill from the State House will pass, as well.

Here is the bathroom bill amendment that is being debated right now in the Texas House. https://t.co/z32LOU6sKP #txlege #LGBT #transgender pic.twitter.com/cG8DkS4H8l

According to the text of the amendment, effectively, a public school transgender student would be able to use the bathroom facilities of their gender identity only if no other students were present.

The Texas Association of School Boards endorsed the amendment, calling its intended effects “a common-sense solution” and “a solution many districts already use locally.”

“There is absolutely no intent, and I would argue nothing in this language discriminates against anybody,” Republican Rep. Chris Paddie from the Marshall, Texas, area said in an interview. “We want to make sure we provide definitive guidance to our school districts.”

The Paddie deal may be Lt. Governor Dan Patrick’s last chance to get his legislative priority passed before Sine Die – the last day of session – especially after the more generally-directed, broader State Senate version of the bathroom bill died in the lower chamber.

Perhaps in desperation, Patrick recently threatened to hold approval of the state budget and representatives hostage in a special session if a solution is not reached for the bathroom bill.

Earlier this year, North Carolina repealed portions of its own bathroom legislation in a deal similar to the Paddie amendment.

This was largely due to the threat of negative economic impacts – most notably potentially lost revenue from hosting the NCAA basketball tournament, which was threatening to move games without changes to the law.

RELATED: Conroe City Councilman proves why Texas needs SB 6 – the bathroom bill – after getting trapped in a water closet

More than $450 million in NCAA-related profits were earned in Texas during 2016.

Quite a bit to flush away in the morality bathroom. Stay tuned.