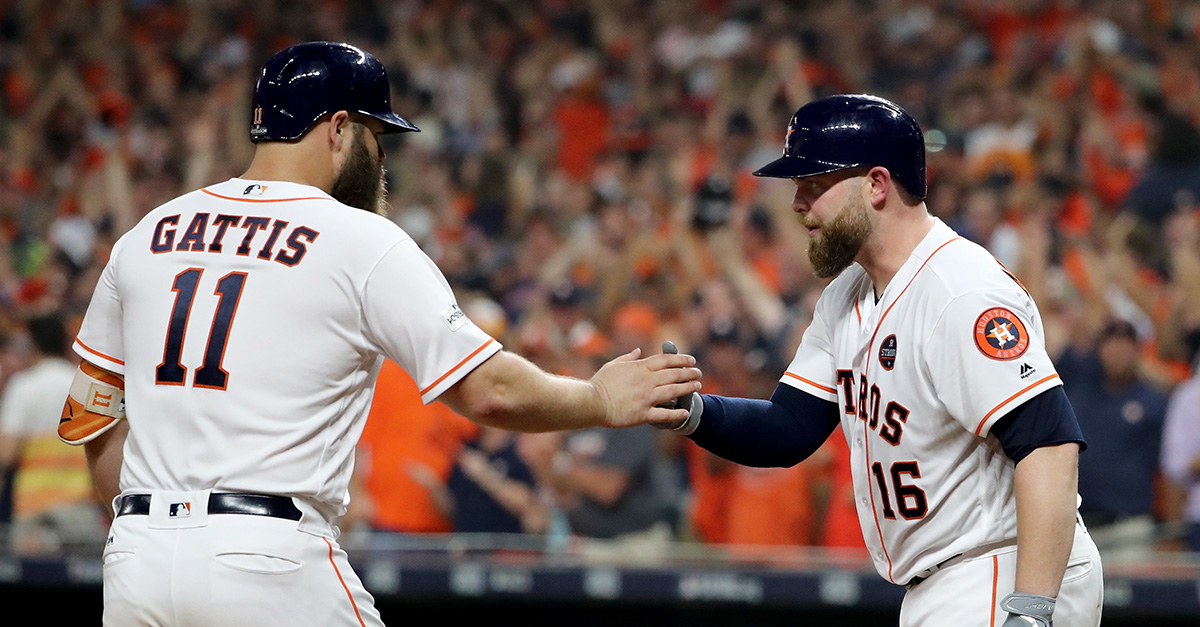 Photo by Elsa/Getty Images
HOUSTON, TX - OCTOBER 21: Evan Gattis #11 of the Houston Astros celebrates with Brian McCann #16 after hitting a a solo home run against CC Sabathia #52 of the New York Yankees during the fourth inning in Game Seven of the American League Championship Series at Minute Maid Park on October 21, 2017 in Houston, Texas. (Photo by Elsa/Getty Images)

When Astros designated hitter Evan Gattis steps into the batter’s box against the toughest pitchers in the game, some fans may feel anxious for him. For Gattis, facing a 100-mile-an-hour fastball or a nasty breaking pitch may seem easy compared to the road he took to get to the big leagues.

A native of Forney, Texas, about 20 miles east of Dallas, Gattis grew up dreaming of playing in the majors. He was offered a scholarship to play first base at Rice University in Houston in 2004, but turned down the offer to play catcher at Texas A&M University.

However, he never wore the maroon and white uniform on the diamond, as he went to rehab shortly after high school to deal with his substance abuse issues. Gattis had been a heavy user of alcohol and marijuana as a way to self-medicate his anxiety and depression issues.

RELATED: Make sure to head out early for the Astros parade Friday

After he left the rehab facility, Gattis took on a number of odd jobs. He was a parking valet in Dallas, a ski lift operator in Colorado, a janitor in Dallas (again), and was briefly homeless in New York. He also made a cross-country trip to California to seek spiritual guidance and counseling.

As he made his way back to Texas, Gattis contacted Drew Kendrick, a pitcher at the University of Texas-Permian Basin in Odessa and Gattis’ stepbrother. Gattis, who had been out of baseball for nearly five years, enrolled at the school and got himself back in the game.

The Atlanta Braves drafted Gattis in the 23rd round in 2010. Gattis made the major league roster in 2013, then was traded to the Astros in 2015.

RELATED: The Astros? World Series win brings a romantic ending for Carlos Correa and his girlfriend

As a team, the Astros struggled through the depths of despair, as they lost at least 90 games from 2011 to 2014. Today, they are World Series Champions.

If any player on the roster reflects the same story of rising from the ashes and reaching the top of the mountain, it’s the man they call ?El Oso Blanco.?