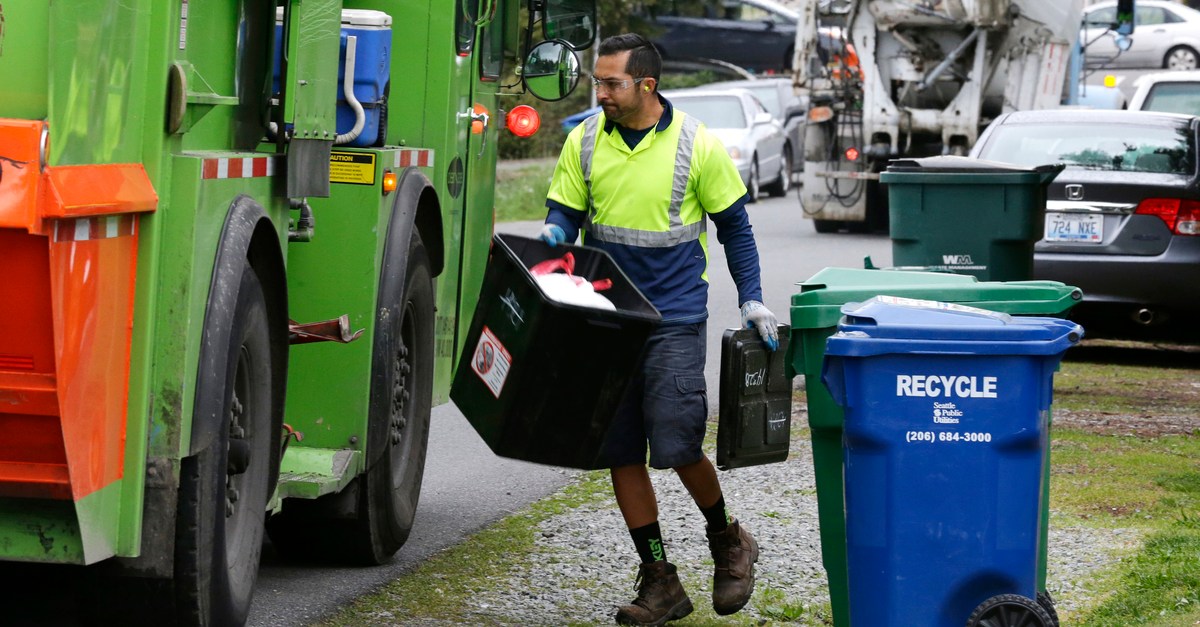 AP Photo/Ted S. Warren
David Morales, a garbage driver with Recology, picks up a garbage container for Seattle Public Utilities, Friday, April 15, 2016, in Seattle. A judge is scheduled to hear a challenge Friday, April 16, 2016, to a new Seattle law allowing garbage collectors to check people's trash to see whether they are disposing of recycling items and food waste incorrectly. (AP Photo/Ted S. Warren)

Bayou City residents will soon be able to help the environment with greater ease, thanks to a new recycling contract approved by the City of Houston:

Beginning in 2019, Houston residents will reportedly once again be able to recycle glass and plastic bags through curbside recycling, saving them that trip to the local recycling plant.

RELATED: Steve Harvey hosts Texas teacher and student she adopted as her son

“This shows the mayor is committed to continuing moving forward to make the city of Houston more sustainable. We’re so happy glass is going to be back and so happy and surprised and excited that plastic bags are now going to be included,” Rosanne Barone, program director for Texas Campaign for the Environment, said in an interview with the Houston Chronicle.

The change comes as the Houston City Council approved a $36.8 million contract with Spanish firm FCC Environmental Services, who will soon replace the current recycling provider.

Since the city’s current contract expires in April, Mayor Sylvester Turner said the city will negotiate a short-term contract with the current provider Waste Management until FCC Environmental opens its facility, which is reportedly expected to be functional in about 14 months.

As part of the 20-year agreement, FCC Environmental officials said their company is building a $23 million recycling facility inside the City of Houston, an investment expected to generate more than 100 jobs.

Some city council members expressed concerns about FCC, however, as well as the bidding process, with critics maintaining other firms could initiate services sooner and for less money:

“I would just like to see this whole thing start over from the beginning and do it properly. Much of the scoring on both the first and second go-arounds was subjective in nature,” at-large Councilman Mike Knox said in an interview. “I just don’t believe that this is the right thing to do in this manner.”

Last June, Mayor Turner selected FCC as the city’s new recycling provider, only to reopen the bidding process because of concerns brought by council members following that round of bidding.