On Wednesday, the Texas Senate passed SB 6, commonly known as the bathroom bill, which requires people to use the restroom of the gender listed on their birth certificate.

Ahead of the 21-10 vote, Pastor Stephen Johnson of the Upper Zion Baptist Church in Marlin offered the daily invocation, in part praying directly for the Senate Members:

“We pray and ask that You would lead, guide, and direct the Senate Members in their decision-making process. We are reminded today that Your word says to lean not to our own understanding, but in all of our ways acknowledge You, and You shall direct our paths. We pray and ask now for wisdom and understanding. We praise You and we honor You, in Jesus ’name. Amen.”

The North Carolina Legislature passed a similar bathroom bill last year, but former N.C. Governor Pat McCrory, who signed the controversial HB 2, has since exemplified the effects of the legislation after the NCAA pulled seven championship events from the state last year, and he was voted out of office during the November election.

SB 6 now moves to the Texas House, where Republican Speaker Joe Straus has continuously voiced his disapproval of the legislation.

“I’m focused 100 percent on the House’s priorities,” Straus said in a statement to reporters last week. “(The Senate has) their agenda; we have ours. We’ll worry about our agenda and making progress on some issues that I think are important to every Texan.”

While the fate of the bill is unclear at this time, last week, a Conroe City Councilman Duane Ham demonstrated the necessity of the bill after he became trapped in a restroom marked for women at a Super Z Food Market. Ham ultimately had to be rescued by the Conroe Fire Department.

At the very least in this case, Texas needs the bill to prevent the clear vandalism shown at :18 of the video that comes with attempting to suppress the embarrassment of being caught using a restroom marked for the opposite sex.

There’s no word on why Ham felt it was necessary to remove the women’s sign, as he claimed the bathroom was originally unisex marked with a men’s sign on the door. He said the men’s sign fell off the door – before he got there.

RELATED: A Dallas broadcaster wrestled with sports and moral authority last week, and he won in two minutes

Given the recent passage of SB 6, Ham’s timing of getting trapped in the closet-sized bathroom could not have been worse for the conservative’s image.

As a reminder, hearsay is evidence offered to the truth of the matter asserted that one cannot adequately substantiate. 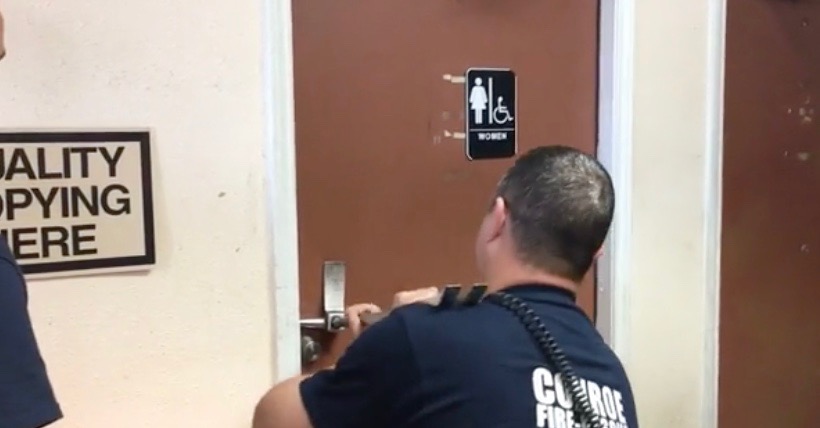