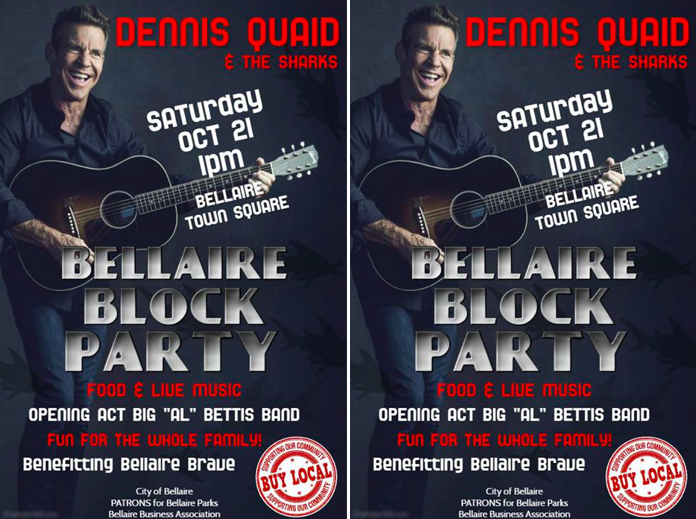 During a telethon for Hurricane Harvey relief, actor Dennis Quaid appeared in a Bellaire High School baseball jersey. He wore the jersey to represent his hometown, a suburb just southwest of downtown Houston. Later this month, Quaid and his band — Dennis Quaid and the Sharks —  will perform at the city’s town square in a benefit concert for first responders and city employees.

The concert will be part of the “Bellaire Block Party” at the Bellaire Town Square on Saturday, Oct. 21, to benefit The Bellaire Brave Fund, a charitable effort that provides assistance for the city’s first responders. Prior to the show, Quaid and his bandmates will tour the city, including Quaid’s elementary school and the baseball field where he was a star pitcher.

Quaid graduated from Bellaire High School in 1972, then went on to study acting at the University of Houston. He dropped out of college to pursue acting full time. He landed one of his first film roles in 1977’s “I Never Promised You A Rose Garden,” where he played a baseball pitcher.

Quaid’s hometown was among those hardest hit by Harvey. According to a Bellaire newspaper, at least 20 percent of the city’s employees were impacted by the storm. Many of them were reportedly helping with emergency management and relief efforts throughout the city, as well as dealing with the damage to their own homes.

RELATED: Someone filmed Dennis Quaid completely losing it on a movie set and you have to see it for yourself

Dennis Quaid and the Sharks have been performing classic rock, country, and soul music songs since 2000. A statement from Quaid’s office said the actor wanted “to give back to the community” and “to give the Bellaire community a break from the devastation” of the storm.