Flushed for now, businesses and sports leagues are praising the death of Texas’ “Bathroom Bill” 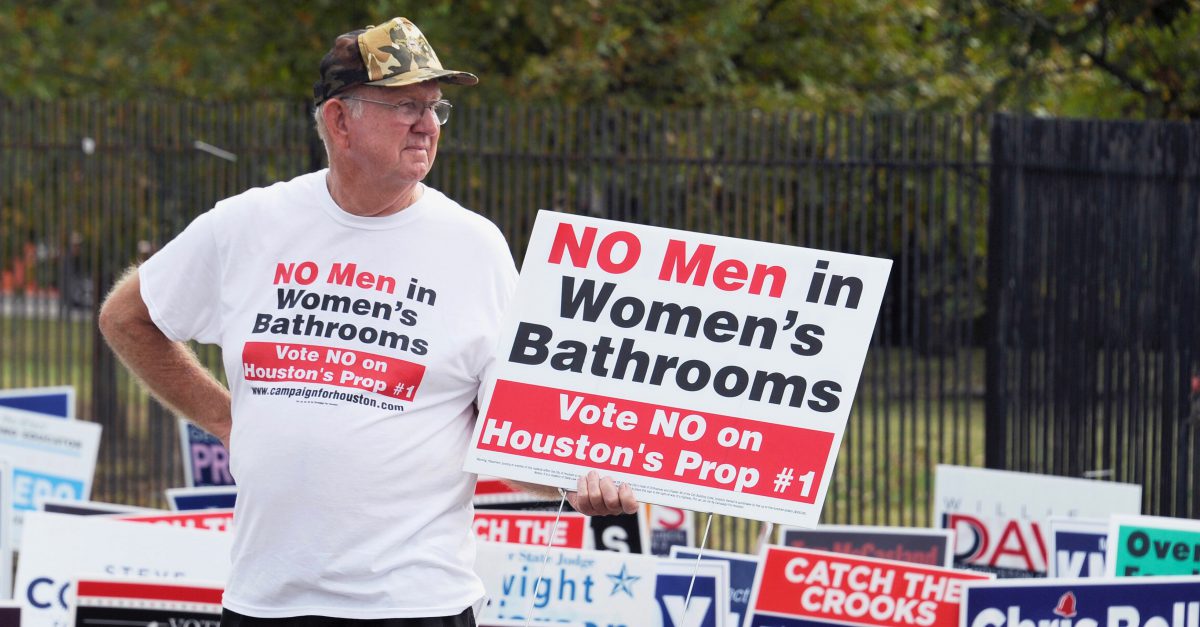 AP Photo/Pat Sullivan
A man urges people to vote against the Houston Equal Rights Ordinance outside an early voting center in Houston on Wednesday, Oct. 21, 2015. The contested ordinance is a broad measure that would consolidate existing bans on discrimination tied to race, sex, religion and other categories in employment, housing and public accommodations, and extend such protections to gays, lesbians, bisexuals and transgender people. (AP Photo/Pat Sullivan)

While powerful conservative leaders, including Governor Greg Abbott and Lieutenant Governor Dan Patrick, backed the measure, the leading opposition came from the third side of the aisle:

Numerous business leaders in industries, ranging from energy to tourism to sports, spoke out against the bill and ultimately contributed to its demise.

If eventually passed, the proposed legislation would require transgender individuals to use public restrooms corresponding to their gender at birth, rather than their gender identity.

Social conservatives proclaimed the bill would protect potential victims from sexual predators, who could claim a different gender identity to find their prey.

The NCAA, maintaining its stand on equality for students, athletes and fans, pulled its postseason events out of the state.

In February of this year, the NBA relocated its annual All-Star Game from Charlotte to New Orleans in protest of the measure.

Amidst the unrest, the Texas Association of Business conducted a study to measure the economic impact of the state’s version of the legislation, finding the state would lose nearly 200,000 jobs and almost $9 billion in revenues.

The NFL claims Texas would not host any more Super Bowls if the measure passed, and, like in North Carolina, the NCAA threatened to change the scheduled 2018 Final Four in opposition of the law.

Texas House Speaker Joe Straus, a self-proclaimed moderate Republican, helped lead the death of the bill on the House floor.

In an interview, Straus told a writer from the New Yorker, “I’m disgusted by all this. Tell the lieutenant governor I don’t want the suicide of a single Texan on my hands.”

For now, the drama of the “bathroom bill” is over. At least until the next Legislature meets in 2019.