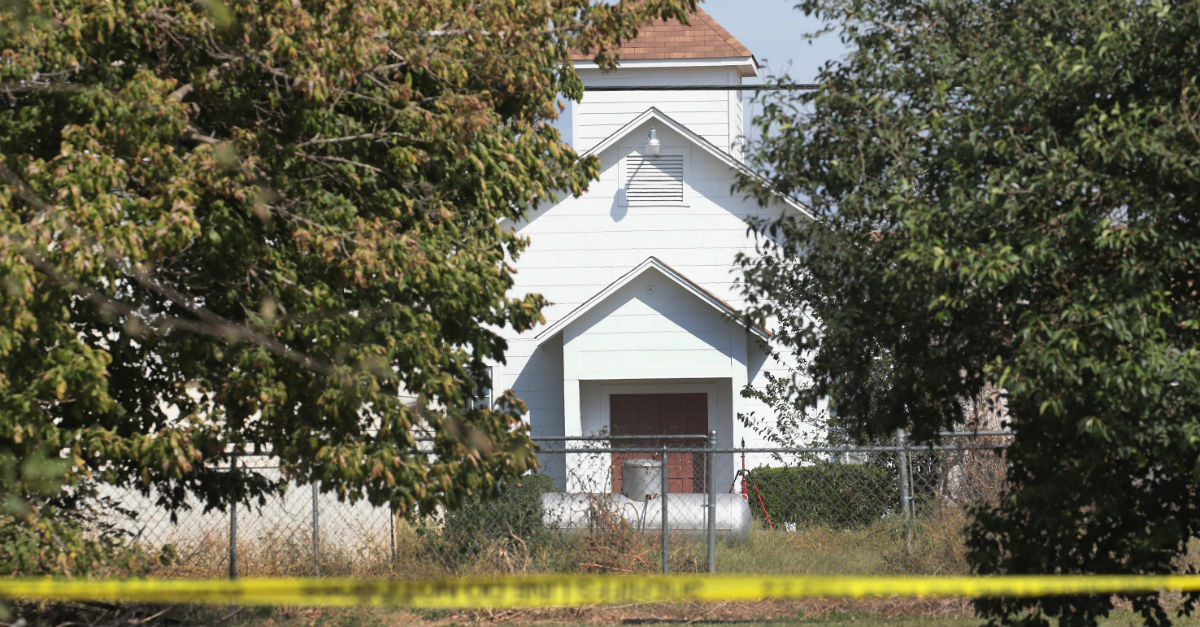 Photo by Scott Olson/Getty Images
SUTHERLAND SPRINGS, TX - NOVEMBER 07: Crime scene tape remains stretched along a road near the First Baptist Church of Sutherland Springs on November 7, 2017 in Sutherland Springs, Texas. On November 5 a gunman, Devin Patrick Kelley, killed 26 people at the church and wounded 20 more when he opened fire during a Sunday service. (Photo by Scott Olson/Getty Images)

Nearly a week after the deadly shooting inside a Texas Baptist church in Sutherland Springs, many houses of worship around Houston are weighing questions of faith against concerns about security.

Local law enforcement agencies, including Harris County Sheriff’s Deputies and Constables, took an opportunity in the aftermath to visit numerous churches around town, where they reportedly spoke with pastors and parishioners, patrolled the grounds and looked for any suspicious activity.

?We?re just out here to be proactive and keep an eye on things,? Harris County Sheriff Ed Gonzalez said in an interview with a local TV station regarding his force’s efforts. ?That?s what we hope to bring, a little bit of comfort.?

Many church leaders are also said to be reviewing their security practices, some reportedly considering permitting members with concealed carry gun licenses to bring their weapons to worship.

At the famous Wheeler Avenue Baptist Church in Houston’s inner city, police officers patrolled outside while male church members known as ?Watchmen? stood in front of the pulpit.

Those at Wheeler Avenue Baptist Church in Houston on Sunday were not afraid to be there, seven days after the shooting in Sutherland Springs. "If I die coming, I know where I'm going." https://t.co/rEZO9k4FZx via @HoustonChron w/ @karenwarrenHC photos pic.twitter.com/5ilVykIu25

?We have plenty of security here,? Herb Quintance, a church member, said in an interview with a local newspaper.

Rev. Dr. Marcus D. Cosby, senior pastor at Wheeler, reportedly gave an energetic sermon about faith, endurance and strength through difficult times after the San Antonio-area incident, during which a gunman killed nearly 30, including several minors, and injured just about as many.

“You can’t buy peace,” Pastor Cosby said during an interview. “You can’t buy joy. He made us to be blessed with firmness to endure. The God we serve will keep you strong.”

Bind First Baptist Church and the community with LOVE. Provide an emotional healing that will restore hope & strengthen their faith in You.

Despite the 180-plus miles between Houston and Sutherland Springs, members at Wheeler Avenue expressed their feelings of closeness and connection to the small-town church:

“Even here in our community, here in our church, we were affected,” Wheeler Avenue member Marcia Curry said in an interview. “They were Christians serving God. ?You still feel for other believers.”