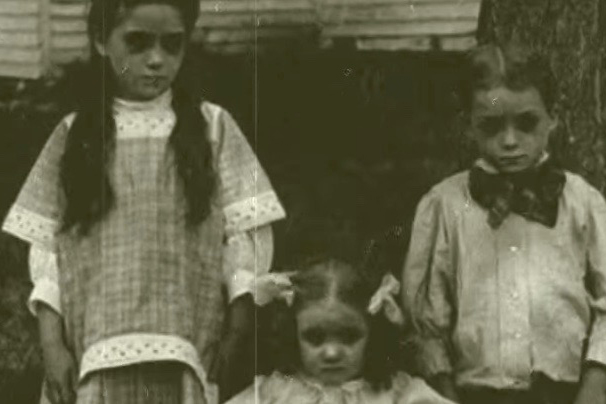 The creepiest urban legends and ghost stories around the world always seem to involve children. A few examples: Gravity Hill. The haunted train tracks of San Antonio. Children of the Corn.

With Halloween come again, there is one Texas urban legend so skin-crawling, you won’t need to go through a cornfield or down a back road for a good scare because, ghost hunters beware, you don’t find the ‘black eyed children.’

Whether you’re in Abilene or Galveston. And trust us, you do not want to make eye contact with these kids.

The Legend of the Black Eyed Kids of Texas

The first recorded encounter with the paranormal creatures, featured above, is posted by journalist Brain Bethel in 1998, with reports and stories of the black eyed children spiking in 2013. So, all in all, a relatively new urban legend.

In his writings, Brian Bethel, a Texas reporter, says being approached by two young boys in the parking lot of a movie theater with a seemingly innocent request: a ride to their house.

Bethel’s story said he stopped in the parking lot to fill out a check to his internet provider but could tell something was wrong from the moment they knocked on his window.

About halfway through the conversation, he figured out what it was: their eyes.

“They were coal black,” Bethel wrote in his report. “No pupil. No iris. Just two staring orbs reflecting the red and white light of the marquee.”

Stories of the black eyed children sightings all describe them as looking young-anywhere from 8 to 18 years old, having pale skin, and always approaching people with a request, whether that be a ride home, a bite to eat, or to use the phone.

Their requests during these alleged sightings of the children with solid black eyes always involve them being ‘let in,’ either to a car or your house. It’s something straight out of a horror film.

Anyone who has an alleged encounters them reports an overwhelming sense of dread and terror coupled with a compulsion to do what the children are asking, finding their hands drifting toward the front door handle or car lock.

Apparently, the black eyed children are akin to vampires, meaning they can’t come in unless an unknowing human, evidenced by the last words of one Bethel claimed he heard as he tore away from them in his car:

So, if you happen to find yourself alone in Texas, even after Halloween, and an innocent-looking child with an impeccable grasp of language and night-black eyes shows up at your door, maybe don’t let them in.

They probably aren’t looking for candy. We advise leaving these kids on the doorsteps of residential homes.

This article was originally published November 1, 2017.

RELATED: The Most Haunted Hotel in Texas is Right Outside Houston, and They’re Taking Reservations