History earned — A city, a team, and the trophy decades in the making 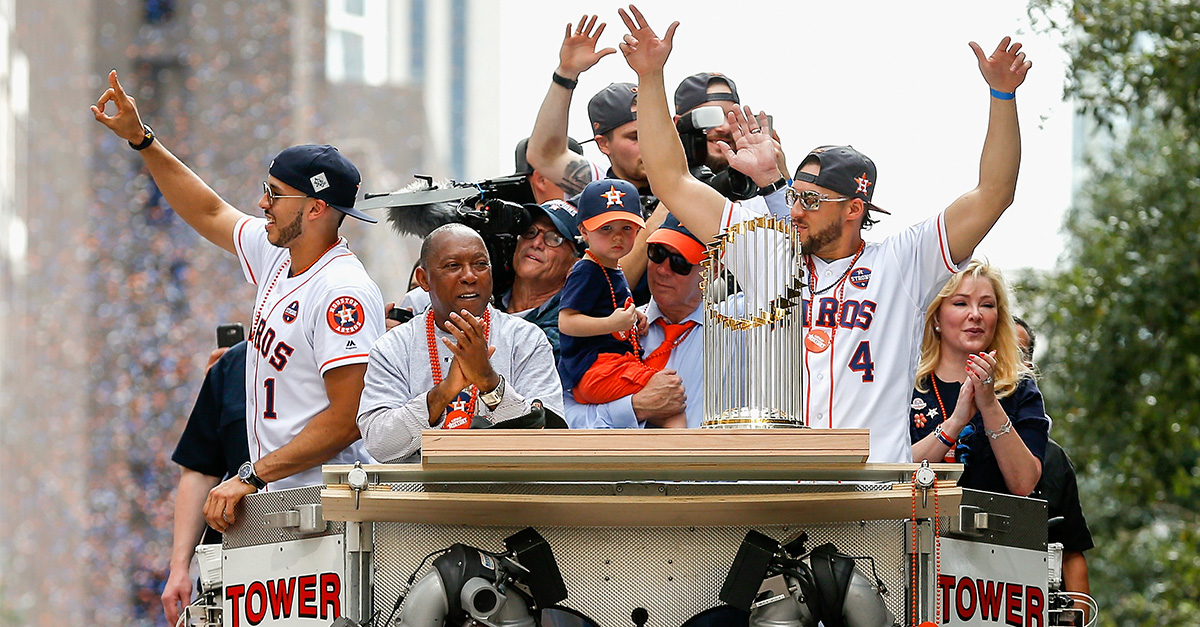 Mayor Sylvester Turner and the city of Houston hosted a parade to celebrate the win, inviting all of Crush City to take part in the festivities.

People began lining up along the parade route on the night before the big day, and the streets were already teeming as the city set up on Friday morning.

We arrived at city hall to walk the parade route early on the big day.

As we traveled along the sidewalks meeting fans — some of whom had camped out overnight along the route to get the perfect spot — we found two World Series trophies.

Rick Morales made his trophy as soon as the Astros won the pennant.

Clearly, Morales has sway over the sports gods.

Morales was joined by his sister Mildred Morales and family friends Angela and Victoria Hair.

Mildred Morales believes that this win will finally put Houston on the map, giving us a much-deserved reputation as a sports powerhouse.

“It gives us a spot in the sport’s arena,” she said, “We never get credit, and we should. We’re a city with good teams, always the underdog. People talk down about us, but they can’t anymore.”

“The World Series was more than just a game for Houston,” Rodriquez said, calling the series the greatest of all time. “We all knew that they had it in them.”

All along the parade route, families laughed and played together, showing that there’s more to baseball than just bats and balls. There’s a shared history there, and the World Series win gave fans their biggest memory yet.

Happy to have this moment to share with younger generations, Lashawn Harris arrived early to the lawn outside City Hall, her granddaughter and nieces in tow.

“The win means everything to me, and now my grandbaby has lived to see that,” Harris beamed.

She, her granddaughter, and nieces De’shae Harris and Kaylah Ray dressed in their Astros gear for the parade, even wearing ribbons around their heads.

As much as she enjoyed the series, Harris admitted that it was stressful at times.

“I lost a lot of sleep,” she laughed.

Her granddaughter, Tahven Thomas, says she kept up her energy by eating candy.

Another fan brought a special item from his past to the parade — a canvas he painted in honor of the Astros.

Rodriguez started playing t-ball as a child, which led to a love of baseball. His family, who is from Mexico, has two favorite sports – baseball and soccer.

Houston transplant Stephanie Keogh, who works in the marketing and communications department at Houston Methodist, was quick to volunteer to work the parade when the opportunity came up.

Since her father has always been a fan of the team, loving the Astros is Keogh’s blood.

Keogh showed us her lucky Astros socks, which she wore to all of the games she attended.

“They always won when I had them on,” she said.

Since baseball is such a superstitious sport, it’s no surprise that Keogh wasn’t the only fan we talked to who tried to stay on the right side of luck.

For Alicia Zolan’s family, it was a lucky spot for watching the game.

“My cousin had to stay over because the Astros won while she was watching with us,” Zolan laughs.

Born in Houston in 1993, Zolan has been an Astros fan since birth.

Her favorite part of the World Series was the last out, which was filled with adrenaline and anticipation.

Elma Coker and her son Joseph attend the parade together, arriving early to secure a good spot near the front of the parade route.

“The Astros winning the World Series brought Houston back to life,” Coker beamed. “It feels awesome.”

Since Joseph turned 11 on the same day the Astros’ won the championship, the win will always be extra special for the family.

“Baseball is something we do together as a family,” Coker says. “I’ve been a fan for 40 years.”

A fan since 1973, Felton has waited a long time to see the Astros win the World Series.

“I wish the fans who couldn’t make it out here today could have,” Felton told us.

“Keep following them. ” Flowers added, ” We’re going to earned it again next year.”

While the Astros may be celebrating their big win at Disney World soon, the Lopez family watched the World Series from the Magic Kingdom.

Evelyn and Stephen Lopez attended the first Astros home game after the World Series, so the win was special to them.

“Houston is so thankful to our Astros,” Evelyn says.

The Lopez family are all big Houston fans. The family were attending the parade together, including their grandsons, Nolan and Joseph.

Downtown Houston was packed with so many people on Houston Astros Day that it felt as though the entire city had come to celebrate history being made.

We all did this together, Houston.

We are Houston Strong, y’all.