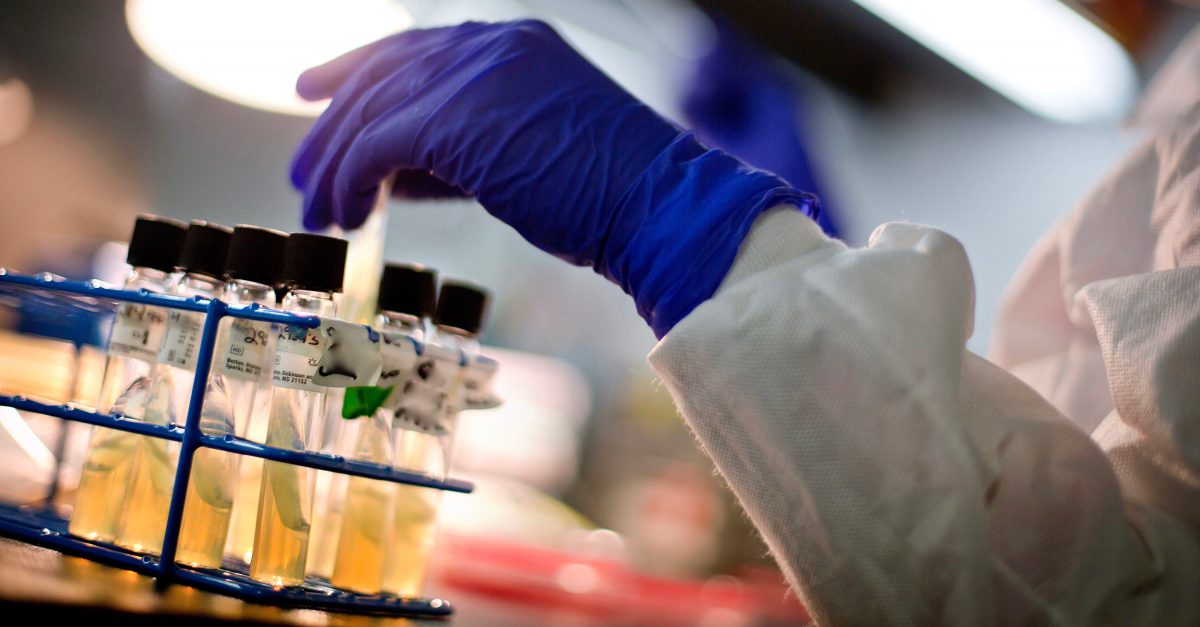 AP Photo/David Goldman
Microbiologist Tatiana Travis works with tubes of bacteria samples in an antimicrobial resistance and characterization lab within the Infectious Disease Laboratory at the federal Centers for Disease Control and Prevention, Monday, Nov. 25, 2013, in Atlanta. (AP Photo/David Goldman)

Earlier this month, officials with Houston-based Celltex Therapeutics Corp. announced they will be working with researchers at Texas A&M University’s Health Science Center College of Medicine Institute for Regenerative Medicine to look into potential treatments for Alzheimer’s Disease.

The treatments will reportedly involve much of Celltex’s research into stem cells, a type of cell which can create cells of another specific type, such as brain, bone or blood cells.

Dr. Darwin Prockop, director of the Texas A&M Institute for Regenerative Medicine and professor at the Texas A&M College of Medicine, a researcher of stem cells for more than two decades, provided a press release announcing the arrangement, which will initially involve animal trials, with human trials potentially ready in as little as three years.

While Texas A&M will provide the research efforts, Celltex is reportedly supplying the banks of stem cells individuals are able to extract, for researchers to use in their experiments.

Celltex came into national prominence in 2011, when Rick Perry received treated for back pain with stem cells the former governor banked at Celltex.

Despite the hype, however, the treatment brought Celltex under scrutiny from federal regulatory agencies:

In 2012, reports show an inspection by the U.S. Food and Drug Administration found the stem cells in Celltex’s labs underwent “more than minimal manipulation.”

The agency also ruled the treatments constituted an illegally marketed drug treatment; according the Celltex CEO David Eller, the company since revised its practices and is now in full compliance with FDA regulations.

This time around, research will reportedly involve adult stem cells from patients’ own bodily material, as opposed to efforts involving embryonic stem cells – the type responsible for generating previous controversy.

Scientists will determine if exosomes, a substance within stem cells, can deliver treatments to patients with brain tissue damage from Alzheimer’s.

This is a developing story, as well as a cellular pun.

Editor’s Note: An earlier version of this article mistakenly claimed Celltex worked with embryonic stem cells.  As clarified in an e-mail with a company representative:

“The Celltex process does not involve donors (in this case, embryonic stem cells). An individual has his or her own autologous MSCs extracted, and their own MSCs are then multiplied and banked for future therapy for use by that individual only. An individual can then use his or her banked stem cells for regenerative therapy through infusions or injections performed by a licensed physician in Cancun.”