Los Angeles-based startup company Hyperloop One announced the Houston-Laredo-Dallas route as one of the ten global finalists for potential route development.

A hyperloop is an underground system made up of vacuum sealed tubes that run between destination cities. Passengers would be transported in pods that could move at very high speeds due to a lack of resistance from air pressure.

Both people and cargo would be moved using the hyperloop system via magnetic levitation-or ‘maglev’–an idea originally proposed by Tesla CEO Elon Musk.

At 640 miles, the Texas hyperloop would be the longest US hyperloop route of its kind. Only three other routes were identified in the US, along with two in the UK, one in Mexico, two in India, and one in Canada.

How fast is it? If a hyperloop connecting Dallas to Houston is built, commuters could make the journey in less than an hour, according to click2houston.com. That’s already incredibly fast, but even more so when you consider it takes about four hours by car non-stop.

Next steps for all the finalists include an in-depth analysis of each route to determine its viability. Hyperloop One will collaborate with applicants  to look at things like projected ridership and each applicant’s business plan.

The company will be holding workshops in each host country to establish partnerships with stakeholders, according to TechCrunch.

Hyperloop One wants to have three hyperloops up and running for commercial use by 2021.

RELATED: Could Elon Musk sell this idea in the Lone Star State? 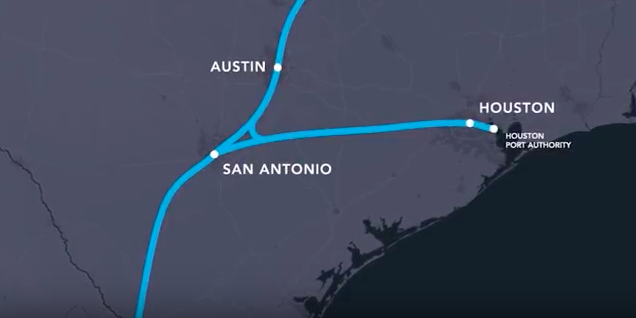